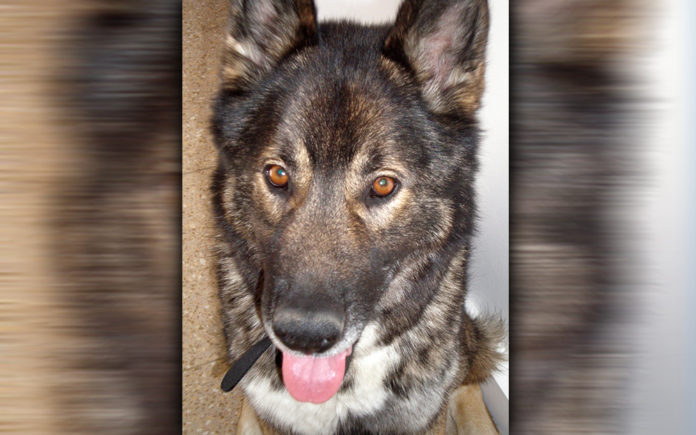 He was a magnificent animal, with a beautiful fluffy coat that hinted this German Shepherd might be part Malamute.  Incredibly, he was not adopted after a month at the San Bernardino City Shelter.  Volunteer Magen Arquette took a special interest in the Shepherd, and named him Miles.  Magen requested and received an extension for his time there, but now that time was running out.

It was April, 2012, and social media was beginning to network and save more shelter animals from euthanasia.  I saw Miles during a shelter visit to pick up a small size dog for www.lovingallanimals.org.  Spending some time with him in a visiting area, I was amazed at how this handsome dog was perfectly command trained.  He appeared younger than the 7 years stated on his kennel card.  A couple referred to me through Loving All Animals requested a German Shepherd, and I enthusiastically told them about Miles.  They told me they loved the look and description of Miles, and assured me they would go and adopt him the following day. 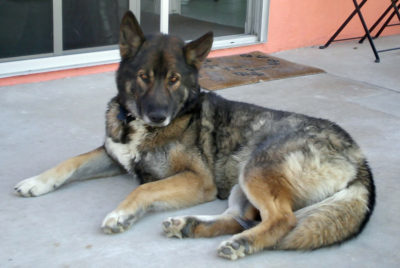 However, the emails and Facebook postings late afternoon the next day sounded grim for Miles’ fate.  I called the shelter and learned Miles was still there.  The prospective adopters did not answer their phone. The shelter closed at 5pm and they stopped showing dogs at 4:30pm.  I grabbed my car keys and purse and raced out the door, Coachella Valley sand storm that made visibility on the 10 freeway almost impossible.  More delays occurred from the rush hour traffic near San Bernardino.  I worried I might not get there in time to save Miles.

Thankfully, I arrived before the shelter closed, and the helpful shelter staff handed him over.  Being unprepared, I had no large size collar or leash for Miles, who took off with the flimsy lead provided and chased after a cat in the shelter parking lot.  Finally he got into the car, and we headed out on the happy “freedom ride” home.

Two offers came in from prospective foster parents to take Miles during the trip to rescue him.  One came from Adell Lantz and another from a couple who had fostered a couple large dogs for Loving All Animals, Curtis Sweesy and Vanessa Ruggles.

Vanessa recalls, “He was such a sweet and easy dog.  Because fostering Miles was such a positive experience, we have continued to foster more dogs for over 7 years now, and those 30 dogs included 17 German Shepherds.  We’ve also adopted three German Shepherd dogs of our own, including two seniors.  His first night here, Miles jumped on the bed and made himself right at home.  Miles was so comfortable wherever he was, moving with us when we bought a house, he took everything in stride.  When he was neutered, I could not get him to take a pain pill even though he was crying from pain.  After trying everything including peanut butter and cream cheese, I finally wrapped a pill in prosciutto and this classy guy gobbled it down.”

In May 2012, Miles was adopted to his forever home with Carly and Hector Ramirez.  Sadly, we just received the update that Miles recently passed away, but his transition was a peaceful one during his sleep.  Miles was a special part of their growing family, and Carly reports, “Miles was a great dog, and our kids absolutely loved him!”

German Shepherds are one of the smartest dog breeds, used in search and rescue missions, working side by side with law enforcement officers, and helping our military in combat where they often lay down their lives to save our troops.  This breed is almost always “family friendly,” great with children, while also providing calm companionship for seniors.

Why are there so many German Shepherd dogs in our public shelters?  It’s heartbreaking to see them discarded and unwanted.  Sometimes these dogs don’t mature until about 3 years, and some folks can’t handle their large puppy energy.  As do all breeds, they require training and socialization, and they love feeling like part of the family.

Miles’ legacy continues as Curtis and Vanessa continue to love and foster these special German Shepherds.  Their dining room wall is filled with photos of their many foster dogs, truly a Wall of Love.