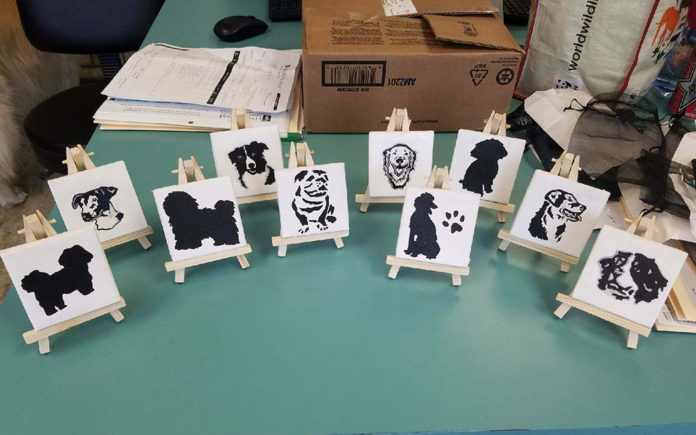 A new venture in the Coachella Valley can make you a custom portrait of your fur-babies. Mini Pup Paintings by Caleb Marie Cruz offers small paintings of your pet on easel stands, perfect for putting on a desk or dresser. “I came up with the idea probably about four or five months ago when I made each one of my coworkers a portrait of their dog,” Cruz says.  “I work at Paws and Claws Urgent Care, I’m a registered vet tech there, and we had a work meeting one day and I presented that to them.” 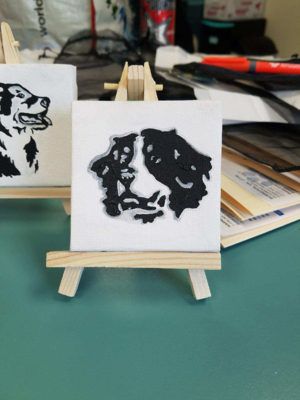 After receiving the gifts, many of Cruz’s coworkers put the portraits up at work, where they were noticed by clients. Kay, the owner of The Village Pup boarding facility in La Quinta, was among those who asked about portraits. “He basically got me started. He came into my work one day and saw the paintings and just thought they were really cool and we worked out a deal where I made a bunch of them for his clients… I kind of started it from there.” Cruz explains. “I’m getting pictures from people and I’m kind of creating either profiles or stencil-like paintings on mini canvases.”

Now, Cruz works with The Village Pup to do portraits for their clients and still receives requests from clients of Paws and Claws Urgent Care, saying “I have a couple paintings in the lobby area… some people that are interested in my work will see what I can do just sitting on the front desk and then they can ask me to paint one of their dogs.”

In addition to this, she’s decided to begin actively seeking clients. “I’m going to be going around various small businesses like… more boarding facilities… grooming facilities, and I’m going to have business cards,” she says. “They can email me a picture of their dog so I can kind of get their markings down at least. It doesn’t have to be a perfect picture… and then I can go from there.”

Cruz is also open to painting portraits of pets and animals other than dogs. “I can do cats, I can do different types as well… I was thinking about doing even like different species… butterflies or something like that. The canvasses are only about 3X3 and they come with an easel attached to it,” she says.

Although Cruz has been painting for a long time, this is her first attempt at creating a business from it. “I’ve been painting for almost 10 years. A lot of it I just do as gifts for my friends. I’ve always been kind of nervous about getting out there and going to the street fairs and all that. My first painting that I actually sold was at the Benefit for the Homeless about three years ago and my painting was auctioned off at $200,” Cruz says. “I do a lot of colorful paintings… Day of the Dead… I’ve done Tree of Life, things like that,” she notes.

For now, Cruz wants to continue doing her Mini Pup Paintings, saying “I think I would just stay simple for now because I think that’s the appeal to the Mini Pup Paintings is that they’re so simple but yet you’re getting an almost cartoon character of your own pet which is really cool. So even if the breed is like a boxer, if the boxer has certain markings that’s what makes it so special.”

To further her business, Cruz hopes to get a booth at one or more of the local street fairs and continue building relationships with local businesses, such as other boarding facilities and grooming shops. In addition, Cruz hopes to build a steady client base as a freelancer.

To contact Cruz about doing a Mini Pup Painting, email minipuppaintings@yahoo.com. Prices are $20 each or $15 each when you order 5 or more.