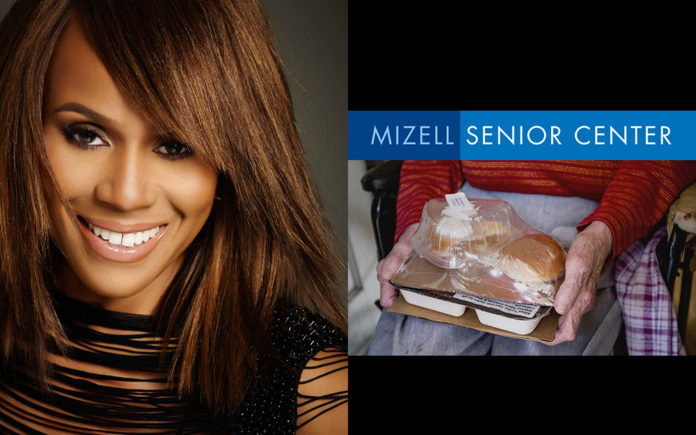 The Mizell Senior Center invites you to experience the style and elegance of the famed Fontainebleau Hotel in Miami Beach at the 14th annual Stars Among Us Gala on Friday, February 22, 2019 beginning at 5:30 p.m.  Presented by Eisenhower Health and Patti and Jack Grundhofer, the powerful voice of Deborah Cox, star of the hit musical adaptation of “The Bodyguard,” will soar throughout the Palm Springs Air Museum in “I Will Always Love You,” Celebrating the Music of Whitney Houston.  All proceeds from the Gala benefit Mizell’s Valley-wide Meal On Wheels program.

Co-chaired by Geoff Kors and James Williamson, Cyma and Leo Cohen, Carol and Dr. Ronald Fragen and Dennis Flaig and Clinton Moore, the Stars Among Us Gala will honor the Desert Healthcare District with its Shining Star Award and will present the Galaxy Award to Ginny Foat, upon the announcement of her retirement.

The Desert Healthcare District will be presented with the Shining Star Award in recognition of its dedication to the Mizell Senior Center as a steadfast partner of over 20 years. The District’s mission of achieving optimal health at all stages of life is reflected in the robust programs and innovative services it has funded at Mizell.  Accepting the award will be Desert Healthcare District Board Member, Les Zendle, MD.

Longtime Executive Director, Ginny Foat, who is retiring in March, will receive the Galaxy Award in honor of her extraordinary leadership and lasting contributions.  Ginny’s vision, expertise and drive reshaped Mizell’s future, reinvigorated the organization and are responsible for the launch of the groundbreaking Falls Prevention program and the Valley-wide Meals On Wheels program.

Attendees of the Stars Among Us Gala will be transported to the larger-than-life glitz and glamour of Miami and the famed Fontainebleau Hotel. Deborah Cox, making her first appearance in the desert, will be performing in a show created especially for this evening, “I Will Always Love You,” Celebrating the Music of Whitney Houston.  The Grammy®-nominated, multi-platinum R&B/Pop recording artist and actress received rave reviews in London’s West End and throughout the U.S. starring in the role of Rachel Maron – originally played by Whitney Houston – in the new musical, “The Bodyguard.”

About Mizell Senior Center and Meals On Wheels:

Mizell Senior Center has been serving the greater Palm Springs area for over 40 years, and is an acknowledged leader in active aging.  Mizell’s welcoming space and multi-faceted network of programs and services offer community and kinship for seniors from diverse backgrounds and life experiences. From daily lunch service in the Center’s dining room to the computer lab, fitness programs, multiple classes in the creative arts, weekly jam sessions and its pioneering Falls Prevention programs, Mizell’s on-site activities are a vital resource for actively aging seniors.

The Stars Among Us Gala raises much-needed funds to continue Mizell’s efforts to feed homebound seniors in the desert – a program well-known as Meals On Wheels. Mizell operates the largest Meals On Wheels program in the Coachella Valley.  This past year, Mizell’s dedicated staff prepared and delivered 182,971 hot, nutritious meals to homebound seniors and nine congregate meal sites over a vast west-to-east service area from Whitewater to the Salton Sea.