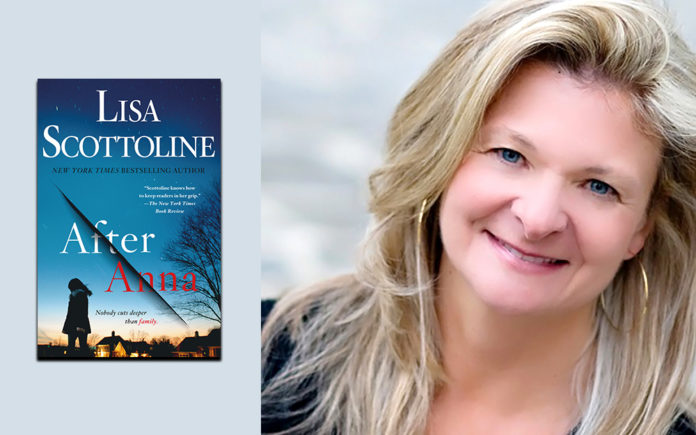 —–
After Anna
by Lisa Scottoline – Fiction
—–

There is an undeniable double standard when it comes to assessing the moral behavior of women.  Being a “good mother” is an especially challenging role and when moms fail to protect and nurture their offspring society judges them harshly.

After Anna by Lisa Scottoline (St. Martin’s Press, 390 pages) tells how far one mother will go to save her young even if she has been declared “unfit.”

The story begins on the last day of a murder trial as the jury returns with a verdict.  The accused is widower Noah Alderman, a beloved medical doctor who had a thriving pediatric allergy practice, a young son Caleb, and a fantastic new wife Maggie.  A nearly perfect life — until Anna.

Anna is Maggie’s only child from her first marriage.  Maggie lost custody of her infant daughter after succumbing to postpartum psychosis.  Although Maggie had terrible thoughts as a new mother, she never harmed her baby and sought treatment.  Anna’s father was never home — he was building his career and having affairs.   He quickly divorced Maggie, launched a successful tech company and gained full custody.

Maggie never saw Anna again until one day, the 17-year-old Anna, called Maggie asking to come home from her Eastern boarding school.  Anna’s father and his new family had been killed in a plane crash—and Anna is now worth a fortune—set to inherit $50 million when she turns 18.

Ecstatic that her daughter reached out, Maggie can hardly wait to be Anna’s mother again.  Maggie, Noah, and Caleb quickly embrace Anna as family and make her feel at home.  But Anna has a problem with family life.  She buys expensive things and disregards her new family and their rules.

Maggie is soon torn between her loving husband and teenage daughter.  But, something between Noah and Anna is not right.  She is trying to be a good mom and wife, but there is tension and Maggie is forced to take sides.  Anna quickly makes accusations against her stepfather and within two weeks of her return, Anna is murdered.

Devastated, Maggie cannot believe that Noah could kill her daughter.  After the funeral and trial, Maggie gets stunning information that changes everything.  When she tells authorities that Anna may still be alive, they don’t believe her, so Maggie must find the truth for herself.

Driven by her mother instincts, Maggie redeems herself as she goes after a human trafficking ring to free young women held as sex slaves hoping that maybe her daughter Anna is alive!

Author Scottoline is a former attorney and is known for her twisty legal thrillers.  This is her 30th book!  Scottoline recently talked at the Palm Springs Speaks series charming the audience and giving away her new book After Anna to all who attended.

With short chapters, Scottoline drops the reader into the middle of the high drama.  Beginning with the end of a trial and moving backwards in time creates an unexpected narrative.

The book picks up speed at midpoint, and in the last hundred pages takes unexpected twists and turns that are shocking and serious.

If you like attending trials and being on a jury, Scottoline puts you right in the courtroom, which is fascinating as the characters we’ve come to know respond to questions that are not easily answered with a yes or no.

The narrative is an omnipresent voice, so we get to hear what’s going on in everyone’s head, so the reader is personally involved as the chapters move out of the courtroom and back into the ten days when Anna was part of their lives.

This structure requires extra attention dear reader.  Would this book be more involving if it was told in a linear timeline?  Probably not.  Does it warrant a second read?  Maybe, if you have the time, but it’s not necessary.

I was emotionally engaged as I got caught up with the possibility of injustice and how easily people are wrongfully convicted.  Scottoline addresses the issue of “confirmation bias” where law enforcement has a suspect and seek facts that support their conclusion rather than looking elsewhere.

The final chapters are action-packed and deal with the intense and growing problem of human trafficking.

People are reluctant to believe or accept that young women and men from good families — and troubled –are taken everyday and sold as sex slaves in this country.

Traffickers prey on the vulnerable.  I wanted this part of the story to be more relevant than merely a simple solution to solving the larger mystery.  Scottoline barely scratches the surface of how traffickers recruit victims and how widespread the problem is.

There is an authenticity to Maggie’s dilemma of having to believe either her daughter or husband – a dreadful situation.  I liked that Maggie stepped up to become a mother with a mission.

Until there is equality and mutual respect between the sexes, there will always be a double standard.