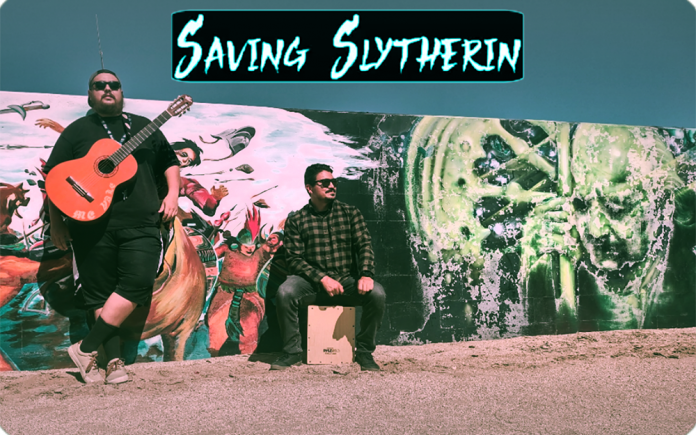 New additions to the Coachella Valley music scene are always on the rise, and one act is sure to make a name for themselves as they progress with killer rhythms and melodic sensibilities that make for an afternoon of easy listening under the sway of desert palm trees.

Saving Slytherin is comprised of Noel Oliva, who is the vocalist and guitar player, and Ricky Valadez, who plays drums. The members of this dynamic duo are the original founders of Saving Slytherin.

Akin to John Mayer meets Red Hot Chili Peppers, their sound is reminiscent of indie soundscapes, although Oliva describes it as difficult to pinpoint an exact genre for Saving Slytherin.

“I named myself Saving Slytherin as an alias for my music, but I also consider it a band name. Everyone that has contributed to the songs and videos is considered part of the Saving Slytherin family,” said Oliva.

Oliva regards himself to be a big Harry Potter fan, and got inspiration for the band name from the Slytherin house mentioned in the books and movies. He considers his main musical influences to be Metallica and the Beatles.

Saving Slytherin was formed only just last year, and have already made an impact in the local music scene, although Oliva has been playing music all his life. The group has garnered over a thousand cumulative views on their YouTube channel, with official music videos for “Drink Some Water,” “Palm Trees,” “1901,” and “Dank Red Shoes” viewable online.

Saving Slytherin will also be performing on KESQ News Channel 3 on May 19, airing on the 20th.

“We are pretty excited to be performing on television. I have not performed live yet because I wanted to write a good amount of songs and save them to my YouTube page first. I just play whatever sounds good and record it with the hope that everyone also enjoys it,” stated Oliva.

“We look forward to performing live and hopefully getting signed to a music label. I’d like to thank anyone who has taken the time to listen to our music,” said Oliva.

Saving Slytherin will be scheduling live performances after their unplugged session is uploaded to YouTube. Regarding advice that the band would give to other musicians who are just starting to dip their toes into the pool of music performance, Oliva advises not to second-guess yourself.

“If you have a phone, you have a studio. Record, upload, don’t look back,” advised Oliva.