With two music festival seasons cancelled, the 14 months of the desert’s Covid Ab-normal seemed even more agonizing for those of us who live and breathe live music.  Contention and misinformation plagued us as much as the virus itself, making the absence of the one thing that brings people together more than any other medium, felt deep and wide. With 1,883,688* vaccine doses administered to residents here in Riverside County, and things on the cusp of returning to a small amount of normalcy, the timing seemed right for an outdoor venue to bring the music to us. The 29 Palms Band of Mission Indians stepped up to the plate, and within 8 weeks of signing the contract, knocked it out of the park with mega country artist, Toby Keith, and his charismatic, opening artist, Jimmie Allen.

I consider myself a concert veteran, so please keep that in mind when I say that Spotlight 29’s Coachella Crossroads has a definitive vibe. From the moment I entered through the ticket gate, all the way to my post-concert meal at Taproom 29, the staff was notably and genuinely warm and welcoming from beginning to end. There was a “chill-factor” about them, considering this was a first for them, that lasted even after a long day of hard work and a lot of running. It was unexpected and set a peaceful tone for me in a way few large concerts have in the past. I felt safe and welcome. Inside the Coachella Crossroads venue, transformed from soccer fields to a 12,000-capacity music arena in 72 hours, people mingled with ample open space. Best Beverage, the same experts who manage food and beverage for Coachella and Stagecoach festivals, set up a perimeter that was charmingly reminiscent of festivals past. All employees and staff wore masks, as did many of the concert goers. 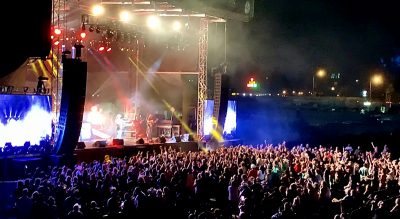 Having arrived early to catch sound check, I witnessed a large team of Riverside County Sheriffs sweeping through the arena. During the event, while Spotlight 29 security were there in numbers as well, all remained very low key, watching over us through the night. Early on, while standing in line at one of the merchandise tables, I had beer splattered over me as one very tall attendee hurled a beer at a woman who had been in line in front of him and took longer to make her purchases than he liked. His demeaner led me to believe that he had come through the gate already intoxicated. An altercation would have taken place had the overly cocktailed attendee not been stealthily escorted away, sans further drama. That was the only unhappy, agro-drunk person I witnessed at this event. Otherwise, while many were clearly enjoying the libations, I observed a sea of camaraderie, hugs, high-fives and happiness. 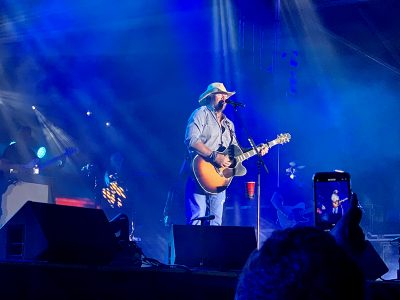 Jimmie Allen was not an artist I was familiar with prior to the show, but whom I will never forget. Allen would have won the audience on charisma alone, but owned them with his flawless and agile, honey-butter vocals and a band that packed full rock and roll power without abandoning finessed, traditional country technique. Allen shared his gratitude to be playing with Toby Keith for their first show post-Covid. “My first ever concert I ever played as a signed artist was in Pennsylvania, opening for Toby Keith, man. So it’s super cool that we get to play our first, big, post, pandemic show with Mr. Toby Keith.” As Allen sang his song, “Underdog,” an anthem to the, ”…can’t catch a breakers, the ash tray changers, the I’m gonna make it one dayers, the Hail Mary chance takers,” he disappeared off stage momentarily, only to find his way into the crowd. The audience was thrilled. Nearing the end of the song, he stood on a chair and spoke to the crowd as the band played on. He introduced each member of his band, and then proceeded to thank every schoolteacher in attendance.  He shared that his father was a marine and thanked everyone in the audience who served in the military. He made his way back through the frenzied crowd to the stage and closed out his portion of the show by taking the shirt off his back and tossing it into the crowd. Every bit of it was inspirational. 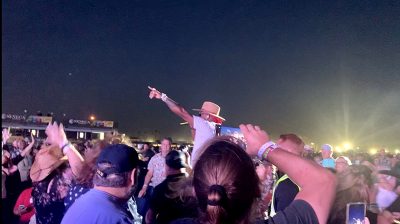 Toby Keith, backed by a dancing horn section, a beautiful backing vocalist, a weeping, soulful pedal steel, big guitars, chest rattling rhythm section, and a Hammond organ/keyboard-smith, played just about everything in his giant repertoire of hits along with some newer and deeper cuts. As expected, his song, “Red Solo Cup,” a cut he said his label told him would never be a hit, was met with a loud sing-along and the raising of hundreds of red, Coachella Crossroads branded, red solo cups (received when one ordered a selection from Taproom 29’s new house brewed offerings). Special audio and visuals prepared for the show, that were to include excerpts from Willie Nelson and friends, were nixed due to the high winds and safety concerns that did not allow the big screen to be hoisted. That seemed to be the only thing our blustery desert wind advisory took out.  Keith held the audience without big stage effects; unless you count the smoke machines that worked overtime as he sang, “I’ll Never Smoke Weed with Willie Again.” The song inspired smoke from the audience as well.

It sounded like a city-wide sing-along, as Keith abandoned his mic on “Should Have Been a Cowboy.” The entire arena sang the song, verse and chorus, for him. It was clear the crowd was full of long-time, loyal fans. But perhaps, the most impactful, was his encore (yes, the crowd begged and were given an encore). Displaying his signature love and support for our troops and country, in a voice tempered with a seriousness that deeply contrasted the jovial “Red Solo Cup”, he told the audience, “Don’t ever be ashamed of being patriotic.” The crowd responded with their cheers. His final songs were, “American Soldier” and “Courtesy of the Red, White and Blue (The Angry American).” While Keith has been controversial in the press at times, this performance was without agenda. It was simply a chance for a grateful artist to perform his deep arsenal of songs, and for his fans to enjoy them.

Sources say that this will not be the last big name, country concert at the new Coachella Crossroads venue. Plans for a semi-permanent/permanent staging structure are underway. I for one, will look forward to any event the 29 Palms Band of Mission Indians team produce.