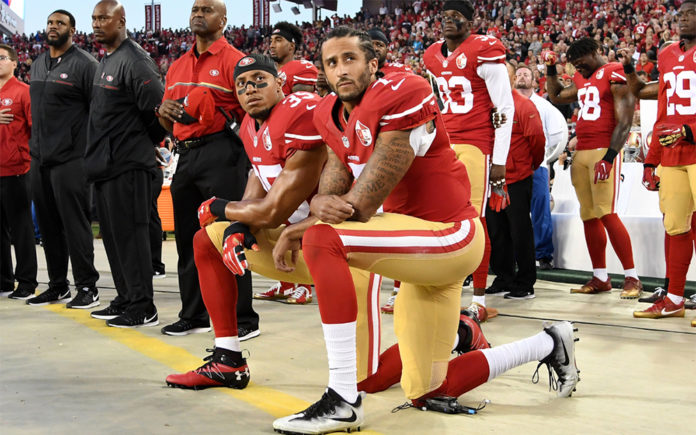 Think you’ve had a tough week?

I think not, when compared to Roger Goodell.
It is a testament to the battered but enduring popularity of the NFL that America’s biggest sports machine somehow seems to roll on like a boulder on a slight incline despite a public relations mess bigger than concussions or the Ray Rice video. The league rolls on despite half of the country thinking its players are unpatriotic ingrates, and despite a Commissioner Who Couldn’t Shoot Straight seeming hapless and helpless to make anything better.

Earlier this week Goodell announced a feckless new policy regarding players protesting by sitting or kneeling during the national anthem. It states that players on the field must stand or their teams will be fined, and that those who don’t want to stand must stay in the lockerroom during the anthem, their freedom of expression hidden from view.

Things have gotten worse since. If Goodell’s new policy was supposed to be the compromise that brokered peace and satisfied everybody at least a little bit, it has crashed like the Hindenburg. Somewhere, Colin Kaepernick, founder of the protests aimed at shining light on social injustice and racial inequality, must be smiling. Because this new policy has served the opposite of its purpose, all but guaranteeing anthem protests will be a major NFL storyline for a third straight season.

The negative fallout has been a torrent.

First, the league’s claim of unanimous owners support for the new policy was grossly misleading. It has come out no formal vote was taken. At least two owners (Raiders, 49ers) abstained from the informal vote. One owner (Jets) already has sad his club will have no “fines, rules or restraints” against players who wish to protest on the field. Other owners including the Dolphins’ Stephen Ross have publicly supported players’ right to protest. So Goodell’s indication of strong owner consensus for the new policy seems a flat lie.

Goodell also erred to not involve the NFL Players Association in forming the new policy, when to have done so may have helped prevent the tone-deaf effect of telling protesters (most of whom are African American) to go hide in another room and not be seen.

NFLPA executive director DeMaurice Smith accuses the NFL of trying to “squash” players’ freedom of speech, and one can envision this escalating into a court case that challenges the ability of leagues and teams to infringe on basic rights in this manner.

The new policy also is vague in demanding players on the field “shall stand and show respect for the flag and the anthem.” What if a player stands but with head bowed? Or doesn’t face the flag? Does the NFL wish to be the police state that demands all players stand at attention with hands over hearts?

All of this, of course, has been against the backdrop of President Donald Trump, Divider In Chief, doing what he does.

It was Trump who last fall inflamed the situation by calling any player who kneels during the anthem a “son of a bitch.”

Perhaps it should be no surprise that a president seemingly bent on eroding American institutions (a free press, his own FBI) might be comfortable suggesting as an aside that not standing for the anthem might warrant deportation.

It reminds me of those “Love It Or Leave It” bumper stickers against Vietnam War protesters in the late ’60s. It reminds me of the conservative broadcaster whose recent reaction to LeBron James’ outspoken political views was to tell him to “shut up and dribble.”

Seahawks receiver Doug Baldwin noted the irony of as U.S. president “contradicting [the freedom] our country is really built on.”

As a nod to the good intent of the anthem protests the NFL has committed almost $90 million to social and racial causes. That and raised awareness means the protests spawned in 2016 by Kaepernick have succeeded, though at palpable cost to the league. But if that monetary outlay was a genuine goodwill effort by the NFL, the new policy curtailing protests is the opposite.

By trying to make the kneeling protesters go away, shunted out of view, Roger Goodell has assured that the players and their cause will remain out front as a talking point concurrent with the coming season.

That isn’t good for the football, but it is good for things more important than football.