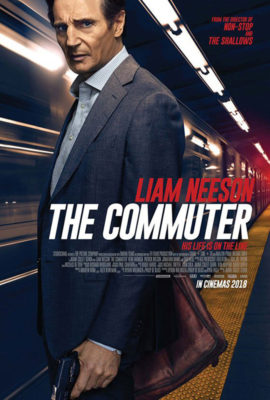 We meet insurance agent Michael (Liam Neeson) on his regular commute home, which — after being contacted by a mysterious stranger — suddenly becomes anything but normal.  New circumstances force Michael is to uncover the identity of an unknown passenger on the train before the last stop.  As he works against a ticking clock and speeding train to solve the puzzle, it slowly dawns on him that a dangerous plan is unfolding!  Michael quickly realizes he’s unwilling pawn trapped in a criminal conspiracy that hangs like a guillotine blade over everyone on the train – including himself.

This reasonably diverting Liam Neeson action thriller plays with all the tropes – think: “Taken” on a Train — of the genre as well as the actor’s trademark, calm and deliberate, deadly skills of the star.   Director Jaume Collet -Serra squeezes everything he can out of the workman-like screenplay from Byron Willinger, Phil de Blasi and Ryan Engle. See if you can identify the hidden villain before Michael.  It’s not that hard.  Fun and satisfying in spite of its B-movie provenance.

New for the Home Theater: 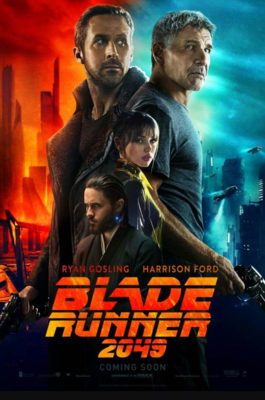 Some reputable critic called this latest cinematic iteration based on elements of Philip K. Dick’s iconic story “Do Androids Dream Electric Sheep?” and Ridley Scott’s three -decades-old film adaptation the “best movie of the year.”  That accolade is not shared by many serious movie buffs – not just sci-fi fans.

What made Scott’s 1979 movie – specifically the final cut – so remarkable and timeless and universally praised is that it created a new mythology that explored the fundamental question of what it means to have a human experience.  I missed the continued examination and dramatization of that central question in director Denis Villeneuve’s visually rich update.

Basically a sci-fi thriller, the new blade runner has LAPD Officer K (Ryan Gosling) discovering a long forgotten secret that could plunge the remnants of mid-2st century society into chaos.   K’s quest to find answers leads him to original blade runner Rick Deckard (Harrison Ford) who has been missing for 30 years.

If the blade runner world, movies and mythos is of special interest, this new state-of-the art transfer is loaded with a bounty of nicely crafted, relevant, fascinating and informative featurettes, including: “Designing the World of Blade Runner 2049,” “To Be Human – Casting Blade Runner 2049,” “Prologue 2036: – Nexus Dawn,” “Prologues 2048 – Nowhere to Run,” “Prologues 2022 – Black Out,” “Blade Runner 101 – Blade Runners, The Replicant Revolution, The Rise of Wallace Corp, Welcome to 2049, Joi and Within the Skies.”)  This film is intended as a stand-alone title that does not require having seen the original, although it certainly helps.  However, if you are new to the dystopian future looming on our LA horizon, the bonus material is as thorough refresher on the issues that matter most in Dick’s dark vision (both on the page and screen).  I can’t think of a more appropriate movie to experience on ULTRA HD 4K + 3D.  What perfect match of home video technology and subject matter!  Is there anything that can be imagined Warner Bros. Home Entertainment.