After such a challenging 2016, what better way to welcome and celebrate a new year than with an international film festival!

This year welcomes a new PSIFF Artistic Director, Michael Lerman.  In his welcome letter, he says: “What I’m most proud of is that in these tumultuous and divisive times, both in the US and abroad, this eclectic group of works from all over the world will join us together in a 10-day celebration of diverse voices in storytelling.”

For a full two weeks, beginning January 2 thru January 16, PSIFF will show 473 screenings of 192 films from 72 countries, which include 58 premieres – nine world, five international, 20 North American and 24 from the United States.  Forty-two films are Foreign Language Oscar© submissions.

Opening Night is Thursday, January 5, at the newly refurbished Richards Center for the Arts at Palm Springs High School.  The feature film screening is the world premiere of The Sense of an Ending directed by Ritesh Batra and staring Jim Broadbent and Charlotte Rampling.  The Opening Night party follows at the Palm Springs Art Museum.

For movie buffs, Talking Pictures provides an opportunity to hear filmmakers share insights about the process of making their film.  A Q&A allows the audience to engage with the creative talent.  Viggo Mortensen talked about his film Captain Fantastic Tuesday. More often than not, attending filmmakers show up to their screenings, so check the schedule for details.

For more great industry talk, be sure to attend Eyes on the Prize: Foreign Language Oscar Directors in Discussion.  This program is moderated by The Hollywood Reporter’s Scott Feinberg — January 9, 7:30 – 9:00pm at the Mary Pickford Theatre.

Every year, PSIFF shines a light on a country generating artistic and provocative films.   Focus on Poland offers five new works by contemporary Polish filmmakers evoking a specific time and place in the country’s history and changing culture.  This program will honor filmmaker Andrzej Wajda with a screening of his final work Afterimage and his 1958 masterpiece Ashes and Diamonds.

One of the most exciting film events is the New Voices/New Visions.  This program includes ten films as part of a competitive showcase from emerging international directors.  These films are judged by a jury of festival programmers and U.S. distributors.  This year, some of these narrative films come from Saudi Arabia, Latvia, Kenya and Nepal.

A selection of ten films from countries that include South Korea, Israel and the Czech Republic are part of the Modern Masters program.  This selection features narrative films from international directors who set the standards for contemporary cinema.

Everyone loves True Stories.  This collection is the best of international documentaries.  This year the selection focuses on the arts.  They include music, dance, fashion and Hollywood.  One documentary is Jewel’s Catch One (U.S.), directed by C. Fitz about the popular LA nightclub that embraced all races and sexual orientations — screening January 7, 8 & 10.

Back by popular demand and a consistent festival favorite is the After Dark program, which includes films that journey into the darker and mysterious side of life.  Look for the UK’s Oscar© entry in Under the Shadow, as well as films featuring Guy Pearce, Dakota Fanning and Glenn Close.

How about Dinner & a Movie?   The 1985 classic Tampopo (Japan), directed by Juzo Itami screens January 9 at 5:00 pm followed by dinner at restaurant Pho 533 in Palm Springs.  Insatiable: The Homaro Cantu Story shows January 11 at 5:30 pm with dinner after at Palm Springs 849 Restaurant and Lounge.   Special menus have been created that are inspired by the film providing a unique dining experience.

Being so close to Hollywood, the industry trade publication Variety has it’s own program: 10 Directors to Watch.  Films include Aquarius (Brazil/France), directed by Kleber Mendonça Filho and The Eagle Huntress (UK/Mongolia/U.S.), directed by Otto Bell. 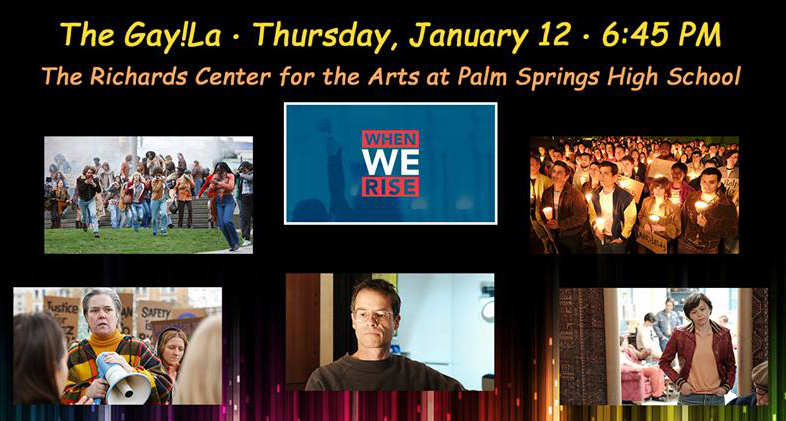 The festival’s Gay!La screening will be the North American Premiere of ABC’s When We Rise directed by Gus Van Sant and written by Dustin Lance Black, the same team who made the award winning film Milk.

Other special presentations include four standout films: The World Premiere of Breakable You (U.S.), the U.S. Premiere of King of the Dancehall (U.S./Jamaica) directed by Nick Cannon, the North American Premiere of The Hippopotamus and Old Money (Austria) directed by David Schalko and starring Coachella Valley resident and global celebrity Udo Kier.

The Power of Words: Books to Screen started with the PSIFF in 2015 and has been a favorite from the get go.  The two-day event requires a special pass and features a day of films and a day of panel discussions with authors, screenwriters, producers and industry professionals.

The film fun just keeps going with Parties!  Some parties pop up spontaneously around town, but scheduled parties require tickets to attend, so check with the box office or online for availability.

Every year the French Party! They love to celebrate the wonderful French-language films and filmmakers —  January 6, 9:30 pm at the Ace Hotel & Swim Club.

PSIFF is known for screening Foreign Language Oscar© submissions so it’s apropos to celebrate with an Awards Buzz Party — January 7, 9:30 pm to 11:30 pm at the Hilton.

Closing Night screens The Comedian, direct by Taylor Hackford and starring Robert De Niro, with an after party at the Renaissance Hotel.

Part of the Film Society’s mission includes an educational component, which includes Student Screening Day where students from around the CV are invited to a screening of two films, lunch and a live Q&A with the filmmakers.  This is an inspired event that valley kids love and never forget.

The PSIFF is a wonderful opportunity to engage with the community and fellow film lovers.  An estimated 135,000 people will attend the festival from all over the world.