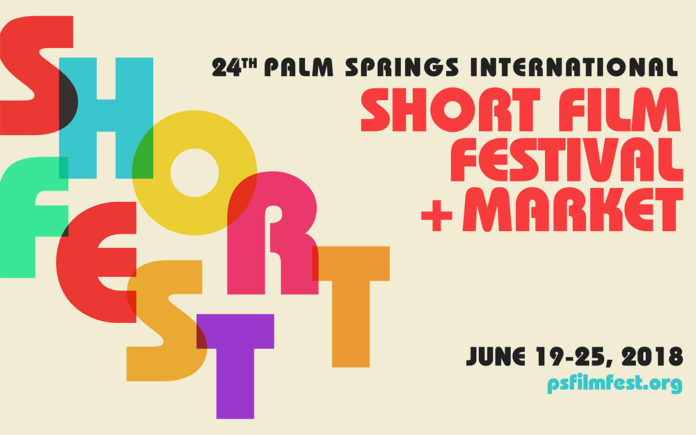 Palm Springs International ShortFest will showcase 333 films including 42 World Premieres, 32 International Premieres, 42 North American Premieres and 13 U.S. Premieres with films coming from 62 countries around the world.  There are 55 curated programs, which will screen June 19-25, at the Palm Springs Cultural Center in Palm Springs.  More than 5,300 of the 5,400 festival submissions will be available in the Film Market for industry attendees to view.  The complete line-up is available at www.psfilmfest.org.

“We’re thrilled to be sharing this year’s lineup,” said ShortFest Festival Director Lili Rodriguez.  “With an increase in submission numbers, we knew we’d have our work cut out for us, but the programming team has narrowed down the selection to a wonderful collection that includes some of this year’s festival favorites as well as amazing new discoveries. We were so impressed by the quality of these stories and we can’t wait to pack into theatres and share them with our audience this summer.”

ShortFest jurors include Penelope Bartlett (Programmer for the Criterion Collection), Marc-André Grondin (Actor), Brian Hu (Artistic Director of Pacific Arts Movement, Presenter of the San Diego Asian Film Festival, Assistant Professor of TV, Film, and New Media at San Diego State University), Missy Laney (Director of Development at Adult Swim) and Ina Pira (Curator at Vimeo).  Over $87,500 in prizes, including $27,000 in cash awards, will be given out in 21 categories to this year’s short films in competition.  First place winners in five categories will automatically become eligible for consideration by the Academy of Motion Picture Arts and Sciences (AMPAS®) for a possible Academy Award® nomination.  Over the course of 23 years, the Festival has presented 101 films that have gone on to receive Academy Award® nominations.  Winners will be announced at a brunch on Sunday, June 24.

Indie to studio and everything in between! This “reverse” roundtable will have creative executives, producers and on-set gurus answering your questions about all things production from acquiring crew to webisode production.

We know you have another idea or script you’re ready to pitch – feature, episodic, VR or short form, all are welcome! Our industry guests will show you the ropes to a successful pitch, and share stories on the do’s and don’ts. They will share some insight and then break in to groups to workshop some of your pitches.

The industry is a business – but it is a business full of creation and collaboration. From the time a project is greenlit in your head or in a creative executive’s office, the planning begins. One of the most important aspects of planning is budget and management – the business. Making every dollar count on a production is an art in itself! It pays to know how to move dollars around to make the most of your total budget, human capital included. Producers and filmmakers share inside knowledge and tricks of the trade to get your budget to “that’s a wrap.”

We’ll take a quick tour to major festivals around the world! Our global festival programmers will give an international bird’s eye view of opportunities abroad to showcase your film. Considering major festivals outside the US will open your films to new audiences and gives a fresh take on the festival circuit. Audiences around the world will be glad you attended this panel!

There are new festivals and opportunities for your short film around every year! Why should you pick a certain festival, platform or journalist to bring your film to? Find out at this “reverse” roundtable, where programmers and industry will pitch you their best opportunities.

We know you have another idea or script you’re ready to pitch – feature, episodic, VR or short form, all are welcome! Our industry guests will show you the ropes to a successful pitch, and share stories on the do’s and don’ts. They will share some insight and then break in to groups to workshop some of your pitches.

It’s time to test out those pro pitching skills! Our diverse group of industry professionals – agents, studio executives, financiers, producers and filmmakers – are ready to meet with you one-on-one. You pitch. They respond.

3:30PM – Panel: The Release Relief: Releasing Your Film to the Audience – 60 minutes

There are more opportunities than ever to release a film to your audience. Festivals, theaters, streaming, and distribution each offer options for more people to put eyeballs on your film. Learning the ropes with your most recent short film will be valuable when strategizing for your future projects. What choices and opportunities might present themselves and where? How can filmmakers best capitalize on these? Planning for the release of your film is imperative for the best return on these opportunities. Our panelists will discuss steps for releasing your film from planning to distribution!

Your network is not only who you know but who knows your network. Chances to build a network can sometimes be elusive – we take the guesswork out of it! Build a new network at ShortFest forum. Whether it’s approaching actors to read your new script or attracting coverage of your current short film, let our industry guests tell you how to best network when meeting someone new!

It’s time to test out those pro pitching skills! Our diverse group of industry professionals – agents, studio executives, financiers, producers and filmmakers – are ready to meet with you one-on-one. You pitch. They respond.

Let’s take a quick trip to top festivals and meet their programmers. Our panelists will provide candid insights into the programming process, deciding which festivals are best for your project, and making sure you make the most of your festival experience.

Designated by AMPAS, BAFTA and BIFA as an award-qualifying festival, and accredited by the International Short Film Conference, the Palm Springs International ShortFest & Short Film Market, one of the most acclaimed short film showcases in the world, will take place in Palm Springs on June 19-25.  Now in its 24th year, ShortFest will showcase 333 short films from 62 countries. The concurrent Short Film Market, the only one in North America, will feature a library of more than 5,400 films available to film buyers, industry and press.  The ShortFest Forum programs are a four-day schedule of seminars, panel discussions, roundtables and master classes staged free of charge for attending filmmakers.