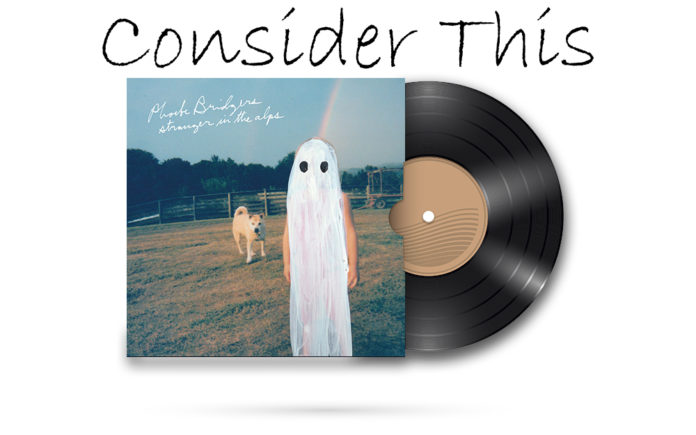 The power and the beauty of music is that sometimes it just allows us to feel our feelings; almost giving us permission to run the emotional gauntlet from elation to sorrow.

There are certain songs, like the Roches’ “Hammond Song,” Tracy Chapman’s “Fast Car” and Dar Williams’ “When I Was A Boy” that evoke such personal “me too” (in a non # “hash-taggy” sexual assault way), reactions. The same can be said for Phoebe Bridgers’ “Smoke Signals” song.

Phoebe is an L.A. native, born in 1994, she grew up in Pasadena. She became passionate about music at an early age.  Although she didn’t respond well to piano lessons as a kid, she began playing guitar at age 13. Her house was full of Classic Rock, Country and Bluegrass music records, so it isn’t surprising that the first song she mastered on guitar was Hank Williams Sr.’s “Lovesick Blues.”

By her senior year of high school she began playing solo shows around town. Through a mutual friend, she was introduced to Ryan Adams. The prolific alt.country/Americana Rocker was so taken with her music that he brought her into his studio the day after he saw her perform. She recorded three songs in just a few hours. The resultant Killer EP was released through Ryan’s own Pax Am label.

The EP created enough buzz that Phoebe began opening for artists she admired, including Julien Baker, the Violent Femmes and her personal hero, Conor Oberst. Pretty soon she was in the studio recording her first full-length album, Stranger In The Alps with veteran producer and A&R guru Tony Berg.

The record opens with the aforementioned “Smoke Signals” the instrumentation laps gently, a wash of thrumming Bass, UFO synths, brushed percussion and liquid acoustic arpeggios. Phoebe’s vocals are hushed and intimate. A sharp recollection of a road trip with her dad, the language is pithy and succinct; “I went with you up to the place you grew up, and we spent a week in the cold/Just long enough to Walden it with you, any longer it would’ve got old.”

Her melancholy mien is underscored by reverb-drenched baritone guitar filtered through an Echorec pedal. Pivoting between angst and ennui she name checks the recent deaths of David Bowie and Lemmy from Motorhead. Back in L.A., she plays it cool, but sweeping strings articulate a level of yearning that feels palpable. It persists as she offers this epiphany; “the future’s unwritten, the past is a corridor.”

Meditations on youth and mortality are the juxtaposing leitmotifs of this album. Occasionally, on songs like “Funeral” and “Chelsea,” Those themes intertwine. The former opens with squally guitar that sparks and pinwheels over feathery acoustic filigrees and lowing cello. Here, Phoebe attempts push past her own self-absorption, and reflect on the death of a kid her own age. “Jesus Christ, I’m so blue all the time, that’s Just how I feel, always have always will.” But then she checks herself; “I woke up in my childhood bed, wishing I was someone else, feeling sorry for myself/When I remembered someone’s kid is dead.”

The latter dismantles the romantic myth that surrounds Punk Rock’s first fun couple, Sid & Nancy. She stealthily re-imagines their final days at the Chelsea Hotel nearly 40 years ago. Descending guitar chords dovetail with downturned piano notes, mimicking the torpor of intravenous addiction. Clickity-clack percussion accompanies this flash of insight in the first-person; “And for generations they’ll romance us, make us more or less than ever was before the Chelsea and the floor/Make us stand before the masses like two speakers for the poor, when there was no revolution, nothing we were fighting for.”
The most winning songs here chart her relationship with her ex-boyfriend. “Killer” is a spare and evocative piano ballad that veers into dirge territory every now and again. The lyrics acknowledge that their romance has hit a brick wall; “I’m sick of the chase, but I’m stupid in love, and there’s nothing I can do.”

“Scott Street” is a one-sided conversation that cloaks emotion in indifference. Strummy acoustic guitar gets the ball rolling, as squeaky cello and guitar feedback thread through a chunky backbeat. Glib couplets like “Walking Scott Street feeling like a stranger, with an open heart, open container/I’ve got a stack of mail and a tall can, it’s a shower beer it’s a payment plan,” ensure she maintains a safe distance.  By turns diffident and defiant, she stands her ground in this romantic detente. At one point she asks “Do you feel ashamed when you hear my name?” As the track clatters to a close, train whistles and bicycle bells add to the emotional cacophony.

“Motion Sickness” is the break-out hit here. The winsome melody is anchored by a propulsive rhythm, growling guitars and rumbling bass lines. The tune is catchy as hell, recalling of “Rumours”-era Fleetwood Mac. Even as she as she throws her ex’s patronizing words back in his face; “You said when you met me you were bored and you were in a band when I was born,” she cuts to the quick on the chorus. “I have emotional motion sickness, somebody roll the windows down.”

Other interesting tracks include “Georgia,” a gossamer gloss in ¾ time that builds to an urgent crescendo. “Demi Moore” finds our heroine stoned and alone on the other end of a long distance, slightly salacious phone conversation. On the jangly “Would You Rather” she gets to trade verses with her Indie icon, Conor Oberst.  Rippling guitar riffs connect with harpsichord-y keys and plunky piano. As their vocals intertwine on the bridge, the string section echoes and sways giving the impression that something perfect is just out of reach.

After nine sublime originals, the album closes with a bold cover of Mark Kozelek’s “You Missed My Heart.” Redefining the term prolific, Mark has been a force of nature since beginning his career in the late ‘80s. Fronting his first band, Red House Painters they recorded six transcendent and influential albums. At the turn of the 21st century, he founded Sun Kil Moon and released nine albums. In between he’s somehow found time to write and record nine solo LPs, three EPs and 16 live efforts.

“You Missed My Heart” is at once harrowing and heartbreaking. A brutal monologue from an obsessed sociopath who breaks into His ex-girlfriend’s house, murders her new boyfriend and then her. Grim in its specificity, it almost manages to sway the listener to the killer’s side.

In Phoebe’s hands, the song feels even more haunted and desperate. Her sweet, almost sing-song vocals crest over dolorous piano chords as she unspools grisly saga; “Looking out the window up at the blue sky/ Listening to her scream listening to her cry, a feeling of relief came over my soul, I couldn’t take it any longer and I lost control.” It’s a testament to her talent that her version elicits reactions of terror and empathy.

Perhaps as a musical anodyne to that bleak tableau, the record formerly closes with “Smoke Signals (Reprise).” This brief piano interlude allows the listener a moment to Exhale and reflect on this amazing debut.

These days, most millennials are busy curating their every move on Instagram, binge-watching “Fuller House” and ingesting detergent pods, “just to see what happens.”  Phoebe Bridgers might also indulge in that same ephemeral behavior, but she’s also taken time to fold thoughts and feelings, insecurities and moments of self-possession into memorable melodies. Her music manages to feel wildly specific, yet surprisingly universal. It will make you smile with recognition, and then break your heart.