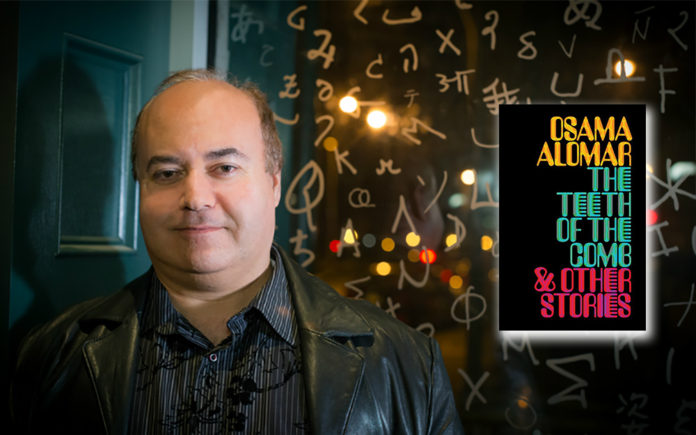 Casualties of the Syrian Civil War are estimated at 450,000. As if there is anything “casual” about death, loss and destruction of people, especially when they are cut from the same cloth.

The Syrian clash began in 2011 and there appears to be no resolution in sight. How do Americans get insight into the lives of Syrians beyond the evening news? In Osama Alomar’s The Teeth of the Comb & Other Stories (New Directions, 104 pages) a collection of narratives reveal a beautiful culture torn and battered by conflict.

Author Alomar is imaginative, bold and the descriptive language is powerful. His fables are filled with allegory and metaphor. Sometimes only a sentence or just a few pages, each serves as a kind of meditation.

The story “Ants” is a favorite: “When I crushed a large number of ants by accident with my feet, I realized that weakness is punishment without wrongdoing.” That is the entire story.

Another short, short story is “A Handkerchief of Freedom.” “The dictator sneezed. He pulled Freedom from his pants pocket and blew his nose. Then he threw her away in the wastebasket.”

“The Price of Perfume” tells the tale of an 8-year-old boy who is deceived by an elder whom he was raised to respect. After he inhales a fabulous fragrance, the wise man becomes a wolf that devours his innocence. “He fell under the burden of words smeared with muddy threats.”

Told in first-person, “Whoever Is Happy” is about an activist who calls out for people to join him who are happy. “They looked at me with suspicion and turned their backs to me.” But when the narrator asks for those to follow him who are sad, they turn to him with enthusiasm.

The story “Never Been Touched” is about a book sitting on a shelf with battered cover and marked-up pages, who says to the book next to him, that he envies his freshness. Whereas the other book responds, sadly, that it has never been touched.

In “Fingers of Dynamite” world leaders grin big and shake hands on the evening news, but the viewer notices that their fingers are chubby explosives ready to go off.

From “Wolves and Sheep, ” comes a story where even the wolves can be tricked and devoured. “They search for prey to quiet the monsters of hunger that never grow weary of roaring night and day.”

An unborn boy asks a man to find a wife and be his father in “The Shining Idea,” but the father denies his request because the world is so bleak. “My son, life is filled with frustration and pain and tears. You should be happy that you haven’t known it.” However, the child sees life as exciting and full of pleasure. The boy moves on to hopefully convince someone else to give him an opportunity to live.

In the story, “The God of Virtues” Satan makes a Facebook page and website to draw people to him. Promoting goodness, tolerance and the brotherhood of humankind, he soon has millions of “friends” and his campaign becomes a success.

Reading the 150 plus stories in The Teeth of the Comb, I felt as if I were reading great Arabian writers from the past who shared their secrets, wisdom and the beauty of their culture through poetry and prose.

Alomar’s poetic voice seems to be crying out from the wilderness. His stories are meaningful, timeless and urgent. Reading the book as a whole evokes compassion, outrage, sorrow and perhaps some hope for the region. How can such hate continue to exist and function without destroying itself?

This is a book you can also pull off the shelf and read a section aloud – even to your self. Flipping through the collection and selecting a story at random is a delightful experience.

The author was born in Damascus, Syria in 1968 and now lives in exile here in the U.S. It’s hard to know what his intent is or what specifically is behind these allegorical stories without asking him. I do wish at times that I knew exactly what the story is really about, or what it refers to, but I’m not sure if that’s important when it’s compelling literature.

Maybe the question to ask is: If there were no civil war in Syria or such complicated conflicts in the Middle East, would The Teeth of the Comb still be provocative? The answer is a resounding, Yes.