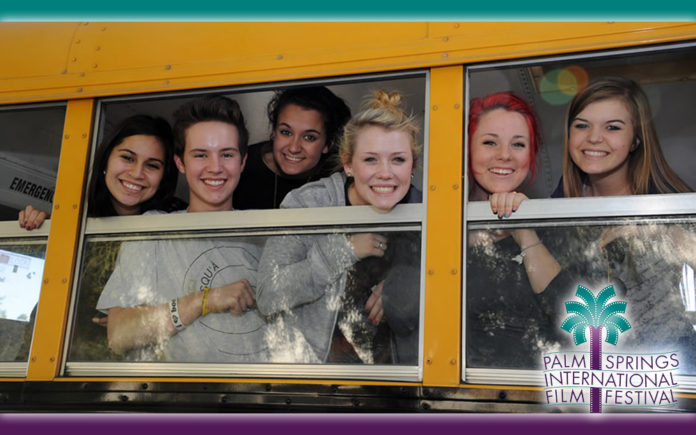 That’s what makes the PSIFF “Student Screening Day” such an important component of the festival.  And, it is the screening most anticipated by students throughout the Coachella Valley.   The event screens two films and provides lunch for 1,300 students from 10 different high schools.

Now in its 11th year, the PSIFF has expanded the program to two days holding screenings at both Palm Springs High School and Indio High School.

Student Screening Day will present films from the 29th Annual PSIFF catalogue to give CV kids the opportunity to interact after the screening and learn firsthand from the director, cast, and creators of the films.

They arrive at the auditorium at 8:30am, meet organizers and then see the first movie followed by a Q&A.  They break for lunch, catered by local favorite Aspen Mills, and then see the final film and participate in the Q&A.  It is a day full of new ideas, cultural stimulation and creative expression.

Every year, students are exposed to world cinema and a culture different than their own. The films in the student program include:

When Will Lautzenheiser’s arms and legs are amputated following a bacterial infection, his life is derailed and he turns to stand-up comedy as a therapeutic and creative outlet.

In the meantime, a world-famous medical team is performing transplants that restore bodies to unprecedented levels.

Despite grave risks, Lautzenheiser agrees to undergo an experimental double-arm transplant in the hope of reclaiming his independence.

Guests: Director Robin Berghuas and Will Lautzenheiser, subject of the documentary, will be in attendance for post screening Q&A!

An exploration of family, sacrifice, and love tells the heartwarming true story of a young Turkish soldier who takes in a stranded five-year-old discovered on the battlefields of the Korean War.

Guests: Director Can Ulkay, Producer Mustafa Uslu, Actor Kim Seoul and other cast members will be in attendance for post screening Q&A.

The Film society’s vision is to “strive for a world in which enlightenment, knowledge and tolerance prevail.”   They believe film as an art form has the power to bridge cultures and illuminate the universality of the human experience.

Coachella Valley students are provided an opportunity through film to experience the greater world and identify with those who are different.

The film society “aims for a leadership role in providing an extensive forum for multicultural exchange in the Coachella Valley and beyond.”  The Student Screening Day is the first step in achieving this mission and vision.

“Stumped” and “Ayla, The Daughter of War” are also screening for general audiences as part of the wider festival.

Be sure to check venues, dates, times and availability.  For tickets, schedules and more information go to www.psfilmfest.org or call 800-898-PALM.