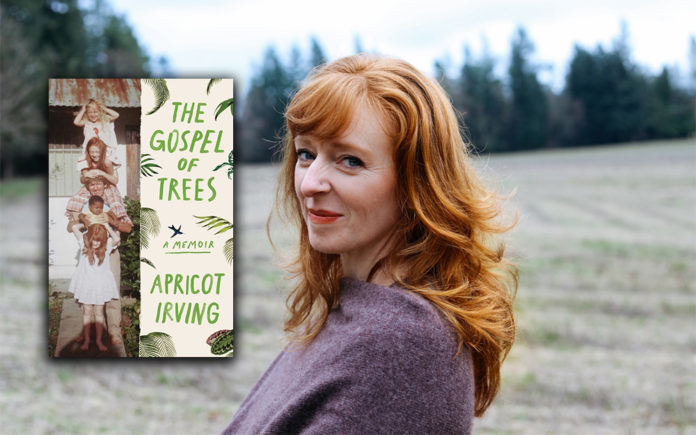 —–
The Gospel of Trees by Apricot Irving – Memoir
—–

Childhood is a strange reality.  Those who raise children determine choices and make decision that prominently shape and form them.  The Gospel of Trees by Apricot Irving (Simons & Schuster, 369 pages) is about an adult daughter coming to terms with her young life as a child of missionaries.

Irving begins her story here in the Coachella Valley.  Her father, Jon Anderson was raised on an eighty-acre date farm in Thermal.  While attending Cal Poly Pomona he fell in love with a free-spirited girl from Oregon named Flip Devine.  The two had crossed paths before college when Anderson was a forest ranger in the San Bernardino Mountains.  Both studying agriculture, they seemed destined to be together.

After marrying, the couple lived in Thermal on the family farm.  Irving was born and two siblings followed.

The family lived in a small trailer on the date ranch. For Irving’s mother, the summer heat was unbearable, her husband was always working, her small children were demanding and the chores were overwhelming.

Ready to walk away from it all and return to Oregon, she opened a book to relax and by chance it was a woman’s devotional with the words of Jesus.  It spoke to her circumstances in a meaningful way.   She decided to attend church to find out more about Jesus Christ.

As family farmers it was difficult to save enough money to build a home in the CV.  So when an opportunity arose for a paid agronomist position at a missionary outpost in Haiti, the family saw a way to earn money while serving God and their love of tending the earth.

Moving to Haiti was a culture shock, but for little Irving, it was magical.  She did not see much difference in how the Haitian’s lived compared to her own life on the farm where as a child she ran around barefoot, and had very little amenities.  So, for her, Haiti was hardly an adjustment.  It was an adventure.

But big differences became apparent with how they were told to treat the Haitians.  The Haitians were there to serve them – clean, cook and work.  If Irving wanted to ride a bike that belonged to a Haitian boy, the child was told to get off and let her ride it.  This disturbed Irving, even as a child.  She saw the injustice and unfairness.

Serving several terms as missionaries in Haiti, the family witnessed political chaos and turmoil.  At times they feared for their lives.  They saw a country coming apart and destroying its own natural resources.  But under it all, Irving saw a resiliency in the people and in the land that made it a powerful place for her.

Within author Irving’s memoir she gives the history of the island and how it came about starting with Columbus.  It was an island of freed slaves.  She brings to life the political upheaval during the 70s and 80s.  And as an adult, she returned to the island after the devastating earthquake as an adult.

At times, Irving is overly descriptive, yet she can also be poetic.  Her narrative is poignant in that she and her family were poor when they got to Haiti and were treated as if they were privileged.  However, she recognized that her family’s poverty was nothing like that of the Haitian’s.

This juxtaposition is what makes the book powerful and beautiful.  Especially coming from a child’s perspective of innocence and joy.

The Gospel of Trees also reveals a difficult relationship between father and daughter.  I really liked Irving’s father.  I wanted to know more about him and his belief system.  It is especially heartbreaking when he gives so much of himself to reforestation – the necessary start to restoring the islands natural recourses, preventing floods and decontaminating water–only to discover the necessary trees have been cut down or sold.

The demands of their “mission” nearly destroyed the family and their spirit.  Coming of age in Haiti was a challenge Irving had no control over.  She deals with the experiences of her life with honesty, and with the hindsight as an adult married with children of her own.  She uses letters and journals written by family members to get that big picture view of a child of missionaries and the impact it had on who she is today.

Childhood can feel like a strange dream.  Taking a look back to see what shaped the person you are today can be a meaningful awakening.