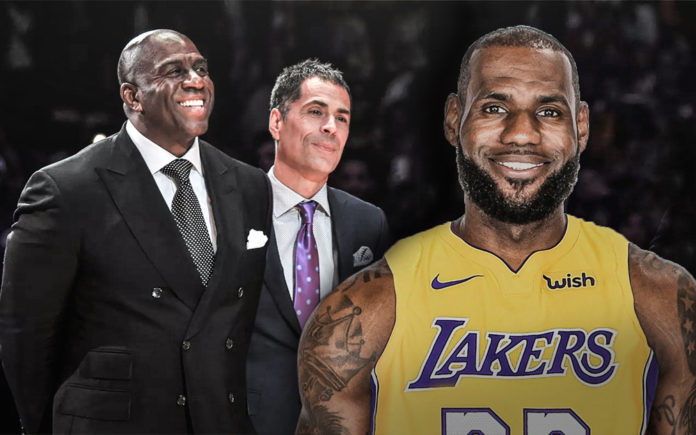 The Lakers’ offseason has been a roller coaster of emotions.. That’s what happens when LeBron James changes teams. But L.A. isn’t done making waves this summer. With Kawhi Leonard still in limbo, the Lakers still with a moderate amount of cap space, and fit questions up and down the roster, there’s still plenty to sort out over the coming weeks. Here are the five biggest questions.

LeBron has spent the past few seasons in Cleveland playing an amorphous point-forward role with a usage rate that always ranked among the league’s highest. We’ve grown accustomed to seeing him orchestrate and execute everything on offense, oftentimes in spite of the players around him. The Lakers, on the other hand, are looking to take the load off. Based on a report by ESPN on Thursday, it appears that the Lakers are planning for LeBron to migrate toward the rim on offense, not away from it, in L.A. The goal is reportedly for James to become more of a post player who finishes and facilitates, rather than a primary playmaker.

The Lakers’ goal, it appears, is to be the antithesis of Cleveland. Instead of targeting shooters, Magic Johnson is going after playmakers and defense-first veterans. It’s a sensible strategy on paper, but it also feels a little more risky than it should. After playing at a rapid pace the past two seasons under Luke Walton, the Lakers want to slow it down to a speed of LeBron’s liking. It makes sense to cater to James, just as it made sense to go faster to play to the strengths of a younger team. But the transition process could produce some growing pains, especially for the young players on this team, should they stick around. Playing slower also means efficiency will be more of a priority—fewer possessions, etc.—and some of the additions the Lakers made don’t exactly scream that. JaVale McGee can be efficient, but he’s also erratic at times. Rajon Rondo can set up others for efficient shots. And Lance Stephenson—well, there are times when his efforts work out, I suppose, but he’s not reliable by any means.

As it stands, the Lakers’ best shooters on the roster are sophomore Kuzma and rookie Moe Wagner. Lonzo’s shot will hopefully improve in Year 2, and Ingram has developed into a reliable shooter but this is a void that none of the Lakers’ other signings may be able to fill.

LeBron has improved as a 3-point threat in the back half of his career, but he’s still needed shooters around him so that he could create for himself and others. And if he becomes more of a post player in Los Angeles, he’ll need shooters to kick out to. Kyle Korver in Cleveland looks like he’ll be available. Wait a minute, haven’t we seen that movie before?

Lonzo’s place on this team was already interesting. It gets even more fascinating with the news that LeBron will spend more time in the post. The second-year player will now be in competition with Rondo for the role of primary ball handler. I’d argue that it should be Lonzo regardless, given that he is already a good passer, rebounder, and defender. But if the directive is to win now, he’s going to have an uphill battle. Rondo shot better than Lonzo from the field last season, and they each shot around 30% from 3—Rondo on only 2.3 attempts per game, Lonzo on 5.7 attempts. Lonzo brings unknown upside and a lunatic father, while Rondo is a known commodity with a lower ceiling. It’s going to be a fun competition.

This is the shoe that’s still waiting to drop, one that will throw all previous analysis out the window. If the Lakers trade for Kawhi before the season begins, then winning now will feel far more plausible, LeBron at the post will be far more palatable. That’s the kind of tantalizing talent Kawhi brings. He’d instantly become the best shooter on the team and maybe the no. 1 scoring option. He’s also the kind of defender who would take a load off LeBron.

This won’t happen without the Lakers and Spurs coming to an agreement and without the former giving up a combination of their assets. This is why it also makes sense to wait a season, let the one-year deals run out, and then sign Kawhi outright. Then again, there’s risk that with that approach, too. Paul George staying in OKC ring a bell?