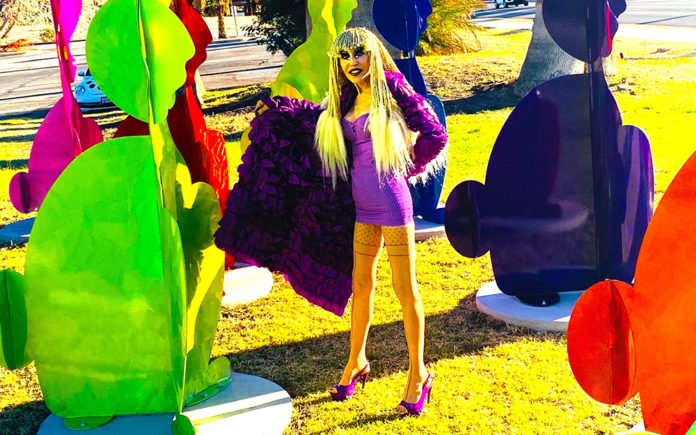 Karen and Tony Barone are synonymous with the arts in the Coachella Valley. They are larger than life in so many ways – in their command of any medium; in their large than life sculpture; but mostly it in their love for each other. Their partnership was created in love and thrives in their artistic meld.

The Barone’s have work installed all over the world. Their work can be found in Japan, Hong Kong, London, Paris, New York, Stockholm, Florida, Los Angeles, Orange County, San Francisco, Atlanta, Chicago and Dallas.  Locally one only needs to visit Palm Springs Animal Shelter to see   Mademoiselle Coco and Monsieur Pompadour. The R. Hero works can be seen in Rancho Mirage and 33 other locations across the US. The Aqua Restaurant boasts several large Barone works. On any day Karen is her own work of art – eclectic and stylish, she breaks all the rule of fashion and create an ethereal vision of art meets runway. 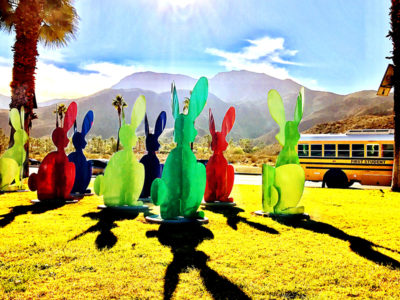 The latest Barone installation is located adjacent to the site of the former Chart House Restaurant. The Chart House Restaurant was built in 1978 and designed by architect Kendrick Kellogg. The building was an example of “organic modernism.”  To some the building gave to some the appearance of a giant sea creature washed up on some ancient shore. Today the spot is the home to a warren of rabbits inspired by another mythical creature.

DESERT©WARREN is comprised of 9 rabbits ranging in size from 8 ½ feet to 7 feet in height. They are bright, colorful creations that change in the day light and glow in the evening thanks to the lighting provided by local solar company Hot Purple Energy.

The rabbits were inspired in part by the Barones’ research into the Irish spirit, Pooka.  According to legend the Pooka may appear as horse, rabbit, goat, goblin, or dog. The Pooka is said to have the power of human speech, and has been known to give advice and lead people away from harm.

“While the rabbits are inspired by the Pooka, our rabbits are named Polka-Pookas, and are so much more,” said Karen. “To Tony and myself the rabbits are genderless, harmless creatures harboring no ill-will. They make people smile. And like us, rabbits are vegan, harming no other living creature for sustenance.”

“DESERT©WARREN is also an example of private sponsorship supporting public art. This project is with the blessing of the City of Rancho Mirage, the owners of the Atrium, the crew that assisted in the installation and the individuals and businesses that stepped to sponsor a rabbit.  The Ritz-Carlton is sharing our DESERT©WARRENcards with their guests as well their Ritz car, when asked, to take guests to the site.”

“Several sponsors have given names to their rabbits. Dr. Wendy Robert’s sponsored rabbit is named Happy. It is a reflection of her love of art and beauty,” continued Karen. “Leo Milmet sponsored the purple 8 foot rabbit. Leo’s rabbit is named Little Rabbit, his grandmother’s childhood name for him. Wed Wabbit, yes the red one, is sponsored by Jim and Carol Egan.  Both are active in the art community. Jim is on the Board of the PS Art Museum.”

“DESERT©WARREN will remain at the site until the end of May. After that the rabbits will be brought to their new homes including one at the Greater Palm Springs Convention & Visitors Bureau.”

“There will be a celebration of DESERT©WARREN on January 20thfrom 1 – 2 pm. Tony and I will talk about the work. The celebration will include music and dance. This is a free event and all are welcome.”

Karen noted, “The rabbits have the ability to engage all people – regardless of age. The rabbits are metal creation but they are, like our animal pieces, they have a heart that causes an emotional response. Most often that response is a smile.”

“We are encouraging people to interact with the rabbits. We hope that people will walk around the rabbits, take and post selfies with them – to participate with the art.”

“DESERT©WARREN is meant to be a public event. The work breaks down the façade of ‘art’ and is meant to speak to the viewer on an individual basis. The complexity of the work is built into its simplest of terms – pure enjoyment.”

Tony and Karen plan to continue to bring art into public spaces.  It is artists like the Barone’s that paved the way for events such as Desert X. The Barone’s works remains an inspiration for art in public spaces and serve as a good-will ambassador to the power of art.

For more information on the fascinating world of Karen and Tony Barone visit baroneart.com