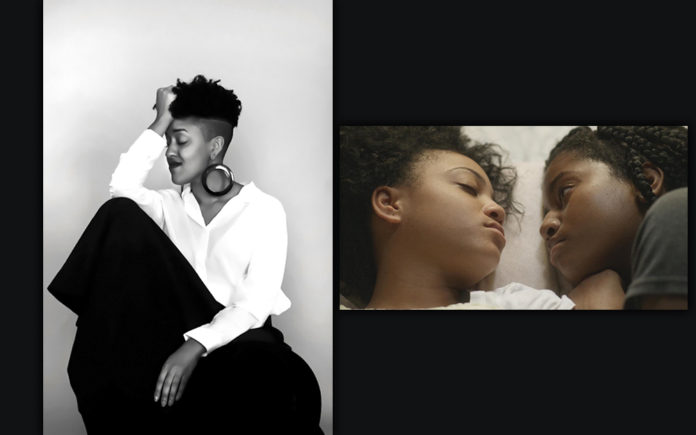 When the Palm Springs International Short Film Festival’s program “Secrets and Lies” concluded, the audience filed out of the theater, gathered in the lobby, where some lingered to connect with filmmaker Sontenish Myers and perhaps share a secret.

Myers’ fourteen minute film Cross My Heart tells the story of an American teen who visits her family in Jamaica where her cousin confides that their uncle has been violating her space and behaving inappropriately.  Troubled by the information and seeing her family in a different light, the teenager is conflicted when her cousin makes her promise to keep the secret only between them.

As a second year film student at NYU, Myers, who wrote and directed Cross My Heart, admitted that she struggled with the material.  She lost sleep and wanted to find another subject for her film.  But when Myers shared her idea with a classmate, the classmate reciprocated with her similar secret, and Myers realized it was a story too important not to tell.

With a foot in both the United States and Jamaica, Myers never told her family what her film was about.  It was important to Myers that she find the space and a way to explore her story and freely do what she had to do!   It was about survival and being a survivor.

CVW: What inspired Cross My Heart?

When you’re dealing with family dynamics at every turn, determining the right thing to do can be maddening.

CVW: Have you had to keep a terrible secret?

SM: Yes. I think I would do things differently if I could go back. I 100% percent believe in honoring the boundaries and experience of the person who confides in you. But participating in the silence is incredibly difficult, and you risk normalizing a dangerous thing. It’s a fine line.

CVW: Would you keep the “cousin’s” secret?

SM: Yes. But I would protect her as fiercely as I knew how.

CVW: What should young girls do in that situation?

SM: Tell someone that you believe would advocate for you. TALK TO SOMEONE. You don’t have to carry your traumas on your own. And it’s not your responsibility to carry how the secret could affect someone else.

CVW: What should the audience take away from the film?

SM: Traumas and issues that happen within your family are SO complicated. It’s packed with relationships, history, memories, cultural taboos, nuances, transgenerational traumas, etc. But in the face of all that, you MUST try. TRY.

To act like its normal – to not give the person who has confided in you the support that they need – is a mistake.

In the lobby of the Palm Springs Cultural Center, Myers graciously talked with emotionally impacted audience members until the theater closed.  Touched by the intimacy of the subject and quiet beauty of the film, people clung to Myers and wept for their own secrets, the secrets they still carry for others, and the hope for healing.