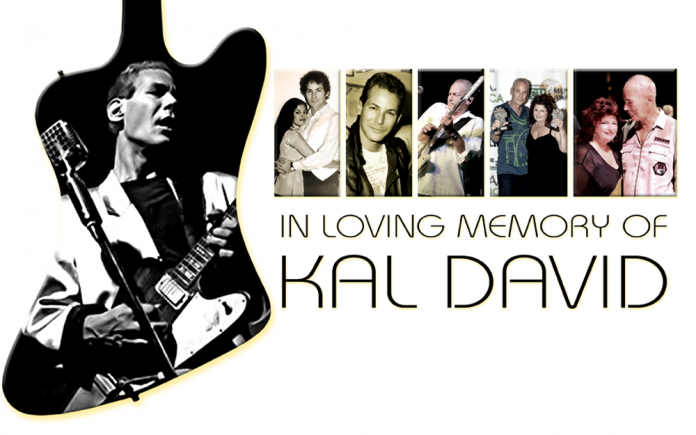 The last time I saw Kal David was at my Desert Sun retirement party, May 31, 2019. He was playing guitar with John Carey and the Yve Evans band. He was a sideman.

I wish Kal could have been feted with a night like that of his own. I always figured he would. Even when he was struggling with pneumonia this week, I thought I’d get another chance to sing his praises for the way he could shred a guitar and sing the blues.

But now that thrill is gone. His wife, the talented and soulful singer Lauri Bono, said today he passed away at age 79.

Kal had a notable career before arriving in the desert. He had a teenage band with Peter Cetera in the early ’60s. He played lead guitar for John Mayall in the early ’80s. He and Paul Cotton, future lead guitarist for Poco, had a dual lead guitar band called the Illinois Speed Press in the late ’60s, which was ahead of its time with its mix of Chicago blues and Laurel Canyon hippiedom.

But Kal’s real contribution was to Palm Springs in the late ’90s. The city was trying to revitalize its downtown and, for some reason, it chose to do that by installing “The Fabulous Palm Springs Follies” in the Plaza Theatre with its white, vaudeville-inspired material from the ’30s and ’40s. Kal and Lauri launched their Blue Guitar nightclub upstairs and next door to the Follies in 1998, and proved an alternative reality to vaudeville could find an audience in Palm Springs.

As successful as the Follies were in trying to keep the music of Frank Sinatra, Dean Martin, Vic Damone and Jerry Vale on a loop as the soundtrack of the desert, the Blue Guitar also managed to bring an authentic Black sound to Palm Springs. Kal and Lauri’s supporting musicians were called the Real Deal Band because their blues sounded so authentic. They featured little-known Black blues artists Kal brought in from his old neighborhood on the south side of Chicago, including King Ernest, Finis Tasby and Johnny Dyer.

Seeing them catch on in downtown Palm Springs was like hearing Randy Newman’s “I Love L.A.” become the theme song of Los Angeles. It was just so incongruous, you had to love it.

But it was mostly Kal’s virtuosity that brought in the crowds. One famous musician (whose name I can’t remember) said it was unfair that Kal could play guitar like Eric Clapton and sing like Robert Cray. I think he played more like Buddy Guy. If you heard Kal play The Beatles’ “While My Guitar Gently Weeps,” featuring Clapton on lead guitar, you might think Kal played better than Clapton. His version of Jimi Hendrix’s “Red House” also was incomparable.

I once brought James Gurley, lead guitarist for Janis Joplin and Big Brother and the Holding Company, into the Blue Guitar to see Kal. Gurley recorded a pretty amazing guitar solo on the blues-based “Ball and Chain” and I thought he might enjoy dueling with Kal. But, after listening to one set, James turned to me and said, “Are you crazy? Do you think I’m going to get up and compete with that?”

Kal rose to similar levels of greatness as a guest in a Jimi Fitz McCallum Theatre showcase of local artists. Kal could not only shred, he’d arrange the blues to build to sonic levels like an F-14 Tomcat. The music would come to a climax with Kal breaking sound barriers like Tom Cruise’s Maverick.

Kal once chastised me for calling him a “local” artist. It’s true. He was an artist of international renown. Kal and Laurie belong in the history books just for being scheduled to play B.B. King’s last gig before he died.

But I never hear their music on B.B. King’s Bluesville or the blues channel on Spectrum Music, which plays a lot of terrific contemporary blues. Only a few of Kal’s albums are on Spotify.

I’m just glad I have many of Kal’s CDs to remember the music he brought to Palm Springs. He was our blues king. He was our guitar god.

From the Publisher: Last year we gave Kal David and Lauri Bono our “Lifetime Achievement Award” at the CV music Awards. It was our honor to do so and we are so grateful we got to do that before Kal’s passing. He truly was a legend not only here in the desert but throughout the country for so many years. Phil and I send Lauri all our love during this difficult time. We have written several articles about Kal in CV Weekly over the years: 7-23-2020 by Noe Gutierrez/ 1-6-2015 by Lisa Morgan/ 2-12-2013 by Lisa Morgan and a Cover story on 7-26-2012 by Lola Rossi. You can go to the Coachella Valley Weekly Archives to read these articles. I would like to thank Bruce Fessier for sharing his tribute to Kal with CV Weekly.

Lauri also wanted to let everyone know that there will not be a funeral or memorial service for Kal as that was his wishes. She did say that, when the dust settles, she will throw a major benefit concert to let Kal’s many fans and friends honor him properly. RIP Kal.