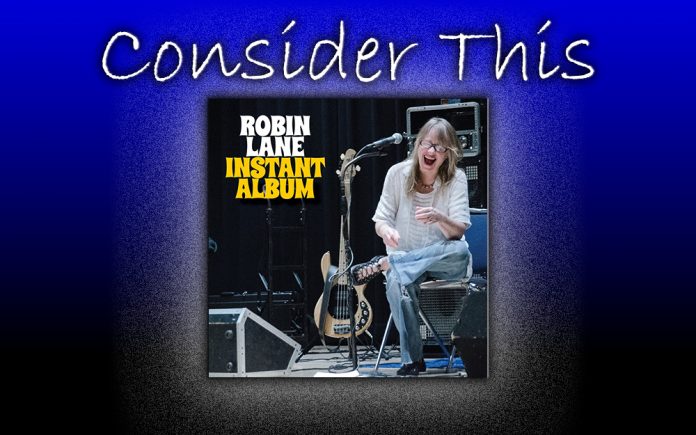 In a perfect world, the name Robin Lane would be as recognizable as Chrissie Hynde, Deborah Harry, Joan Jett, as well as the Wilson sisters of Heart, The Go-Go’s and The Bangles. Back in the late ‘70s and early ‘80s, Robin fronted Robin Lane & The Chartbusters, but that’s not where her story begins.

The L.A. native was born in 1947 and grew up in Los Angeles on the margins of showbiz. Her dad, Ken Lane was Dean Martin’s pianist and wrote his signature song, “Everybody Loves Somebody.” Although she wasn’t close to her dad, she shared his musical talent.

Robin came of age during the Swinging ‘60s and experienced the infamous Sunset Strip scene first-hand. During that era, seminal L.A. Rock bands like the Byrds, the Doors, Buffalo Springfield and Love ruled the Strip, making their mark in clubs like the Whisky A-Go-Go, Ciro’s and Pandora’s Box. Her friendship with the band Crazy Horse resulted in an association with Neil Young. That’s her, adding backing vocals to the song “Round And Round” from Neil and Crazy Horse’s first collaboration, Everybody Knows This Is Nowhere. At this point she was married to British guitarist Andy Summers, who made his bones in bands like Zoot Money’s Big Roll Band, Soft Machine and a recalibrated version of Eric Burdon’s Animals. The couple divorced in 1970, and by the end of that decade, through the mid ‘80s, Andy was topping the charts as guitarist for The Police.

By 1977, Robin had relocated to Boston. A nascent singer-songwriter, she arrived armed with a clutch of original songs. She quickly realized that the sounds of Punk and New Wave had easily coalesced, creating a thriving music scene. Local acts like The Neighborhoods, The Real Kids, DMZ and of course, The Cars had begun making a name for themselves. After attending a three-night stand of Cheap Trick shows, she came away inspired, and determined to infiltrate that world. She immersed herself in the trailblazing sounds of Television, Dwight Twilley and The Flamin’ Groovies.

On the strength of her protean songs, Robin had already secured a record deal, now she just needed a band. She quickly enlisted hometown heroes like bassist Scott Baerenwald, guitarists Asa Brebner and Leroy Radcliffe, as well as drummer Tim Jackson. They settled on the unwieldy moniker of Robin Lane & The Chartbusters, as a sideways homage to Tom Petty & The Heartbreakers.

Robin’s songs served as a template, some she abandoned altogether, others became retrofit Rockers. The Chartbusters sound was a potent distillation of a plethora of influences: Punk, New Wave, British Invasion and a soupcon of Folk. Ironically, the label, Private Stock, (who, despite releasing Blondie’s debut, was best known for championing Soft Rock AM radio hits like Starbuck’s “Moonlight Feels Right,” actor/singer David Soul’s “Don’t Give Up On Us Baby” and the theme from “Laverne & Shirley,” “Making Our Dreams Come True”), were perplexed by the band’s new muscular sound. Naturally, they dropped them.

Luckily, the band landed at the Warner Brothers label. Their self-titled debut arrived in 1980. Despite their huge hometown popularity, the record barely scraped the bottom of Billboard’s Top 100. As the band began prepping their sophomore effort, they issued 5 Live EP, a blistering set that underscored their live appeal.

They delivered their second long-player, Imitation Life in early 1981. More expansive than the debut, it should have guaranteed the affection of their earliest admirers as well as enticing new fans. A whip-smart collection of songs, it highlighted Robin’s seductive contralto, which landed somewhere between Punk Priestess Patti Smith and Goth Goddess Siouxsie Sioux.

Both records and the EP should have been big hits, but somehow their giant record label dropped the ball. Sadly, Robin & the Chartbusters amicably split in the early ‘80s. All of them continued to work in the music industry and even reunited at the turn of the 21st century to record a third album, Piece Of Mind.

In the ensuing years, Robin has carved out a niche as a solo artist, releasing an EP and five full-length albums between 1984 and 2013. Recently, she and the band received some long overdue attention when Chartbuster drummer Tim Jackson directed “When Things Go Wrong,” a documentary that spotlighted the band’s compelling music and also delved into Robin’s intriguing history. Simultaneously, the record label Blixa Sounds compiled an exhaustive three CD set Robin Lane & The Chartbusters Many Years Ago. The collection confirmed that the record industry was too myopic to appreciate and champion the band. Robin aspired to be a distaff Iggy Pop, that wasn’t in the cards. Still, the sound she and the band created seemed to mirror the commercial appeal of Tom Petty & The Heartbreakers.

Recently, Robin released her sixth album, Instant Record. The 16-song set cherry picks tracks recorded over the last 30 years. It gets off to an insouciant start with “It’s Your World.” Haughty, almost bratty vocals are matched by chiming guitars, tensile bass lines and a rock-steady beat. Although this song was written a couple of decades ago, it’s tempting to think the opening verse is aimed at a certain tangerine-hued despot recently removed from power; “Stuck in your ivory tower, is this the year of the plague, can’t get away from here/What are you looking for, does it run away when you come near?” Switch out “ivory tower” for “Palm Beach Golf Course,” and it’s suddenly au courant. Whiplash electric guitars intertwine with winsome acoustic notes as sharp, sardonic lyrics take this craven windbag to task, as the world begins to pass him by; “People used to come to you, now there’s nobody there for you when the day is through/That they just pass you by, don’t it come, don’t it come as a big surprise.” Ringing acoustic guitars spiral on the outro, taking the sting out of the lyrical rebuke.

Although Robin’s best-known songs hew pretty closely to a Punk/New Wave/Power Pop paradigm, left to her own devices, as a solo artist she exhibits a wider range. Take the strummy acoustic Folk of “City Of Lights,” which pays homage to the legacy of Robert F. Kennedy. Equally woke is “Gaps In Justice,” a dirge-like anthem that denounces the for-profit prison system. Then there’s the moody magnificence of “Something’s Wrong,” which asks us to recognize that “There’s something wrong with opportunity, when it don’t help someone like me, someone like you would know it too if you stand in my shoes, there’s something wrong.”

The plain-spoken “It Makes No Sense” shares some musical DNA with John Denver’s “Leaving On A Jet Plane.” The wryly lyrics reflect on a wrecked romance with revelatory results; “You’ve given me back my joy, you’ve given me back my happiness, everything I ever was before was all because of you/And then one day you were gone, and I didn’t know what I should do, everywhere there were reminders of you, and it made me feel so sad.”

Meanwhile, the personal becomes political on the Jazzy “Benjamin.” Much like Joni Mitchell’s “Little Green,” this song recounts an unplanned pregnancy that results in adoption. Heartbreaking lyrics implore the prospective parents; “Spend a little time with Benjamin, fill his head with music of the world, don’t let him know his mother couldn’t give him all the love he’d need to grow.”

Several years ago, when her daughter was spending her summers there, Robin became involved with Camp Runoia, teaching a songwriting class at the Maine Summer Camp. Working with budding songwriters, she contoured new melodies to fit their original lyrics. She has included three here. “Leaving You” weaves plaintive fiddle into a tapestry of burnished guitars, knotty bass lines blurred keys and a tick-tock beat. Bittersweet lyrics bid a tender farewell; “I can’t believe I’m leaving you, where does the time go/You’re beautiful, you’re kind and you’re my best friend…and when I go, I’ll remember you, I hope you remember me.”

“Special To Me” is an elastic little Rocker that that matches marauding bass fills and swirly guitars to a tilt-a-whirl rhythm. The lyrics pay tribute to a mentor and friend; “You’ve guided me through my life, you’re so special to me.”On the break the song drifts into a surprisingly trippy, Psychedelic groove.

Slightly more lighthearted, is “Kitty Kat.” Sly and suitably feline, the mood and melody lean closer to Blossom Dearie than, say, Blondie. Lyrics pledge unconditional love to a sphinx-y friend with “Long, thin whiskers, big brown eyes, pointy ears and your meow cries/Even if I have to change your litter box, even if your cat food smells, I love you, I think you can tell I love you.”

The best tracks here unfurl almost one after the next. “Military Man” is cloaked in Countrified acoustic guitars, brittle bass, tart, electric riffs and pulsating beat. Although it was written nearly 30 years ago, lyrics like “I am a soldier fighting the war, keeping the enemy from our door, if you need protection, I’m your friend, but that’ll depend on the color of your skin” capture the blatant and unrepentant hatred that had a stranglehold on this country up until a few weeks ago. Well, almost.

Both “Not So Bad” and “From Goddess To Doormat” seem to be recall foundering romantic relationships. On the former, Robin revisits her Laurel Canyon roots. Jangly guitars and cracked Country fiddle give the tune a rustic Byrdsy/Buffalo Springfield feel. Lyrics like “I see mountains that touch the sky, where I want to live and die,” evince a cinematic quality that mirrors the arrangement’s wide-open vistas. The latter echoes touchstones like Carole King’s “Tapestry” and Joni Mitchell’s “Court And Spark,” Stripped-down and spare, this piano-driven lament is accented by dissonant harmonies. Cogent lyrics speak to losing oneself in a lopsided relationship; “Piece by piece relinquished, what I’d never give in a day, only I can’t find myself, how did love get away.” Self-worth is replaced by co-dependence. Well, almost.

Finally, “Passport To Paradise” displays a gossamer Girl Group shimmer. Stacked harmonies soar over pinwheeling guitars, spidery bass and spring-loaded beat. Sunny lyrics ask us to risk the safety of solitude and gamble on love; “Safe and sound in your world, where no one can find you, you watch yourself growing bitter, take time to consider/Let the one who loves you, be your passport to paradise, feel his arms around you, he’s your passport to paradise.”

Other interesting songs include the smoky and subterranean charms of “Banana,” along with the playful “Please Like Me,” which gently pokes fun at former neighbor (and ex-Flying Nun) Sally Field’s famous declaration at the Academy Awards. The album closes with a final Camp Runoia collaboration, “Casey, Bye Bye,” which offers a heartfelt farewell to a recently departed canine companion.

Instant Album unfolds like a series of aural polaroids, each capturing a moment in time. Consequently, the record feels both classic and contemporary. A pioneering voice, Robin has survived five decades in the music business. It’s been a rollicking roller coaster ride, and she still has a lot to say.