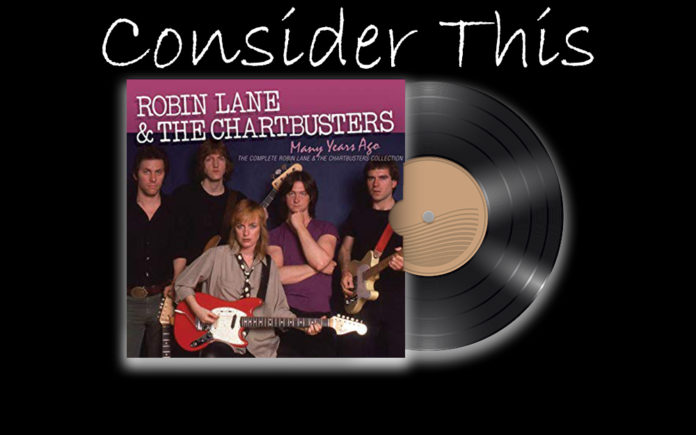 If you’ve never heard of Robin Lane & The Chartbusters, you’re easily forgiven. Despite their memorably lengthy name, catchy, yet complex songs and an ardent hometown fan base, the five-piece never had much of a presence on mainstream radio. Nearly 40 years later, that fact remains a head-scratcher, as this Boston band had the goods.

Robin Lane grew up in Los Angeles on the edges of the music business. In fact, her dad, Ken Lane, was Dean Martin’s longtime pianist and wrote one of his biggest hits, “Everybody Loves Somebody.” Even though she and her dad were estranged, she inherited his musical abilities.

Born in 1947, she was old enough to experience the infamous Sunset Strip scene of the late ‘60s. During that era,  bands like the Byrds, Buffalo Springfield, the Doors and Love were blowing minds in Clubs like Ciro’s, Pandora’s Box and the Whisky A Go-Go. A friendship with the band Crazy Horse led to an association with Neil Young. That’s Robin singing back-up on “Round And Round,” from his 1969 album, Everybody Knows This Is Nowhere.  At this point she had married and British Guitarist Andy Summers, (they would divorce in 1970). A decade later he would top the charts as guitarist for the Police.

An aspiring singer-songwriter, she relocated to Boston in 1977, armed with a plethora of original songs. She arrived just as for Punk and New Wave were exploding. Bands like DMZ, The Neighborhoods, The Real Kids, and of course, The Cars, were carving out a niche in the thriving club scene. When Cheap Trick played a three-night stand at The Paradise, she attended each show. Not long after, she received a Punk Rock tutorial from Alan “Alpo” Paulino, bassist from The Real Kids, her education became complete when she raided her roommate’s record collection, immersing herself in seminal sounds from Television, Dwight Twilley and The Flamin’ Groovies.

Actually, she’d already secured a record deal, so she was able to recruit a killer band. Bassist Scott Baerenwald and guitarist Asa Brebner had kicked around the scene for a while, they had recently played together in one of the city’s first Punk bands, Mickey Clean & The Mez. Guitarist Leroy Radcliffe had spent time with Asa as part of Jonathan Richman’s Modern Lovers. Drummer Tim Jackson completed the line-up. Their name, Robin Lane & The Chart Busters, was a tongue-in-cheek tribute to Tom Petty & The Heartbreakers.

Robin already had a surplus of songs, some she discarded, others became retrofit Rockers. The band’s sound became a potent concoction that streamlined myriad influences: British Invasion, Punk and New Wave with a hint of Folk. The record label, Private Stock, (best known these days for releasing Blondie’s debut, but notable at the time for a panoply of Soft Rock hits like “Moonlight Feels Right,” “Don’t Give Up On Us Baby” and “Making Our Dreams Come True,” a.k.a. the theme from “Laverne & Shirley”), were less interested in Robin and the band’s tougher sound, so they dropped them. But they rebounded, signing with Warner Brothers instead.

Their self-titled debut arrived in 1980, the first single, ironically, just scraped the bottom of charts. The band was huge in their hometown, but that popularity never translated nationally or globally. They released 5 Live EP as a stopgap before recording their second full-length record and it displayed a brawnier sound then the studio versions.

They delivered a sophomore effort in early 1981, but that too was lost in the shuffle. The record label seemed to abdicate all the responsibilities involved in breaking a new act and the band felt pretty much abandoned. Complicating matters, Robin and Leroy Radcliffe became romantically involved, married, were expecting a child together and were now breaking up. The band sputtered on for a bit and then called it quits.

Robin and the guys all continued to work in the music industry in different capacities and actually reunited for a few years in the early 2000s, recording a third long-player, Piece Of Mind. More recently, Chartbuster drummer Tim Jackson directed a compelling documentary about Robin and the band entitled “When Things Go Wrong.” The film chronicled Robin’s intriguing history as well as the band’s.

Now Blixa Sounds has released a career defining Robin & The Chartbusters compilation that aims to entice newcomers and completists alike. The Los Angeles-based re-issue label has assembled Many Years Ago, an exhaustive three CD set. The first disc features the band’s self-titled debut and 1981’s Imitation Of Life in their entirety.

The set opens tentatively with the first single, “When Things Go Wrong.” Tensile rhythm guitar pivots around a dropped beat and jangly lead guitar riffs, feeling both hypnotic and edgy. But it’s Robin’s vocals that command the listener’s complete attention. Her sultry contralto sandwiches neatly between Punk Priestess Patty Smith and Goth Goddess Siouxsie Sioux, but still conveys a warmth and earthiness those contemporaries hadn’t quite harnessed at that point.

The debut deftly hopscotches through a variety of styles. Beginning with the Power Pop/Rockabilly stomp of “It’ll Only Hurt A Little While,” which features this telling couplet; “Who said it would be easy, who said You could stay high, we’re like dead rats in a maze, floating by on a river Of life,” A tricked-out guitar solo on the break echoes the duck-walking grace of Chuck Berry, without ever feeling derivative.

“Without You” blends staccato vocals, search-and-destroy bass lines, a “George-Of-The-Jungle” backbeat and aggro Surf Guitar. Robin’s jittery delivery underscores a fragile sense of independence; “I was tense and I was nervous, didn’t know where to go, when I was so low, that I was on my own without you.”

The best tracks here include the wailing whipsaw of “I Don’t Want To Know,” which references the rise and fall of Punk Rock’s first Fun couple, Sid and Nancy. Over a slingshot rhythm, angular bass and whip-crack riff-age, she parses the details of Sid Vicious’ drug-addled descent, culminating in the stabbing death of his abrasive partner in crime, Nancy Spungeon.

Then there’s the angular angst of “Waitin’ In Line,” which pairs a tick-tock, hi-hat beat to stripped-down guitars. Here, Robin issues a stark warning; “You’re sitting there so at ease, you digest me with facts like a piece of cheese, and then you chew me up and you spit me back, but you better watch out ‘cause I strike back.”

A locomotive rhythm and darting guitars drive the action on “Many Years Ago.” Nuanced lyrics wrap a True Crime narrative around a lean and economical melody that echoes ‘60s Garage stalwarts like the Seeds and the Music Machine.

Other standout tracks include the New Wave-y/Folk Rock pastiche of “Don’t Cry,” the twitchy, teardrop Bolero of “Be Mine Tonight” and the Country-tinged “Kathy Lee.” The self-titled album closes out with the blistering pogo of “Don’t Wait ‘Till Tomorrow.”

The second half of disc one is devoted to 1981’s “Imitation Of Life” album. Robin & The Chartbusters’ sophomore effort neatly doubles down on the winning formula of their debut, but manages to volte-face between primitive urges and a sleeker, more polished sound. The opening cut, “Send Me” weaves marauding bass, curvilinear guitars and a metronomic meter. The mood feels subterranean and covert. Actions and emotions are hinted at rather than spelled out.

From the stealthy Goth of “What The People Want” and the torchy groover of “Say Goodbye,” to the bee-stung bravado of “Rather Go Blind” and the winsome shimmer of “Solid Rock” The band’s growing pains are on full display. Still, as the album plays out, the jigsaw pieces manage to come together.

The title track is a fractious, whirling dervish anchored by a rough and tumble beat and sinewy guitars. A vivid cri de Couer, it offers a mission statement of sorts; “Living on the planet isn’t a chore, I got what I need, I don’t need more.”

The amphetamine rush of “No Control” is powered by a pile-driving rhythm and sugar rush guitars. As the arrangement gathers speed, harmonica and subtle keys are layered in. By the instrumental break, guitars rev and see-saw and the drums lock into a blitzkrieg beat, before stopping on a dime.

Other interesting tracks include the crunchy delight of “Pretty Mala,” and the Girl Group-y swoon of “Idiot.” “Imitation Life” closes with Spector-esque ballad “For You.”

The first 11 tracks of disc two are new tunes that were  recorded by Robin and some of the Chartbusters for a third album. Ultimately, only four were released as an EP entitled Heart Connection and credited solely to Robin Lane. There’s a smooth and glossy sheen to songs like “Hard Cover” and “Believe,” that screams mid ‘80s production values. “Shot In The Dark” nearly collapses under the weight of shiny, happy synthesizers and “True Confessions” is mired in icy keys and programmed drums.

The seven unreleased songs from the Heart... sessions manage to display a toughness the EP lacks. “Lookin’ So Hard” positively swaggers while “Words Of Love” is strikingly ambitious. The rest of Disc two is given over to demos and studio rarities that date back to the late ‘70s and end with two solo 1990 tracks that harken back to Robin’s singer-songwriter beginnings.

Disc Three features the 5 Live EP in its entirety. The mini-set confirms that Robin and the lads were a formidable live band. The remaining 17 tracks are all live and previously unreleased. They include gems like the hulking “Caught In The Act,” the searching “Somebody Else” and the piquant “Talk To You,” Then there’s the rollicking “Are You A Hero Now,” the gangly athleticism of “Last One To Know” and so much more; truly an embarrassment of riches.

Why Robin Lane & The Chartbusters never made a bigger splash remains a mystery. Robin was the first woman to front an all-male band, beating both Chrissie Hynde and Joan Jett to the punch. Their concise songcraft, matched with her shape-shifter vocals and whip-smart lyrics evinced the kind of appeal that could attract Punks and Rockers alike. She aspired to be the female Iggy Pop, but that wasn’t in the cards. Ironically, the sound she and the band created positioned them as a distaff Tom Petty And The Heartbreakers. Sadly, the music business was too short-sighted to recognize it.

Luckily, Blixa Sounds has given the world another chance to discover Robin Lane & The Chartbusters. Now it’s up to the World to catch up.