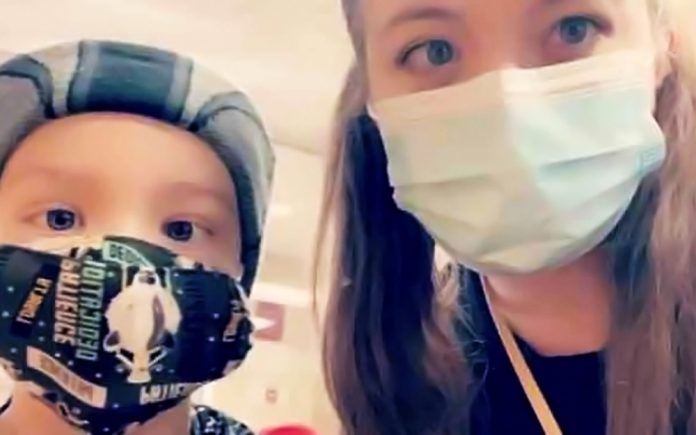 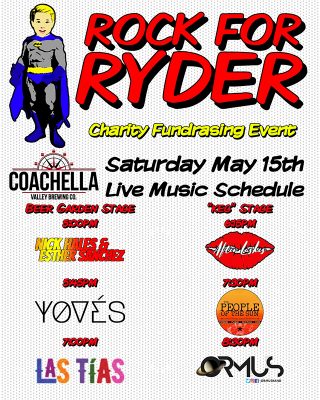 This coming Saturday, May 15th, Coachella Valley Brewing Company will be hosting an event to benefit a local family who’s 5 year-old is battling brain cancer. This all age event will include 2 stages of some of the best live music the Coachella Valley has to offer. In addition, there will be a food truck and a silent auction containing items that range from artwork and jewelry by local artists, to gift certificates for services and more!

As the writer of this article, I must admit that this story is as close to my heart as it is personal. Destani Teague, the brave, resilient and very young single mother of Ryder is a dear friend of mine. I have known her and Ryder for several years. That being said, the evening that I received a phone call from Miss Teague, informing me that Ryder was being immediately airlifted to Loma Linda Children’s Hospital was a moment that I will never forget.

Teague: “Ryder had been complaining of headaches and nausea for a few days. At first I thought there could possibly be mold in my AC unit that was causing him to feel that way. So, I had it cleaned out but, there didn’t seem to be anything dangerous growing in there. A day or two later we went to the trampoline park and I watched him jumping. I observed him intently looking in the direction that he wanted to go in and his balance seemed to be really off. He seemed frustrated and started crying which deeply concerned me.”

“It was when he woke up with one of his eyes off-center that I took him to urgent care where, after only examining him for a few minutes, they informed me that he needed to be taken to a hospital as soon as possible. When we got to the hospital, the nurse asked Ryder to follow her by walking in a straight line and poor baby, he just couldn’t do it no matter how hard he tried…my heart sank. Within an hour or two he was airlifted via helicopter to Loma Linda because his situation was truly dire. I was absolutely terrified. They wouldn’t even let me ride with him in the helicopter so I had no choice but to let my baby fly away from me with strangers while my mother and I followed in a car. That was over 6 months ago and we have been living between the hospital and the Ronald McDonald House ever since.”

Teague continues: “It was October 30th when we arrived at the hospital and the doctors found a, ‘tangerine sized tumor’ at the top of his spinal cord. It was on November 2nd when he had his first surgery to remove the tumor. We celebrated his 5th birthday in the Loma Linda children’s ward on November 11h. It was a day or two later that we were informed that the tumor they removed was malignant, and that we were going to have to stay for many months so he could receive chemotherapy.”

Ryder has all but completed his chemo treatments and his prognosis is positive. Now, Miss Teague needs to focus on finding a safe convenient place for them to live within their means. That is exactly what her mother, Ryder’s grandmother, Debra Arauz was doing when yet another disaster struck their family. Because when it rains, it pours…last weekend, Ms. Arauz was looking at potential houses for Destani and Ryder to move into when she was in Desert Hot Springs. She got out of her vehicle so she could snap pictures of a property to send to her daughter when someone jumped into her vehicle and took off with her purse, her laptop and other items of value.

Ms. Arauz has been a rock for her daughter and grandson throughout this harrowing ordeal by spending as much time taking shifts in Loma Linda as possible while doing everything else she can to be the support system that is needed.

As an individual who loves this family, I am asking for the community…Ryder’s community… to come together and support this family the way we would want our own families to be supported. There are many ways to do this. You can come to the benefit at Coachella Valley Brewing Company this Saturday where there will be multiple opportunities to contribute. If you can’t do that, you may donate goods or services to be auctioned off for the cause by contacting the brewery or simply dropping off your donation between now and Friday. There is also a GoFundMe account set up for Ryder.

As the old saying goes, “It takes a village to raise a child.” I believe that our extended village can do right by this family who needs us.