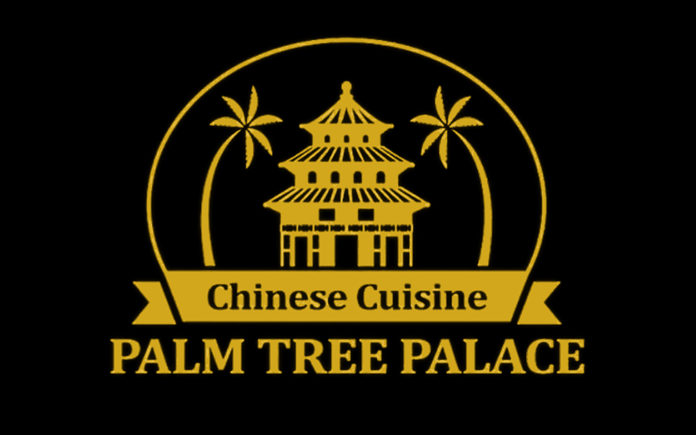 It all started with my boyfriend’s quest for authentic dim sum, which is steamed or fried dumpling style pockets of goodness grouped together. I saw a new spot in La Quinta that I had heard great reviews about, Palm Tree Palace, located in the same shopping center as one of my favorite restaurants, Pho Vue. We popped in for a reconnaissance mission by retrieving a to-go menu. There in the menu were the dim sum items that he had been searching for including, Har Gow (steamed dumpling wrapped in a translucent coating) and Siu Mai (steamed dumpling stuffed with shrimp, pork & mushroom), among others. Besides the dim sum, the menu had a variety of other dishes not usually found in many Coachella Valley Chinese restaurants, such as Peking Duck. We were intrigued and excited to try out their food. 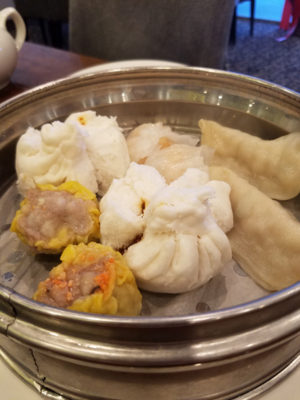 Palm Tree Palace only opened about three months ago, and has already gained popularity, noted by how busy it was on a regular Thursday night, in June no less. The dining space is sort of plush Chinese, with modern accents, and soft cushy chairs, kind of like an inviting formal Asian living room. As all the booths were occupied, we took a table in the center, giving us a full range view of our surroundings. They automatically serve hot tea and wontons with a sweet sauce upon being seated, and who doesn’t appreciate a little freebie appetizer to get those taste buds moving.

We opened the menu and re-established what we had pre-ordered in our minds, and then some. When our very helpful server came to our table, and after we ordered what we thought we wanted as far as the dim sum was concerned, she suggested we order the Paradise Desire, which would incorporate what we wanted, but not as much food and also for a lower price. Her suggestion had the Har Gow, Siu Mai, Chicken Dumplings and Char Siu Bao (steamed fluffy buns filled with BBQ Pork).  There was two of each and ended up being more than enough. The dim sum came in a tin steamer pot, and was opened before our eyes with a dramatic lifting of the lid, liberating a cloud of steam with the pillows of flavors resting underneath. They were all delicious, I think that my favorite was the Sui Mai and the Chicken Dumplings. 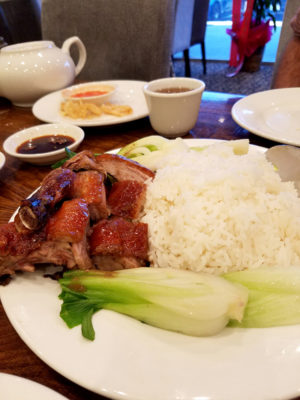 For a main dish we shared an order of their Hong Kong Roast Duck and rice. The duck was super tender, with crispy skin, served with a distinctive gravy. Bok Choy and steamed rice completed the dish. Between the dim sum and the duck dish we were full, but there were so many other menu items that we wanted to order, such as the classic Moo Shu Pork, Steamed Filet of Sole (with cilantro, ginger and scallion sauce), BBQ Spare Ribs, Crispy Garlic Chicken Wings ( with garlic, green onion and jalapeno), and of course their Peking Duck. Guests can order the specialty duck dish as a whole or half, served carved with buns, scallions and hoisin sauce. Yes please!