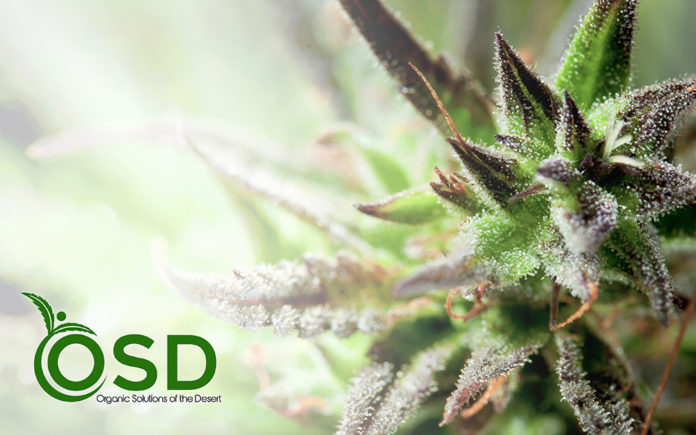 Palm Springs in winter is one of the best places to be in the country.  People are lining up not only to enjoy the sunshine and Film Festival, but also to purchase marijuana.

On January first, it became legal in the State of California for licensed dispensaries to sell Adult Use “recreational” marijuana to those 21 years and older.  As significant and auspicious as the end of marijuana prohibition is, for dispensaries it is more work than celebration.

ORGANIC SOLUTIONS OF THE DESERT

“It’s a way bigger undertaking than I ever thought,” said Jim Camper, Owner,  Organic Solutions of the Desert, Palm Springs.  “It’s been crazy.  We had over 150 rec [recreational] patients on our first day open and it has stayed constant.”

Including Camper’s regular medical patients, Organic Solutions of the Desert (OSD) is serving 300 to 350 people a day.

“This is a tourist destination.  Ninety percent of the rec patients were from out-of-state,” said Camper.  “We know exactly because we have a page they fill out to buy from us.  Many said they came for the weather and the marijuana.”

OSD has been in business for seven years and Camper was one of the first in the city legally licensed to sell medicinal marijuana.  He incorporated in 2006 and has been in the cannabis industry his entire adult life.

Camper received his “temporary” state license to sell recreational marijuana December 31, at 6:00pm.   California is still in the process of hammering out legal details and much of the regulations are in flux.

“Since January 1st was a holiday, we decided to close the doors and get to work,” said Camper.  “We had all hands on board and we worked all day to get ready to open on January 2nd.  It was totally necessary.  There was a lot to do to be prepared.”

Camper hired new help bringing his total employees to 22, but anticipates he will have to double his staff to make things run even more smoothly.

“I didn’t anticipate long lines where people might stand for hours like in Colorado or Las Vegas when those states made rec legal,” said Camper.  “People here waited 30 minutes.   For the most part no one complained.  People seemed fine with it.”

OSD is located on Ramon Road, directly south of Palm Springs International Airport.  It is a light industrial area and the building is nondescript with no windows.  Jets and private planes pass directly overhead so close it’s jaw dropping to watch.

“We have had all kinds of questions from new patients and our regular medical users as well,” said Camper.  “The biggest concerns are the taxes and how it’s going to affect them.  They want to know the difference between buying rec and medical.  A lot of people are upset about the tax rate, but hey, they knew it was coming.  They voted on it.  All we can to do is help them out with suggestions.”

Camper did his best to make sure he had everything covered his first day open for recreational sales, including additional parking.  To avoid traffic jams and not draw attention from the city, he negotiated with neighboring businesses for extra spots.   And, it worked.  As one car pulled out, another took its place.

“The city has been good,” said Camper.  “They’re easy to work with.  I haven’t had any problems.  I just want to make sure I’m doing everything I can, and doing it right.”

The OSD lobby was full.  Every seat was taken, a few stood.   The average age looked to be 40ish and older.

Behind the scenes, away from the dispensary, people were hard at work managing product; their gloved hands checking and rechecking buds and canisters.

Camper’s office is roomy, devoid of décor.  It’s his personal space and geared toward work, not entertaining.  It’s not neat, but it’s clear he knows where everything is.  Stacks of paperwork are grouped together by big black metal paperclips an inch thick.  There is no attempt to hide the profuse, heavy bundles of blue cables strapped and draped along the walls supplying current to a myriad of security cameras and television monitors.

An eighteen-gallon container sits open with a large taught bag of marijuana Camper had to reject because the grower did not have proper paperwork that made it legal for Camper to sell.  Staff interrupts with questions, holding delivery slips and confused about what they should do, requiring Camper to check on the situation and make a decision himself.

“There is so much that we don’t know.  So much is being changed and put out there,” said Camper as he hefted a sheaf of printed material.  “I’ve got to make sure we are on top of it.  I’ve worked for a straight 16 days.   We are just trying to keep our heads above water with all the new regulations.”

Relying on his attorneys for the more complex questions, Camper constantly checks the State’s various websites for up-to-date information.

“You have to know where to look and what for,” said Camper.  “There’s a lot of reading involved.”

Most of OSD’s product is grown regionally.  Twenty percent is grown on site; the rest is grown in Southern California.  Camper does a little business with Northern California, but chooses to support local growers as much as he can.

“We don’t know how that is going to change because many growers don’t have their licenses,” said Camper.  “I’ve heard 80 percent may not be compliant.  I’ve lost some of my best growers, because they don’t want to go the legal route.  Some of it’s because of cost, some don’t know how.  It’s just insane with the State right now.  What has to be done.  The requirements.  It’s hard to keep up.  Purchasing is more complicated than before and there is no way to get everything in order overnight.”

Camper has also obtained a distribution license so he can better control and monitor his own product.  OSD has 8,000 square feet of dedicated cultivation space on location.   That amount is now considered a small grow operation as cultivators are coming into the valley setting up massive growing facilities covering hundreds of thousands of square feet.

“There was supposed to be a five-year hold on large corporations entering the market,” said Camper.  “But, it looks like they have already started in the business.”

Camper always believed marijuana would be legal someday.  However, he though it would be sooner.

“When I was a kid, I thought it’d happen by the time I turned forty.  It’s 25 years later and it is a lot more work than I anticipated.”

Last week, the Trump administration announced it would end the Obama-era lax Federal policy that protected State’s rights to sell both medicinal and adult use marijuana

“It doesn’t surprise me that they want to shut it down,” said Camper.  “Worse, I think Sessions [Jeff Sessions, US Attorney General] has higher expectations than that.   For what it’s worth, I hope Trump will at least allow the medical, but I’m concerned he’ll turn them [the Feds] loose on the recreational, which is scary.  Why couldn’t he have done it six months or two weeks ago?”

Camper is optimistic that the states that allow legal marijuana and are heavily invested have too much tax revenue to lose, and will fight back against any move to stop marijuana sales.

“But, it doesn’t mean we might not get raided,” said Camper.  “It still leaves us susceptible.  I haven’t had to look over my shoulder for seven years since we were legal to do business here.  Now I have to worry and wonder if I should have even gotten my rec license.”

Camper was born and raised in Los Angeles.  After graduating high school he went to Europe.  What started out as a three-month tour before attending college, turned into eight years of exploring the world.

“I traveled around Iran while the Shah was in office,” said Camper.  “I was in Afghanistan before the Russians invaded.  I spent a year and a half in Nepal.  I had a curiosity to see for myself.  I wanted to go to the source and buy hash for four cents a gram.”

In the 90s, Camper was diagnosed with Hepatitis C, which he contracted during his travels.  At the time, there was no simple way to treat Hep C and Camper turned to marijuana.

“That’s why I went into this business,” said Camper.  “I knew people could be helped with medical marijuana.  I can’t say if it helped my condition much, but it was a better choice than what the doctors were proposing.  It was either hardcore meds or wait it out.  Recently, I took Harvoni and the Hep C was gone just like that.”

For now, Camper’s clientele are 75 percent medicinal and 25 percent recreational.  With all the changes in the laws, Camper is concerned that he may no longer be able to help the homeless or offer “compassion meds” for those in need like he had before.

“We can no longer give anything away for free,” said Camper.  “It’s a shame.  We have to explain that ‘patient appreciation’ days are done.  But, I want to find a way to help the people who most need it.  Hopefully, this will all get ironed out.”

OSD is a family business.  Two of Camper’s four children work for him.  His mother is the office manager; his father is Chief Financial Officer.  Camper’s folks owned Torre Nissan in La Quinta before they “retired.”  They have brought not only their business acumen, but also their favorite dedicated employees.

“My mom is a mother to everyone here,” said Camper.  “I’ve got a great staff.  Most of have been with me for years.”

Camper looks more weathered than his 65 years.  But, behind his laid-back California stoner charm is a wise man, shrewd entrepreneur and successful business operator.

“I built this business from scratch,” said Camper.  “It’s been seven years, so I want to be sure it all goes as planned.  It’s complicated right now and I need to know everything is done properly.  It’s just the way I am.  It’s been a long ride, but a good ride.”

Camper is considering retiring, maybe in a year, to let the next generation take over.