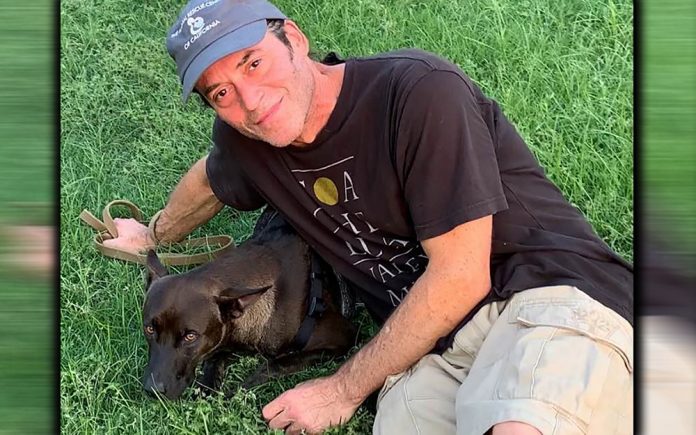 Sometimes an experience with one dog leads one down a path they never anticipated, the road to becoming a “rescue warrior”. The year was 2009, and housing foreclosures pushed many families and their pets from their homes.  More animals ended up on the streets and in shelters.  Kirk Geiger, Coachella resident and animal lover, learned about a King Boxer dog left behind in a neighboring back yard.  The dog’s family had moved out without making any arrangements for his care, and callously failed to leave food and water.  Another “rescue warrior” was born that day, as Kirk could not bear to think about a lonely hungry animal so close by.  He sprang into action to get the dog a new home.

Kirk learned about how an economic downturn can trickle down to harm animals.  He also learned that not everyone cared properly for their pets, and would discard them for trivial reasons.  Kirk worked in the fields of acting and construction, but somehow made time to volunteer at a nearby private animal shelter.  He connected with Christine Madruga who operated the Pet Rescue Center “no kill” private facility for homeless dogs and cats.  When Christine took much needed vacations, she hired Kirk to operate the facility.  When answering the many phone calls from folks finding stray animals and others wanting to rehome their own pets, Kirk went beyond the call of duty.  He understood that helping pets means helping people.  One exasperated called wanted to find a new home for a pup that continued to relieve itself inside their home.  They had tried training techniques to no avail.  Kirk went to their home with a crate large enough for the dog to stand up in, and taught the family the steps involved in crate training.  The children were thrilled, and the dog beamed happily knowing there was success.

Over the years, Kirk and his wife Noelle informally saved more street dogs, paying for food, supplies and vet work.  During the height of the pandemic, Kirk’s acting assignments dwindled.  Dogs needing help came to his attention.  The couple decided to form a 501(c)3 charitable animal welfare organization so they could accept tax deductible donations and help more creatures.  The Animal Rescue Center of California was born, based in Coachella, by a couple wanting to serve the East Valley’s people and pets.  Christine Madruga was first to join the board of directors to advise and support the new rescue group.  (The Pet Rescue Center is now operated by Loving All Animals)

Saving one dog does not change the world, but it changes the world for that one precious pup in peril.  A call came into Loving All Animals.  There was a very thin black shepherd dog roaming a residential Coachella neighborhood for the past two weeks.  The caller loved dogs, had two in her home, but could not get near the scared animal.  Another neighbor put out a water bowl.  The caller was advised to provide some dog food.  Text messages and Facebook went out to the rescuers, particularly those able to handle a frightened large dog.

Kirk Geiger finished working on his car and quickly headed over to the home of Maggie Alvarado.  The scared animal was still sequestered underneath her car with a bowl of food.  Sadly, another neighbor was seen throwing rocks at the skittish young dog.  Maggie’s nephew, nine-year-old Mike, was already working to gain the animal’s trust which caused him to return to their neighborhood in spite of the cruel neighbor.  Mike was instrumental in helping Kirk capture the dog they named Hopper.

Kirk gave Mike his scanner in order to check for a microchip.  It was a familiar story…there was no microchip, there was no collar with an ID tag, and the dog was not neutered.  Kirk wisely brought hot dogs, a good treat utilized to capture dogs on the run.  It took an hour to coax Hopper into Kirk’s car.  Mike offered Hopper his sweatshirt which had his scent on it.  The dog now sleeps with the sweatshirt every night.  This dog loving family offered to help Kirk with other rescue efforts.  Maggie offered to be a Spanish interpreter during his work in Mecca, and Mike would love to ride along.  Hopper seems to have recruited two more rescuers.  Kirk explains, “I could not have saved Hopper without this family.  They are an inspiration.”

Hopper was sequestered in Kirk’s laundry room, quarantined as he may have been exposed to disease while on the streets.  Kirk transported him to veterinarian Dr. James Clark for an exam, fecal test, and a check of a mild leg injury.  The pup’s sweet and happy nature has unfolded, rewarding his savior.  The future is bright, and he will soon be in a loving home.

We need an army of rescuers in our community to respond to the current crisis for homeless animals.  Contact the Animal Rescue Center of California at (760) 877-7707 if you can foster a homeless pet.  Go to their website www.thearc-ca.org to adopt, donate, or volunteer.  LIKE their Facebook page “The Animal Rescue Center of California”.  Kirk and Noelle Geiger are truly the “Heart of Rescue”.