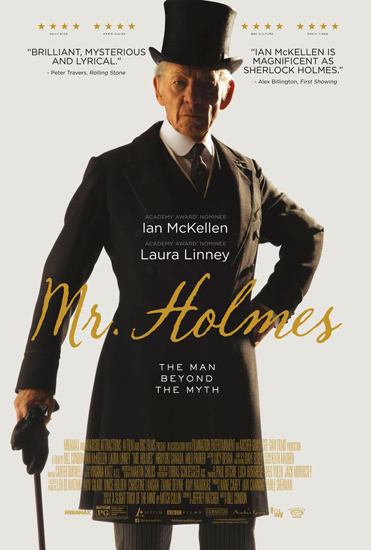 Ian McKellen, at age 77, plays a long retired, 93-year-old Sherlock Holmes in this delightful mystery drama about the man behind the famous detective.

It’s 1947. Holmes has just returned from a trip to Japan where he was looking for a rare healing plant and witnessed up-close the devastating aftermath of the atomic bomb. Back at is comfortable seaside cottage, he surrenders to living his final days tending his bees. Cared for by a housekeeper (Laura Linney) with a young son (Milo Parker), he contemplates the case that forced his retirement. His memory fading, Holmes relies on the assistance of his housekeeper’s son as he searches for closure to the persistent mysteries of life — and love – during the time that remains.

Ian McKellen is wonderful as the memory challenged detective haunted by an unresolved case that abruptly ended his professional life. Bill Condon, who revived McKellen’s career with GODS AND MONSTERS, directs with a sure hand. We see the old detective as a vulnerable human being who recoils at his pop-culture fame. (It made me think of Alec Guinness bristling at his “Star Wars” fame above all his other great roles.) I loved the relationship of the elderly detective and the boy.  Now playing and recommended. 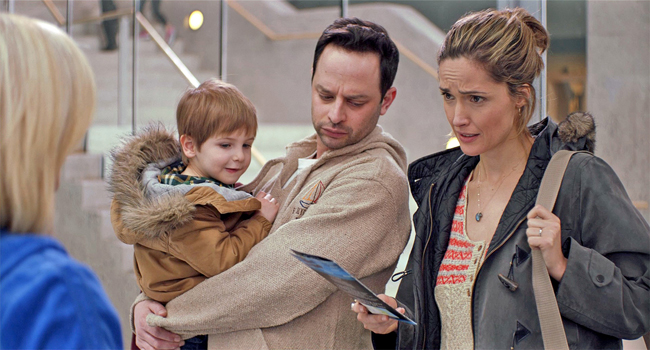 A well-made, fun story about a self-absorbed young hipster and failed entrepreneur (Nick Kroll) who crashes and burns on the eve of his company’s big launch. With his entire life in disarray, our beleaguered hero exits Manhattan and moves in with his estranged, pregnant sister (Rose Byrne) and brother-in-law (Bobby Cannavale) and becomes his 3-year-old nephew in the burbs – only to become their nanny. He finds a path to much needed personal growth but only after some rather bad behavior. I laughed and was strangely moved by this hipster dramedy nicely directed by Ross Katz from a story by Kroll.  Radius/Anchor Bay.  Blu-ray. 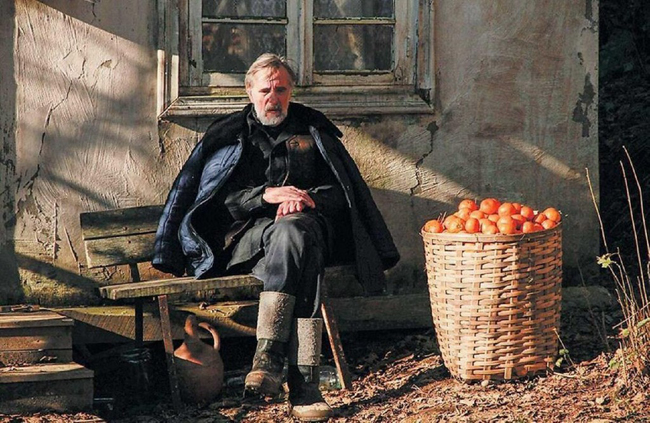 During the last PSIFF, TANGERINES was a sold-out hit. This impassioned film that’s set in the early 1990’s, just after the collapse of the Soviet Union, and during the protracted conflict between Georgia and Abkhazian separatists, transfixed me. Even though war is around them, two Estonian immigrant farmers choose to stay in Georgia just long enough to harvest their tangerine crop. One of the farmers, Ivo, takes in two badly wounded soldiers from opposing sides of the conflict. When the two soldiers vow to kill each other when they are strong enough to do so, the battle literally hits home.  However, during their recovery, we realize the two soldiers have an opportunity to rediscover their common humanity – or embolden their ethnic hostility. I loved this film and the beautiful, but sadly war-torn landscape in which the drama evolves. Movies like this have the power to remind us that we are finally one family and peace, even with our differences, is worth the effort. We can embrace that or not. A foreign language film Oscar© nominee this year. Directed by Zaza Urushadze. Recommended.  First Run.  DVD. 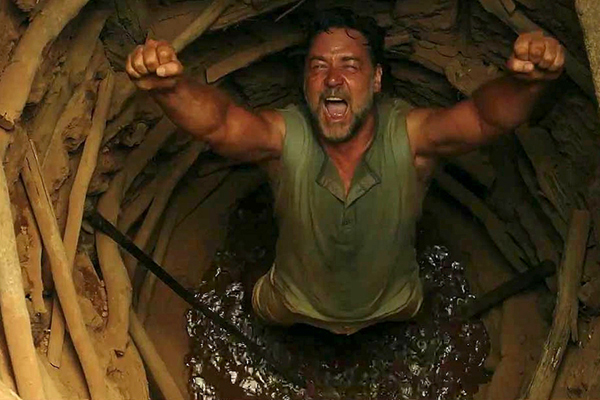 Set in 19191, Russell Crowe directs and stars in this epic action drama about Joseph Connor, an Australian farmer, who searches for his three missing sons, last known to have fought against the Turks in the bloody Battle of Gallipoli. Arriving in Istanbul, he finds himself suddenly thrust into a vastly different world where he encounters others who have suffered losses of their own in the conflict. Against seemingly insurmountable odds, he traverses the battle-ravaged landscape to find the truth. And perhaps most importantly – his own peace.  Warner Bros.  Blu-ray.