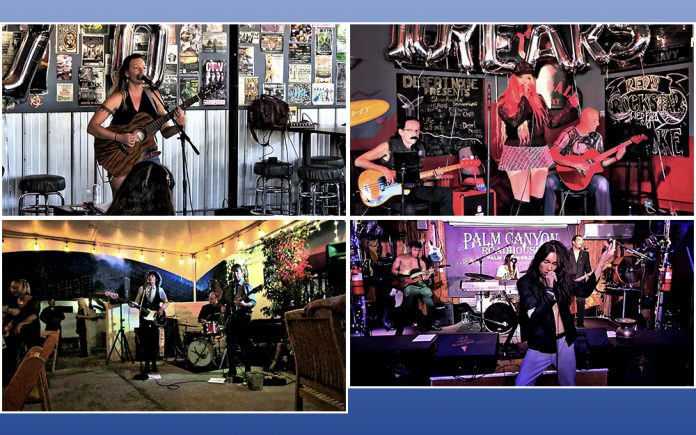 As Coachella Valley prepares for an anticipated busy fall season, venues throughout the desert region continues to offer live musical performances created by Coachella’s regional gifted musicians. When the official Covid-19 lockdown began back in March 2019, countless of working artists, bands, and entertainers were halted, leading a mass devastation that not just silenced our places of enjoyment, but the world. As Plato has quoted, “Music gives a soul to the universe, wings to the mind, flight to the imagination, and life to everything.” During the Labor Day weekend, Coachella Valley heals itself from the impact of Covid with the sound of music.

A Landmark of Music – Plan B Marks Their 10 Year Anniversary

The Plan B Bar, is known for their thrilling and sensational live shows, has recently celebrated their 10-year anniversary mark this past Labor Day weekend. The iconic music venue arranged a well diverse lineup from local songwriter soloists like Courtney Chambers, to the rocking powerhouse band, The Allies, all showcasing their talent. Plan B has always been a destination spot for many travelling patrons from outside the Inland Empire while making itself the home for local and touring musicians alike.

Saturday, September 4th, Plan B Bar powered up the amps and streamed their room with balloons in leu of this special celebration. Jeanette Krehbiel is the owner of Plan B who also happens to be a devoted music enthusiast, makes her way through her loyal regulars, sharing memories, and crazy stories her bar has had for all the years she owned it. Krehbiel’s party kicked off with local soloist and songwriter, Tim Anthony Scott on acoustic guitar, while drawing many of Plan B’s loyal patrons ranging from Coachella Valley biker groups to neighboring residents. As the celebration continues, the artists took turns from two different stage platforms, alternating each a half hour set. The anniversary celebration continued throughout the night with one of the most well-known karaoke shows in the Inland Empire, Red’s Rockstar Karaoke.

Expect Plan B to continue their successful run by looking out for any of their announcements for their upcoming exciting shows, or upcoming pool table tournaments through their Facebook page. If feeling needing to sing your heart out with some friends and a couple beverages, rock out with Red for his Red’s Rockstar Karaoke every Friday and Saturday night.

SaintSteelWood, a groovy Mod 60’s retro cover band, is becoming an admired local act, enticing more followers with each performance. In their most recent show at Indio’s popular hotspot, Tackroom Tavern, SaintSteelWood continued to steal the hearts of the venue’s audience through their trademark vintage sound. This was a pleasant surprise for Tackroom Tavern’s crowd that was expecting a light background dinner performance which now resulted in dancing, laughter, and a very special guest that would later on join in on the band’s set.

On this night, SaintSteelWood’s bass member, Woody Retro turned 69. The brilliant and charismatic multi-band musician is well-known for his extensive performances throughout the years, merging his talent with other local cover bands. While the aesthetically retro musician performs with his trio, he announced a special guest, Tony Ortiz from 1980’s San Diego based New Wave group, The Monroes, will be joining SaintSteelWood on stage.  The crowd excitedly cheered as Ortiz approached Woody while the band commenced the intro to “What Do All the People Know”- a popular Monroe’s hit and a San Diego favorite in 1982.

There was a special ambiance that filled the outdoor area that resonated joy between SaintSteelWood, Ortiz and their audience. This was an extraordinary moment for everyone who felt a kindred nostalgic emotion reminding everyone the joy music brought throughout the decades. Once again, SaintSteelWood along with Ortiz, resounded with their audience, creating another memorable experience with their fans.

For many years, The World-Famous Palm Canyon Roadhouse have never let us down when it comes to their thrilling and sensational live shows! Palm Canyon Roadhouse, or ‘The Roadhouse’, as coined by locals, has always been a favorite destination spot for musicians and vacationers and is known for hosting the desert’s most attractive live music performances of tribute shows, cover bands, touring acts, and jazz afternoons, and jam nights on Sundays. The Southern-Rock themed restaurant venue values patriotic holidays and has always provided sensational entertainment fit for dancers and spectators. For their Labor Day event, The Roadhouse brought one of the most well-known creative singer and songwriter, Krystofer Do, featuring his band: Razor J (guitar), Miguel Arballo (bass) and Sean Mccune (Drums).

Krystofer Do shows off lots of powerful vocal ranges, animated dance variations, and…well…skin. Krystofer Do and his band is known for adding a sex appeal attire, while blending their original music with high energy covers from Draft Punk, Queen, and Michael Jackson. Anyone who has seen Krystofer Do have become fans and always keep coming back for more of his captivating performance.  The tight knit band have always shared their passion for the musical arts that even the cast members of The Rocky Horror Picture Show, a Desert Rose Playhouse production, showed up to enjoy the spirited performance. Phylicia Manson and Rebecca Rodriguez recently directed the cult favorite under Desert Rose Playhouse productions and happened to be big supporters of Krystofer Do and his band.

Between the Rocky Horror Picture Show cast members, the historic environment of The Palm Canyon Roadhouse, with the spell bounding performances of Krystofer Do, the whole place revitalized with a lot dancing and singing with the band. Although, there wasn’t any time Time Warp that night, there was thrills, chills, mesh stockings, and heels. You can always expect the unexpected here when it comes to live music shows, but always anticipate the best and lively experience at The World-Famous Palm Canyon Roadhouse.

As Coachella Valley begins to show signs of healing, appreciation for the gifted musicians do stir among residential listeners and live music attendees, reminding listeners that sometimes, recovery begins to what we listen to, and the artist who created it. May we continue to show our support and always stop and listen to the music.