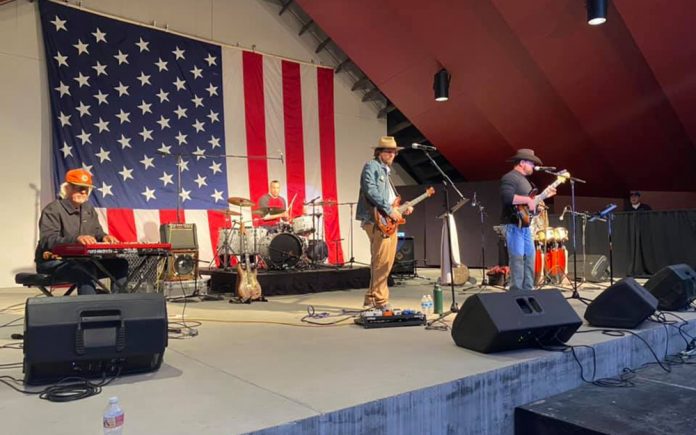 The Ghost Notes are not just a local favorite anymore.  With community support and the extraordinary talent of this Quartet consisting of Mike Hammons on Bass and Vocals, Damian Lautiero on Guitar and Vocals, Bobby Furgo on Violin and keyboard and Robert Peterson on percussions it’s no wonder the Ghost Notes are spreading their wings beyond the Coachella Valley. 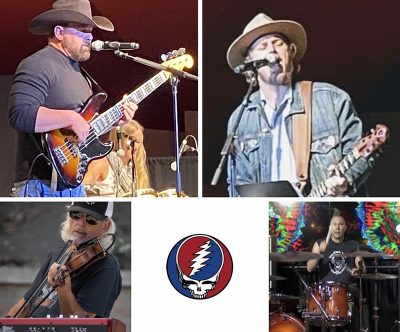 While I might be a bit biased, Mike Hammons, who is the heartbeat of the Ghost Notes has incredible passion and focus for his craft.  Even back in his younger days of Green Eggs and Hammons, we saw the fire was already burning strong.  He is a seasoned, experienced and well educated musician who has a strong understanding of business, relationships and the wants and needs of a venue hiring a band.  I recall earlier conversations with Hammons about his goals and dreams even before the band.  I personally witnessed Hammons waiting years patiently to form the Ghost Notes with just the precise musicians to be with him.  Enter… Damian Lautiero, Hammons partner, sounding board, idea man, devil’s advocate, true friend and wonderful musician who when together can cover a whole lot of ground in the business both internally and externally.  “We work hard to make our show a triple win, win, win for the audience, the venue and the band while building healthy business relationships that in some cases turn into incredible friendships.” With insight, diligence and humbleness, this has lead them to be a sought after band that people are drawn to anywhere they go.

The Ghost Notes are inspired by their fans, friends and family aka “The Ghost Heads” they understand that without them the show can’t go on and are clearly appreciative.  It’s the energy from the audience that inspires them to perform at their optimum and really go for it. “Sometimes for the better and sometimes for the worst, but always for the great good of the show. It will always be an adventure inspired by the crackling energy of four friends feeding off of their supportive audience,” Hammons adds. The Ghost Notes are present, prepared and ready to perform so their audience may have an experience to hold onto forever or at least until the next show.

Taking to cooler climate in the mountains this summer, The Ghost Notes were invited to perform at the Idyllwild Concerts Summer Series. Ken Dahleen, the concert promoter of twenty-two years, knew The Ghost Notes would be an ideal fit for the locals, visitors and music lovers in general.  Dahleen quickly recognized his intuition about the band was spot on when more than 1,200 concert goers were in attendance.  At the very end of the show feeling the overwhelming positive response from the audience Dahleen went on to say, “If the band could continue to play a bit more for the enthusiastic audience.”  The Ghost Notes obliged, “We happily played on and we were having so much fun we could have played all night long,” Hammons says.

With such an overwhelming response it’s no wonder The Ghost Notes may now be a local Idyllwild favorite too.  Hammons tells us, “About an hour after the show there was a standing ovation when Damian and I walked into Idyllwild Brewery for a drink winding down from it all.  We could not buy our own drink all night long, double fisted.  The people there were incredibly hospitable, gracious and kind and they made us feel really good.  The concert promoter Ken Dahleen has invited us back next summer to perform again and we are really looking forward to it.  Also, we made the front page of the Idyllwild Newspaper, so we could not be happier, thank you Idyllwild!”

The timing couldn’t be better for The Ghost Notes. People desire to hear from them because they have heart, soul and passion for the music they truly love to play which translates well to the hearts of the audience. Currently, they are pursuing several opportunities for shows in Pioneer Town, Yucca Valley, Big Bear and Idyllwild. A well-deserved applaud for The Ghost Notes who keep working hard, never give up and are truly there for the music and their fans. 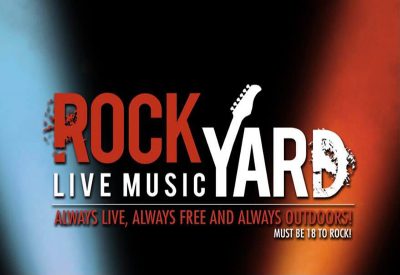 When and where can you enjoy an evening of meeting new people and supporting The Ghost Notes?  Be sure to come out to support the band,