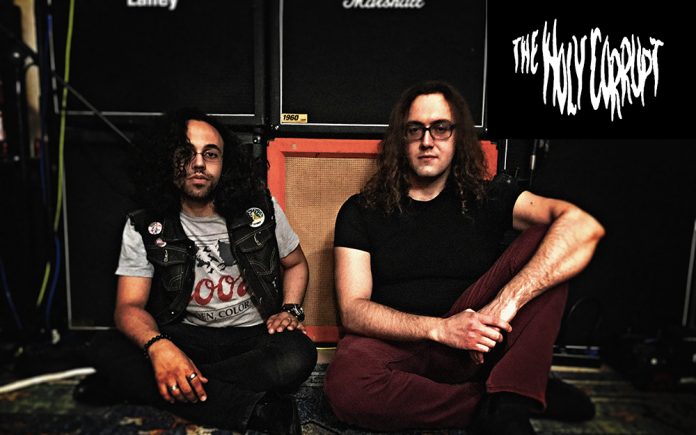 These days, it’s common knowledge that the Coachella Valley has a vibrant and diverse local music scene, and I have had the privilege over the years of covering musical acts that made the permanent move here for the specific reason of breaking into and being a part of our thriving community. This is the first time however, that I have met a band whose members moved here separately from the same place, just to end up meeting here and forming a band. 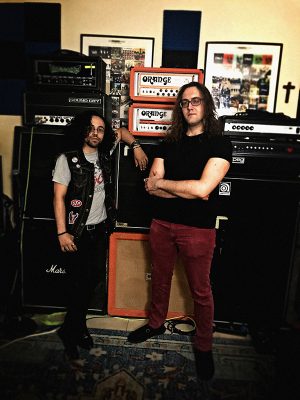 The Hold Corrupt is a Doom Metal duo, and both members happen to be transplants from New Jersey. Made up of Alex Gerber on drums and Donny Browne on guitar and vocals, these guys  have a specific sound and vision they have honed over years of being music lovers and creators and the fact that life brought them across the country to create their sound here is a treat for all those who love the low-desert sound.

I sat down with the guys in their studio space in Palm Desert to discuss their journey in music. Ours was a conversation that could have gone on for hours. Not just because the members of this band are both extremely interesting and intelligent people…they also happen to be two of the nicest dudes you might ever have the privilege of meeting.

CVW: So Donny, you said you moved out here first in 2014. Did you have any ideas or knowledge regarding the desert music scene before you came?

Browne: “Vaguely. In the late 90s and early 2000s I started really getting into heavy stuff. I started playing guitar around 1999/2000 and really leaned towards wanting to play heavy stuff myself. Somewhere around 2001 is when I discovered Queens of the Stone Age, Songs for the Deaf. That was when MTV was still playing videos so I was able to discover those guys which led to discovering bands like Kyuss, Fu Manchu, Mondo Generator….”

Alex Interrupts: “God they are so good!”

Browne: (laughing) “I know. All I really knew is that these bands that I had learned to love came from the, ‘California desert.’ But, I also knew there was a lot of desert in California, so it was really kind of a happy accident that I ended up in this place.”

CVW: Alex, how about you? 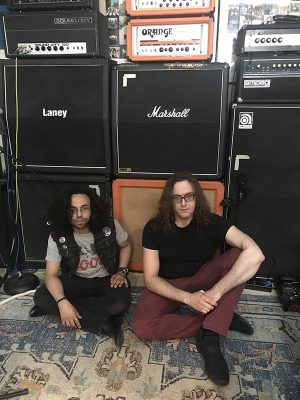 Gerber: “I moved here in mid-2015. In April of that year I was just about to graduate from Carnegie Mellon. I had my degree and my minor all lined up and one day I started meditating. I had a vision and was like, ‘I need to move to the desert.’ Don’t ask me why, the desert of all places. So I ended up telling my mom that I’m moving to Palm Springs. And she said, ‘Great! We wanted to retire there anyway.’”

Gerber continues: “I sort of had an idea of the music scene out here. It wasn’t exactly what I expected but I wasn’t shocked by anything. I grew up listening to classic rock and funk and started playing drums along with my grandad’s vinyl collection. Eventually I was playing Tony Hawk’s Underground on XBox and, “California Crossing” by Fu Manchu came on and I was like, ‘What is this magic?! This is one of the greatest rock & roll songs I’ve ever heard!’ Which led me to search the internet. I own all of their albums now…obviously. But that was definitely the beginning of so much change for me. Of course from there I found Kyuss and the rest is history.”

You can find the Unholy Corrupt on all major platforms. Follow them to find out about one of their many, upcoming performances.