Again, Palm Springs basks in the spotlight of its International Film Festival whose popularity and attendance puts it at one of the top three film fests in our nation.  Congratulations town!

Many of you long-time CV Weekly readers, will remember that this column has joined in the fanfare itself by presenting some hopefully interesting wine & movie pairings, where we’ve—well, matched some festival films to particular wines because of some serious or crazed connection to one another.  And we’ve had our fun—perhaps at your expense; fortunately last year I pretty much promised to put any more ideas to a restful sleep.  (For you insomniacs, you can check out the craft involved, online in the CV Weekly archives, January articles of the past.)

For this 2016 celluloid celebration, why don’t we simply reminisce on some of our favorite movies where a bottle of wine, or, some vineyard here or there plays a noticeable part or even its own “character” in the film.

Of course one of the movies at the top of the heap is Sideways (2004). Every wine columnist and movie critic has written about it.  Perhaps the best wine tasting movie ever made—so far—filmed in the bucolic setting of the Santa Barbara wine country, along with a charming, thoughtful and oftentimes funny story that also contains a couple of the fifty-ways-to-leave-your-lover scenes. 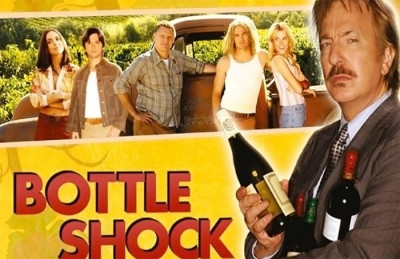 Bottleshock (2008) is also a favorite of wine enthusiasts who love to relive the story and the time when California wine finally met up with their envied French counterparts at the 1976 Judgment in Paris. No spoiler-alerts here, just open a bottle and enjoy the flick.

Movie enthusiasts will well remember the 1969 classic, The Secret of Santa Vittoria, directed by Stanley Kramer and starring Anthony Quinn, Virna Lisi, and Sergio Franchi.  It’s about an Italian town that works to hide a million bottles of wine from the advancing German army.  Vincent Canby wrote, “this film has a picturesque family along with old lovers, new lovers, bad Germans, good Germans, crazy priests, plazas, blue skies and rainy ones”.

Now if you wish to quaff a serious wine to some serious wine documentaries, well made and interesting, look for the 2004 Mondovino (Italian: World of wine).  Controversial at the time for its mocking nature of serious wine characters such as Michael Rolland, Robert Parker, and Robert Mondavi.  Generally about the “globalization” of the wine biz, it’s for those so inclined to in fact watch it!  The director’s cut is about 10 hours, so forget a bottle of wine but rather bring a case.

Maybe a more up-to-date look at the wine biz, check out the 2013 Somm. Definitely for the enthusiast who can sympathize with some young turks that are attempting to succeed at the prestigious and most difficult Master of Wine examination.  It’s rough and tumble times for these applicants and the story keeps you in the mix by taking the viewer on a humorous, emotional and illuminating look into a mysterious world—The Court of Master Sommeliers.  (Viewing this may explain why I wittingly title myself as CV Weekly’s “somm-about-town”—or maybe not!) 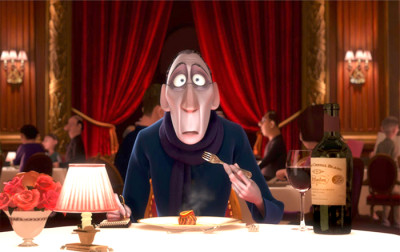 Movies that don’t necessarily dwell on wine, but when it shows up in a film shot, it can often add flavor to or even make the scene; it’s always appreciated by us vino lovers, such as the ‘61 Latour and the ‘47 Cheval Blanc in the delightful animated film, Ratatouille.

Decanter Magazine (Britain’s Wine Spectator of sorts) recently chimed in on individual wines that have been featured on the big screen that include Chateau Margaux in Withnail & I and Sherlock Holmes, Chateau Latour in Monty Python’s Meaning of Life, Chateau Angelus in the James Bond Casino Royale and Veuve Clicquot in Casablanca.

Francophiles, movie lovers and wine enthusiasts all seem to love the acting and the story in the 1996 romance comedy, French Kiss.  Kevin Kline and Meg Ryan keep the fun sexual energy going as they traipse around Paris, French wine country and eventually land in Monte Carlo. And it all revolves around protecting one little grape vine—and of course, l’amour.

Some of my favorite wine scenes are in the James Bond movies—as it should be!  After all, we’re talking class, elegance, and perspicacity.  I continually remember early on when Sean Connery’s Bond would always order up a1954 Champagne.  And rightly so—1954 was a stellar vintage year for Champagne. 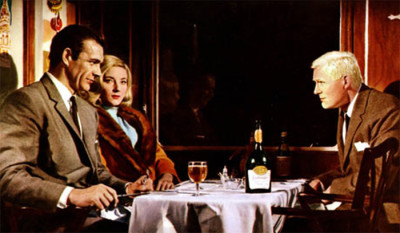 In the razor-sharp briskly paced Cold War thriller, the second James Bond movie, From Russia with Love, has an excellent scene where Bond is aboard the Orient Express and in the dining car with his recently rescued Bond-girl.  Also sitting across from them at the table is the “false” British agent who does a great job selling his position until he commits a major faux pas.  When asked what wine he wished to have with his fish, he calmly replies, “I’ll have a glass of Chianti”.  Bond is immediately put on notice: no self-respecting representative in Her Majesty’s Secret Service would ever pair that wine to fish.

In a later Bond movie, Sir James was on a cruise ship with, again, a rescued Bond-girl.  Two Master Chefs personally served the couple with a fantastic meal and also provided a 1968 magnum of Champagne.  The chefs can’t keep quiet but over-praise and tout the quality of the bottle.  Unfortunately for them, Bond is well aware that the 1968 vintage was a wash-out, so he is again put on sufficient notice.  I think he went on to whack one of the chefs on the head with that same huge thick bottle.

Time to cozy up with some dark chocolate, popcorn, a nice bottle of wine, and your favorite movie.   Ta-dit-ta-dit-ta-dit—that’s all folks!