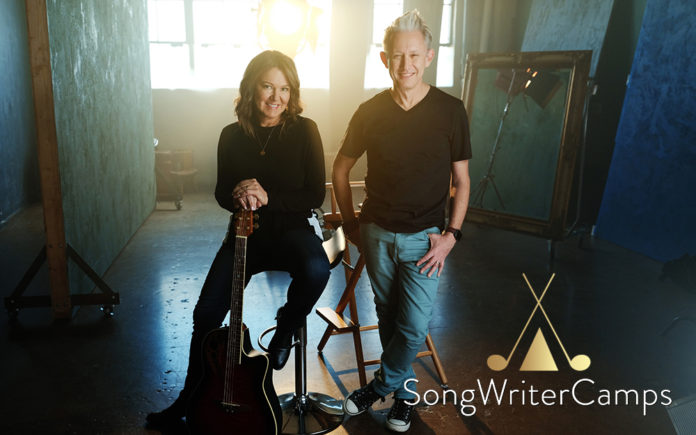 The right song has a way of entering your ears, reverberating in your mind, and reaching your heart in ways that very few other things can. We love lyrics that cleverly express what we couldn’t verbalize ourselves, especially when set to a beautiful melody or catchy beat. When you look behind the curtains of the magic that is music, you find songwriters. These architects of words and verse find the perfect turn of phrase to make hit songs what they are. Many people are born with this talent, but soon find out that there’s so much more involved in songwriting as a career. For those looking to turn their passion into their livelihood, they have the opportunity to learn from the best. From May 13-16 at the Ace Hotel, veteran songwriters, Pam Sheyne and Richard Harris, hold their second songwriting workshop in Palm Springs, SongWriter Camps.

To give you an idea of their credentials, both Richard and Pam are working songwriters who have been in the business for over twenty-five years, often collaborating with each other (and having done so since early on in their careers). Pam Sheyne is known for penning songs for such artists as Camila Cabello, Corrine Bailey Rae, Demi Lovato, Jessica Simpson, Seal, Sinead O’Connor, and the Backstreet Boys, to name only a few. She got her first big break when she co-wrote the #1 Billboard hit, “Genie In a Bottle” (sung by Christina Aguilera). In addition to being a multi-platinum songwriter, Pam is also a producer, singer, and mentor. Singing, in fact, is how she started out in the music business. Said Sheyne, “I was a singer from New Zealand and I moved to London for 28 years and worked as a session singer/backup singer for different artists. I didn’t see the longevity in that and got into songwriting. I had some songs placed and grew to really feel it was my greatest passion in life. I started traveling internationally, building a network of people to write with. My hard work paid off and I was really lucky enough to be introduced to two guys who I wrote “Genie In A Bottle” with. It was the first song we’d ever written together and was on a shoestring budget. It was great timing as far as Christina was concerned – she had her album ready but needed her first single. We pitched it to her, she loved it and recorded it. The rest is history.”

Richard Harris is a #1 Billboard songwriter, producer, artist, and mentor. Among his many accomplishments are multiple #1 hits, top ten singles, and platinum records. Richard has also landed hundreds of TV, film and ad song placements. Among the highlights are hit shows including “Empire,” “Nashville,” “Vanderpump Rules,” “Cold Case,” and “One Tree Hill,” movies “This Means War” and “Single Moms Club” and commercials for eBay and Vivo. Perhaps equal to his passion for songwriting is his passion for mentoring. Over the years, he has helped numerous artists and writers hone their craft and find success with their music. When she was starting out, Meghan Trainor was one of the writers that Richard helped guide until she signed her first publishing deal.

Although this is their second time running their camp, Pam and Richard have worked and mentored at many songwriting festivals and workshops before deciding last fall to start one of their own and now plan to do two a year. With a total of 30 spots, keeping the camp small enough for each attendee to get individual attention, there are still a handful of spots available to aspiring songwriters. Sessions at the camp are a great opportunity to collaborate, as people are put into groups according to their skills. In addition to master classes, songwriters are given a brief, charged with writing and song and then performing it after dinner on one night of the camp. More so than simply writing lyrics, there is a lot to learn when becoming a songwriter – how many songs to send in and etiquette with record companies, being just a few aspects. Aside from Pam and Richard, there are 6-8 other mentors, consisting of producers, songwriters, business mentors such as A&R people, managers of artists, and record company employees who mentor on next steps and how to get into the industry. They are all successful people in their own right. Among the mentors is Esjay Jones, a local musician by way of South Africa. Pam describes the experience as “Totally immersive for aspiring artists and songwriters to get better at their craft. The mentors interact with the songwriters all night and have dinner with everyone. They give invaluable firsthand advice and a feel for industry. It’s great for forming a relationship and building a network.”

To apply for one of the remaining spots in the May 13-16 camp or to learn more information, go to https://www.songwritercamps.com/