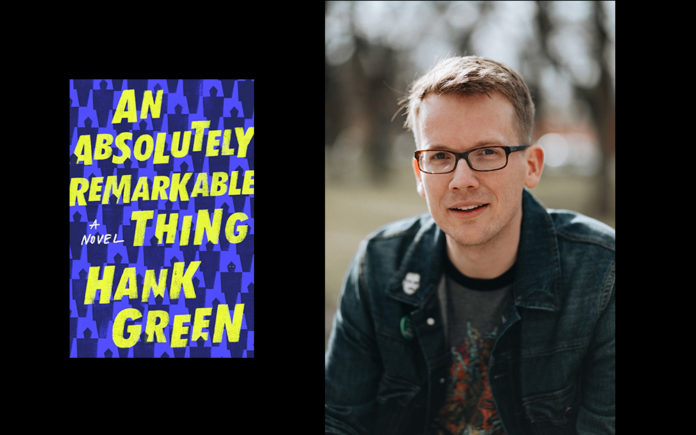 What would an extraterrestrial visit to this planet look like and what would be their mission? In Hank Green’s An Absolutely Remarkable Thing (Dutton, 343 pages) aliens are motivated to help earthlings, but humans may be beyond help.

The story is told by its protagonist April May, a 23-year-old art college graduate living in New York.  At three in the morning, April finds herself taking the wrong subway home and stumbles into a giant robot sculpture.  This art installation seems like a perfect opportunity to make a viral video.

April calls her college chum Andy who comes to the “robot” site with all his video equipment. April being an art school grad, decides she’s perfect to narrate on the video.  All in good fun, she touches and admires the big inanimate lug giving him the name Carl.

When they’re finished taping, Andy goes home to post the material on YouTube and April goes home to sleep.  While April snoozed, the video not only went viral with millions of hits, it went global.  Now, the whole world is talking about Carl!

Turns out, there are many “Carls” in major cities across the planet and no one seems to know anything about them.  In the video, April is seen as the first to make contact with the mysterious robot installation.  No artists have come forward to claim the art piece, and city governments have no idea how – or why — the robots were set in place.

Through the online community, April and Andy find out that all the Carls appeared at the same time.  When surveillance camera footage is checked to see who positioned the Carls, an apparent electromagnetic pulse damaged all the images leaving only white noise.

There are also strange clues like Queens “Don’t Stop Me Now” playing behind the “snow.”  April, Andy, the folks on the Internet and social media followers try to figure out the mystery of the Carls.

Meanwhile, Andy’s Hollywood lawyer father has arranged meetings and found the two an agent to manage the popular phenomenon – not Carl – but the wealth and fame that often comes with a viral video.

April and Andy use their art school skills to rebrand and better market themselves and their product — Carl.  Money is rolling in and so are the comments.  The cyber world is taking sides as Carl proves to be more alien that art.

This is Green’s debut novel.  Green is well known in the cyber world.  He was an early leader on YouTube and capitalized with online content and sales. His production company has an educational arm that creates science videos.

Merging his interests and experience, the author reveals the great big world that exists in cyber space and the challenges and opportunities it creates.

April and Andy are swept into the frenzy that is generated through social media and online sites. Their appearance on talk shows only throws fuel on the flames.  Which in turn, makes them more money.  Soon, April becomes the spokesperson for Carl, and it generates not only fame and fortune, but also death threats.

In the novel, April narrates her story as part of her book deal.  I found her immaturity and millennial self-importance –“I’m special” — is often very annoying.  She uses “dude” and is not very insightful or bright.  She wants to make an impact on the world but can’t figure out how.

Carl is her opportunity and she goes all in without thinking beyond the money.  But, hey, student loans are outrageous and the idea of paying off the high-interest debt is paramount to making ends meet.

When it becomes clear that Carl is not from this earth, April is the alien’s chosen representative, and she is in over her head.  Why the aliens chose April is never made clear.  April wants to contribute something positive, deliver an uplifting message, say something important, but picking a fight with haters gets more “likes.”  The cyber community debates whether April is a traitor or a peacekeeper to humanity.  Even April is unsure.

At times the narrative is convoluted and goofy.  Its humor and snarky attitude usurps the serious issues and makes the millennials out to be weak and ineffectual adults rather than resourceful and innovative.

There are several themes in this book that are timely.

But, I kept wondering what author Green’s story was really about.  Is he reminding readers how “social internet” can quickly distort information and alter perceptions?  Is the book a lesson on how to profit from anomalous postings, develop your brand or participate in social change?

We now know the whole world can participate in one conversation without a total understanding, a big picture view, or rational guidance.  It is not the alien robots that are the monsters; it’s the fear they generate.  But, fear is good business.