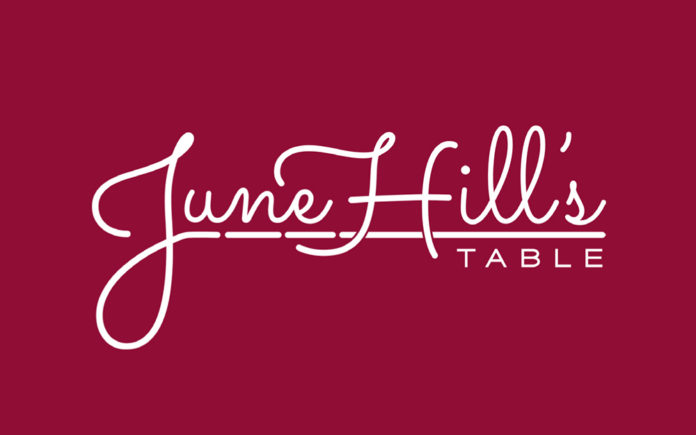 The East Valley has a sparkling jewel in their crown of restaurants. June Hill’s Table sits unassumingly off 52nd in Indio at the Trilogy Polo Club, harboring a stunning views, stylish ambience and tremendous food. 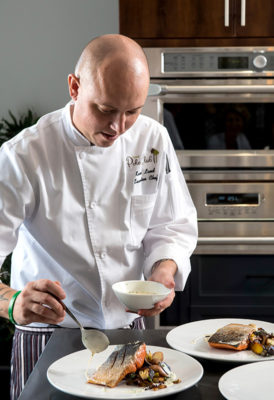 When driving out to June Hill’s Table at Trilogy Polo Club in Indio, it might seem like it is a bit out of the way. But its slight remoteness is actually part of what makes it so special. The distance makes it a destination location, and the views…well, are spectacular. June Hill’s Table is visible before you even enter the Trilogy Polo Club. The building where the restaurant resides also serves as the clubhouse. The triangular white canopies are inviting and bring a feel of recreational grandeur to the resort style core of the club. Having the restaurant so close to the entrance is a benefit for diners, as the sometimes long maze that some other country clubs have to get to their clubhouses can be tiresome, but is absent from Trilogy.

Although Trilogy is a 55 an older community, June Hill’s Table is open to the public. Only opened for a little more than a year, the restaurant has received high acclaim. As I sat down in the fabulously designed dining room with restaurant manager Raymond Cooper, I asked him to explain the choice of the name for the restaurant. He expounded on the motivation, highlighting that they wanted to bring a bit of valley history into the restaurant, more specifically, Indio history. They came across Dr. June Hill McCarroll, who was one of our many women pioneers in the Coachella Valley (and yes, woman seriously helped shape our valley).

One of McCarroll’s prime accomplishments, besides being a much needed physician in the desert back in the early 1900’s, was that she was credited with being the person who came up with making centered highway markings, to provide safe driving practices. Her idea to draw on the road came from her own experience of almost colliding with another vehicle while driving on what is now, Indio Boulevard. After trying to get the local government to put her idea into motion without success, she circumvented their inaction, and literally painted dash lines on the road herself. Through many years of campaigning for the road safety lines to be adopted, it finally was in the 1920’s, and then later worldwide. 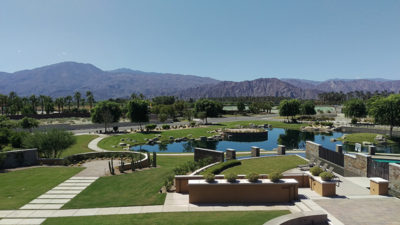 Beyond the lively drinks is their fantastic food at June Hill’s Table. The menu is supported by their goal to offer locally sourced farm to table ingredients, which makes a huge difference. Chef Kevin Land insures that the ingredients are utilized to their upmost potential by making menu items all from scratch (with the exception of their bread which comes from a local purveyor). Once you bite into anything that comes out of Lands kitchen, the taste of his efforts are greatly noticeable, and appreciated.

Upon being seated, I was brought a basket of freshly fried potato chips, served with house made Blue Cheese dressing for dipping, their version of bread and butter. Something I noticed right away was that the chips came out hot and fresh! In no way was there an inkling that those chips were hanging around a heat lamp. It was as if they were just waiting for me to get there, to voluntarily jump into hot oil and then toss themselves in garlic infused olive oil, with a dash of salt and pepper. Presenting submissively in a paper lined basket with a side of cool Blue Cheese dressing. Yes, they were that good…a little too good, bordering on evil. 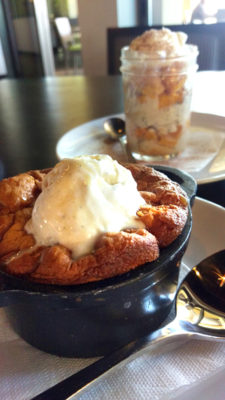 To get a taste of different items, Cooper put together a sampler plate for me. The plate had their new Spicy (and sweet) Buffalo Wing’s, which they recently introduced for football season, a BBQ St. Louis Rib, Crispy Brussel Sprouts, Bosc Pear Bruschetta and Shrimp with Ravioli. My review will go down the line, starting with the Buffalo Wing. Of course they use cage free chicken, which comes through in the flavor and the meatiness of the wing. Although the wing had some defined heat, is was sweetly balanced by the mix of honey in the sauce. Next up was the BBQ rib, with its supple chipotle sauce, and tender meat, it was actually lite in texture, absent of that heavy BBQ taste that sometimes accompany ribs.

Then came the Brussels. Oh my, oh my, those Brussel Sprouts were phenomenal! For those of you who have sworn off this veggie, please give these little guys another chance. They are not your moms Brussels. These Brussels were on the crispy side, tossed with heirloom cherry tomatoes, an aged balsamic reduction, parmesan cheese and crispy garlic. The element of the tomatoes with the Brussels completely cut the natural bitterness of the veggie that could scare away any would be Brussel fan. It was like veggie candy. If I could, I would hand them out for Halloween.

I went for the Bruschetta after the sprouts, still wanting to dive back into my green dish of deliciousness. But the Bruschetta was wonderfully smooth, with creamy herbed goat cheese, candied pecans, crispy sage, and roasted Bosc Pear, all on grilled ciabatta. The final item on the plate was the Shrimp and Ravioli. This is one of their signature dishes. The house made ravioli filled with Vadouvan roasted carrots, was served with a sweet basil and sugar snap pea coulis and a pan seared shrimp. The ravioli was so velvety, and with the carrot filling, it was almost like dessert. Amazing!

And speaking of dessert, they brought some out for me to taste….oh the sacrifice. Staring me in the face were my weight adversaries. There was a Caramelized Apple Cobbler, all cozy in a single portion cask iron pot, and, get this, a Pumpkin Tiramisu. What?? Yes, they went there, all part of their fall inspired menu. The cobbler was piping hot and served with a scoop of Tahitian Vanilla Gelato, which melted lovingly into the cobbler. The bottom of the cobbler housed the caramelized apple and spice goodness. I repeatedly dove into the cobbler, and surfaced my spoon to acquire just enough gelato to gently accent and cool the submersed filling. It was an eye roller to say the least.

The Pumpkin Tiramisu was on planet of its own. Portioned clouds of pumpkin spiced mouse, alternated with espresso cream, with lady fingers kissed with drizzles of Rum and Rumchata sprinkled with cinnamon…ridiculous! Needless to say, my dessert adversaries got the best of me.

June Hills Table changes up their menu every 90 days, to reflect seasonal ingredients. Their menu is the same for lunch and dinner. Offering items from salads, to sandwiches, seafood, steak and appetizing appetizers. They are opened Wed through Sunday, and offer Happy Hour every day from 2pm to 6pm, except for Sundays. On Sunday’s they offer a Brunch menu from 10am to 3pm, with Bottomless Mimosa’s for only $6. For the quality of the food and ambience, their prices are surprisingly moderate. In addition to their main dining area, there is gorgeous outdoor seating on their patio. They also have an upstairs banquet room for private parties with considerably stunning views of the Santa Rosa Mountain’s.

June Hill’s Table is a bright and shiny addition to the East Valley food scene. It is up there with the best of the best, incorporating everything and more of what makes a dining experience memorable. I look forward to taking a seat again, at June Hill’s Table.