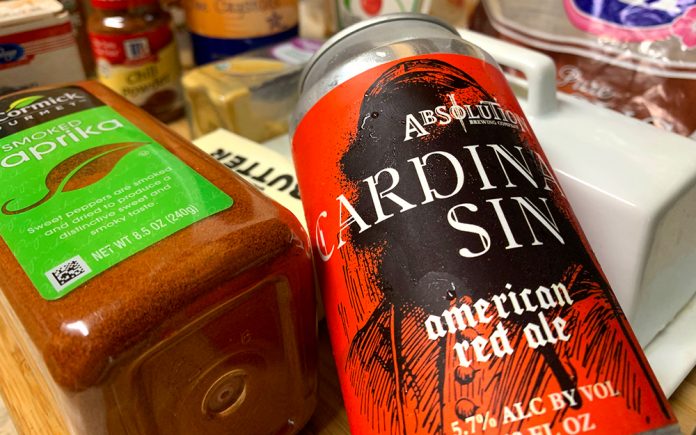 For thousands of years, the process of basting has been used to enhance flavors during cooking. Basting is a technique that’s used in grilling, baking, roasting, and other methods of cooking where meat is left over heat for extended periods of time. While modern cooking science has proven that improper basting can actually lead to drying out your food instead of moistening it, backyard pit-masters and home-cook chefs aren’t ready to cut the technique out of their repertoire entirely. We may have given up basting our turkeys, but we’ll never give up basting our ribs in barbecue sauce. 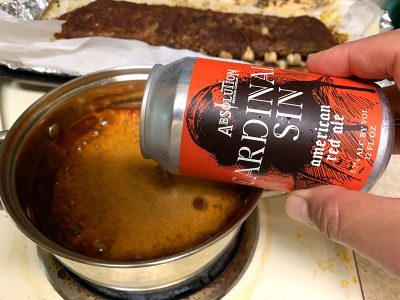 Grilling enthusiasts all have their favorite national brands of barbecue sauce, with brands like Sweet Baby Ray’s and KC Masterpiece selling millions of units every year. While some brands are little more than sweet, smoky ketchup, there are some fantastic grocery store sauces to be had. Because they are mass produced, most national barbecue sauces will contain preservatives and stabilizers to ensure a long shelf life, and none of them are going to be made with beer. Well, that’s not entirely true. Breweries like Yuengling, Mendocino Brewing, and Stone have all expanded their portfolios to include BBQ sauces made with IPAs, Imperial Stouts, and Red Ales. If you don’t mind paying $7 for a 14 oz bottle of the stuff, Stone’s Tangerine Express IPA sauce sounds pretty tasty. But if you’ve already gone through the trouble to smoke your own racks of ribs, it’d give you even more satisfaction to put together your own sauce using ingredients you might already have in your kitchen.

Some may choose to split hairs over it, but red and amber ales are the same thing. According to the Beer Judge Certification Program, or BJCP, amber ales are “a modern craft beer style developed as a variation from American pale ales. Known simply as Red Ales in some regions, these beers were popularized in the hop-loving Northern California and Pacific Northwest areas before spreading nationwide.  It’s a hoppy, moderate strength beer with caramel malty flavor; darker, more body, and generally less bitter than American Pale ales.”

Killian’s Irish Red ale is available in most grocery stores as it’s made by MillerCoors and enjoys vast distribution. I recommend a version as it will have a deeper, more intense character than Killian’s has. For this recipe, I chose Absolution Brewing’s “Cardinal Sin”, a 5.7% and 37 IBU red ale that exhibits sweet notes of caramel and toffee; flavors that absolutely compliment the smoky, rich flavors of grilled meat. Amber lagers will work just as well for this application. In any case, we’re going to reduce it and amplify its flavor, so choose something you enjoy drinking.

I’ve made barbecue sauces from scratch, but this quick and easy “cheat” version is just as tasty as anything I’ve put together. A touch of cinnamons adds a warm, savory spice and tons of character, while just a bit of cayenne adds just the right amount of heat. This recipe is based on the Kansas City style of barbecue sauce; sweet, brown, tangy and thick.

This is a finishing sauce, used to baste your chicken or ribs after it’s most of the way cooked, and allowed to caramelize and form a sticky glaze over your roasted meat. It also makes a fantastic dipping sauce for chicken strips or whatever else you want coated in the best red ale barbecue sauce ever.

Salt and pepper to taste 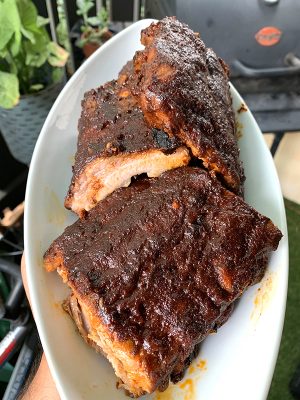 In a medium sized saucepan combine all ingredients and bring to a boil, stirring. Reduce heat to low, and simmer for 15-20 minutes, stirring occasionally. Cook until sauce has reduced and thickened. Remove from heat and use immediately or pour into a heat safe container (mason jars work well for this).

This will keep in the refrigerator for at least 2 weeks and probably even longer.