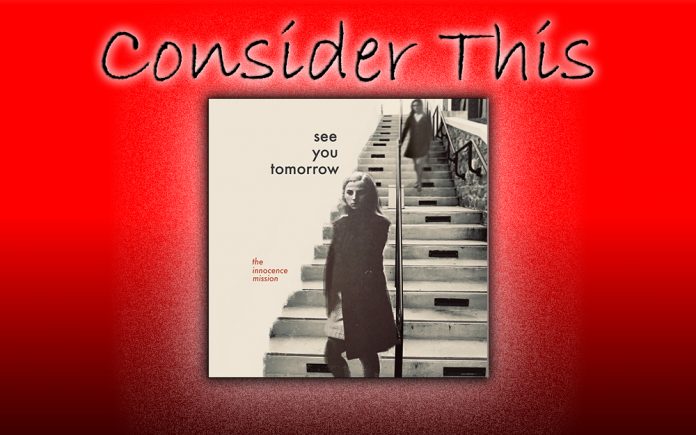 nos*tal*gia (noun) a sentimental longing or wistful affection for the past, typically for a period or place with happy associations

The term “nostalgia” comes from the Greek (but of course), it’s the combination of two words, nostos meaning homecoming and algos a Homeric word meaning “pain”or “ache.” In a penultimate “Mad Men” episode, Don Draper refers to it as “a twinge from your heart far more powerful than memory alone.” That is how I feel whenever I listen to the innocence mission. There’s an ache in my heart that makes me feel equally happy and sad.

the innocence mission (they keep it low key and lower case) has been a going concern for over 30 years. Karen Perris (ne’ McCulloch) grew up in Lancaster, Pa. and heard plenty of Beatles and Simon & Garfunkel as a kid, but when she heard Judy Collins’ version of Joni Mitchell’s “Both Sides Now” on the radio, she knew she wanted to be a musician. She received her first guitar for her 10th birthday.

Fast forward a few years to high school and Karen was performing in a school production of “Godspell.” It was there that she met bassist Mike Bitts, drummer Steve Brown and guitarist (and future husband) Don Perris. Soon enough they had formed the innocence mission. After a few years of paying dues, they signed with A&M Records. Their self-titled debut arrived in 1989. Ironically, it was produced by bassist/producer Larry Klein, who was (at that point) best known as Joni Mitchell’s husband.

Critical acclaim was nearly unanimous, the band’s gossamer sound lingered in the ether somewhere between like-minded artists such as 10,000 Maniacs, Suzanne Vega and Opal and presaged upcoming bands like the story, Mazzy Star and the Sundays. Sales were respectable, buoyed by stint as opening act for Don Henley. The innocence mission quickly followed with two more quiescent charmers, 1991’s Umbrella and 1995’s Glow. The latter featured their break-out hit, “Bright As Yellow,” which had a prominent place on the soundtrack for the indie film, “Empire Records.”

By the turn of the 20th century the band had pared down to a trio, Mike Brown having quit to pursue a culinary career. They’d also split A&M Records once it was subsumed in a giant corporate merger. Their fourth effort, Birds Of My Neighborhood was equally amazing, and released via the tiny Kneeling Elephant label.

The following year, the trio discreetly reaffirmed their Catholic faith by self-releasing an EP of hymns entitled Christ Is My Hope. All the proceeds went directly to hunger relief charities. The only original song was the sprightly title track.

For the next decade Don and Karen mostly concentrated on raising a family. They quit touring, but continued recording, albeit sporadically. Still, the results remained brilliant on albums like Small Planes (2001) and Befriended (2003). A year later, music and family intertwined with the release of Now This Day Is Over, a collection of standards and lullabies that included a sublime version of Henry Mancini’s “Moon River,” which had long been a staple of their live show.

Between 2007 and 2018 they released four more albums, 2007’s We Walked In Song, 2010’s My Room In The Trees, 2015’s Hello I Feel The Same and 2018’s Sun On The Square. Karen also recorded a solo EP in 2012 and Don somehow found time to release a clutch of (mostly) instrumental solo albums. Now they have returned with their 12th long-player, see you tomorrow.

The record opens gingerly with “The Brothers Williams Said.” On the first verse, downcast piano chords are matched by Karen’s tremulous vocals, rather quickly, the piano notes accelerate, enveloped by shimmering guitars, liquid strings and an off-kilter thump. Tender lyrics offer comfort and reassurance to a bashful child; “The brothers Williams said you don’t even talk, I know you best, I see you shine/A million stars out in a very dark night, brilliant tourmaline, gold and copper light, don’t pay attention to them, ok? Tomorrow, today, today, tomorrow, see you tomorrow.” The instrumentation swells to crescendo before a wistful piano coda brings the song to a close.

The world that the innocence mission seems to inhabit sometimes feels preserved in amber. It’s a place where riding bikes, flying kites, building sandcastles, watching the seasons change and reading books are cause for celebration. There’s a painterly quality to both “St. Francis And The Future” and “John As Well.” On the former prickly acoustic guitars dovetail with lilting accordion and a wash of Mellotron. There’s a pointillist appeal to lyrics like “And in the background of St. Francis there were rivers, spires a long way off, we could not really see them very well/I want to be beside you through all these things. Cannot. I want to keep this future from such close measure. Cannot very well.”

The latter blurs delicate piano notes, fluttery guitar arpeggios and lush accordion. The enigmatic lyrics speak to the limits of language, the passage of time is signaled in mile markers; “And the symphony in the park and the lawn chairs, and the moving van, and the first day of the school year in the distance, and the wedding banns.”

The melancholy “Movie” is awash in cinematic instrumentation, propulsive piano chords are matched by willowy guitars and winding melodica, all in ¾ time. Lyrics act as a spiritual travelogue offering flashing imagery; “California windmills, let the arms move the other way, turn around the days, if we could be returned in the heart, remade in the heart, and returned in the day/Notice the air is wonderous, with all the weather, the possible light and the streets to reach, and you are here, and we have just only arrived.” As churchy piano notes gather speed atop swirly guitar on the break, there’s a sense of longing just beneath the surface, that can’t be contained by the cool, calm words collected herein.

Don takes the lead on “Mary Margaret In Mid-Air.” Jangly guitars phase and shiver. The lyrics offer a tender encomium to his own mother; “My mother in her teens, had a joy for all to see, brought her boy up to believe, sings ‘I love you, pass it on.” Karen’s beatific harmonies brush up slightly behind each verse. Stately piano and typewriter-y percussion underscores the grief that never quite diminishes following the loss of a parent.

Other interesting tracks include “At Lake Maureen” which fuses dour piano and rippling guitars. Lyrics recall halcyon days that were sweet, but fleeting; “Make my soul come clean, a sail above Lake Maureen, sing into the storms, sing into the storms, this day is going.” Meanwhile, sun-dappled guitars wrap around fragile piano fills, serpentine strings, wheezy harmonica and thundering timpani on “This Boat.” Lyrics like “What was wrong has never been your fault” offer cryptic consolation.

The record winds down on the final two tracks. “Stars That Fall Away From Us” taps into that feeling of desolation that has gripped everyone at one time or another. Cascading guitars twinkle and glow, latticing over Mellotron, melodica, accordion and pump organ. Karen and Don’s vocals knit together on the second verse, diffident and confidential; “Far away, looking out for a way back, loneliness is the star that we all see/Mostly we don’t shout it out, it’s a secret, almost never at all.”

Finally, there’s something ecclesiastic and joyful about “I Would Be There.” It unfurls slowly, all shuddery keys and lanky guitars, before it all coalesces around wistful melodica, burnished bass and a surprisingly slinky beat. The lyrics offer a hesitant declaration of independence; “And now, I won’t be turned around, by the long detour, fear or the fear of the fear, or the revolving door.” It’s a sunny finish to another great album.

These are desperate days. For the first time in a century, a disease has the world in its grip. We are just now, hopefully, seeing the light at the end of the tunnel. see you tomorrow alleviates some of that uncertainty. From the moment the needle hits the groove, the innocence mission manage to mitigate that hopeless feeling. Providing instead, that happy, homesick ache, and just enough comfort to get us through.