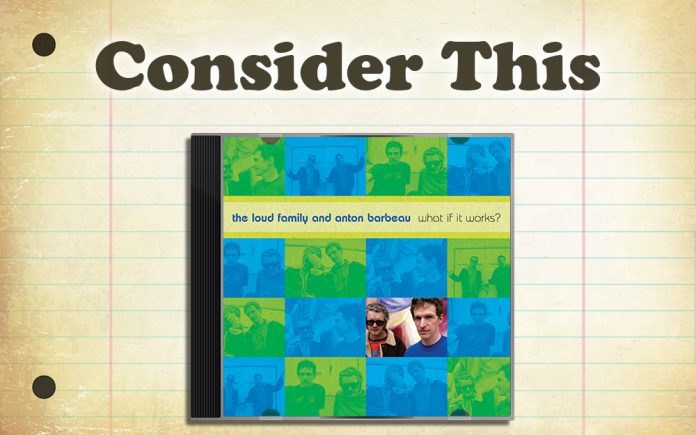 “What If It Works?” (Omnivore Recordings)

that I’m kind of in love with you.”

That’s The Loud Family and Anton Barbeau on “(Kind Of) In Love With You,” off the new reissue of their one-off 2006 collaboration, What If It Works? It’s also exactly how I feel about this brilliant partnership.

One of the enduring mysteries in Pop music is why wasn’t Scott Miller a superstar? The dude had the goods, going all the way back to when the Sacramento native made his bones in his first band, Alternate Learning. His Pure Pop instincts were further on display when he founded his Davis, Ca. based band, Game Theory, releasing five pluperfect long-players and two EPs between 1982 and 1990, and continued with his final combo, The Loud Family. In a perfect world, Game Theory would have been as big as R.E.M. or U2. Critical acclaim was unanimous, but commercial success eluded them. The same can be said for The Loud Family, who took their name from TV’s first reality series, American Family. The docu-series that aired on PBS that chronicled the everyday life of an upper-middle class family, The Louds. Formed in 1991, their debut, Plants and Birds and Rocks and things arrived two years later, followed in quick succession with The Tape Of Only Linda, Intrababe Concern, Days For Days, Attractive Nuisance, What If It Works? an EP and a live effort. Their sound drafted off Game Theory’s chewy mix of Power Pop and Psychedelia, as crystalline melodies paired with hazy, often cryptic lyrics. Anton Barbeau first crossed paths with Scott during the Game Theory years. At his third Game Theory show, he managed to slip a cassette of his own music to the drummer, who passed it on to Scott. They struck up a lasting friendship when Scott called to praise Anton’s music. In the ensuing years, Anton has recorded a plethora of Psychedelic Power Pop classics and collaborated with members of Robyn Hitchcock’s Egyptians, as well as Kimberly Rew from The Soft Boys and members of Cake.

His collaboration with Scott came about rather organically when the pair played together at Sacramento’s True Love Coffeehouse. Although Scott was beginning to transition away from his music career, this felt like a last hurrah. Their chemistry was immediate. Enlisting the rest of The Loud Family felt like a no-brainer. The result was released in 2006 as a joint effort: The Loud Family And Anton Barbeau “What If It Works.” Sadly and shockingly, Scott took his own life in 2013, leaving behind a wife and two daughters. The cool kids at Omnivore Recordings began reissuing Game Theory music in 2014. So, it seems wholly apropos for them to offer the same deluxe treatment for this final Loud Family effort. The record is dotted with three cutting and sublime covers, beginning with the opening track, a crisp and trenchant take on the Rolling Stones’ stripped-down ripper, “Rocks Off.” Although the original felt like a dense and scuzzy juke joint jam, Scott and Anton spit-shine the framework, opening with a slash-y guitar salvo that’s quickly supplanted by sugary acoustic underpinnings, agile bass lines, pounding keys and a Punky, four-on-the-floor beat. Slippery power chords thread through the arrangement as Scott and Anton’s vocals intertwine in a sweet and sunshiny croon. Heretofore indecipherable lyrics are suddenly crystal-clear and duly dissolute; “The sunshine bores the daylights out of me, chasing shadows, moonlight mystery, headed for the overload, splattered on the dirty road, kick me like you’ve kicked before, I can’t even feel the pain no more/And I only get my rocks off while I’m dreaming, I only get my rocks off while I’m sleeping.” The bridge remains sluggish and narcoleptic, but gathers speed on the home stretch as swirly Hammond B3 and lightning strike guitar bring it to a sharp conclusion.

The Stones cover folds nicely into “Song About ‘Rocks Off.’” This sideways homage to The Glimmer Twins weds a meandering melody, impossibly fey vocals, chiming acoustic guitars, throbby, distorto electric riffage, spidery bass and liquid keys to a hi-hat kick. Lyrics cryptically allude to the original’s sybaritic slant; “One dog is flawed, two dogs are perfect dogs, faux pas is moi, so pirouette not o’er this fraud lake swan, I wonder if I’d look older in new clothes.” Blurred keys brush up against scorching guitars on the break, but it’s the ethereal vocals that keep the song breezy.

Anton and Scott split the songwriting chores evenly on the record. Anton’s cuts simply crackle with authority, first up is the angular delight of “Pop Song 99.” Anton’s reedy warble is front and center, anchored by jagged guitars, tensile bass lines, fluttery Farfisa, wily Wurlitzer and a Kinksize beat. The lyrics sketch a sharp portrait of a parental meet-and-greet gone awry; “But here comes her mother, she’s coming for me, she says there’s coffee in the cup unless you’d rather have tea, I say no thank you, I’m thirsty and tea will be fine, she opens up the bible, reads the very first line, it says pop song ringing in my ear, makes me wonder what I’m doing here.” Sticky, sweet n’ sour guitars gum up the break, as the caustic and catchy melody rings insistently in your ear like a, well, like a Pop song.

The title-track opens with sun-dappled acoustic guitars that are immediately superseded by hard-charging electric licks. An irresistible slab of frothy Psychedelia, it’s powered by a wash of Hammond, Korg MS-10, Arp Odyssey and Micromoog, slapdash bass and a snapback beat. Lyrics offer a conversational back-and-fourth between a pair that are hesitant to make a long-term commitment. But it’s tempting to assume that the dialogue mirrors Anton and Scott’s nascent partnership; “What if it fits as tight as it did? The strawberry jam in the jar, giving purpose to the lid/And what if we don’t (oh no)? Where would we go? Each to our dressing rooms of course, and on with the show, but what if it works…” Assorted keys squiggle and skronk on the break, plummeting down a Paisley-papered rabbit hole.

Hypnotic and hallucinatory, “Flow The Water” blends plucky acoustic notes, shuddery, saturated keys, reverb-drenched wah-wah, thrummy bass and a walloping beat. Lyrics offer a bit of autumnal jabberwocky; “There are 12 things to know, but no one knows them all, the only way to go is with your back against the wall, spring has sprung, strum along, the leaves begin to fall, it’s autumn in November, it’s the song that knows us all.”

Along with “Song About ‘Rocks Off’,” Scott manages to up the ante with “Total Mass Destruction” as well as “Mavis Of Maybelline Towers.” The former is a ramshackle Folk-Pop charmer that wraps jingle-jangle guitars, woo-hoo backing vocals, shimmery keys, plinky-plunky piano and spidery bass lines around a chunky beat. Stream-of-conscious lyrics like “There’s a groundswell come out of Brownsville, thinks it’s the word on high, there’s a strip-mall southeast of St. Paul, thinks it’s Palais Versaille (Louis Quatorze says hi), there are rock bands all doing hand-stands, think they’re the thrill to end all thrills, and the fanzines rave, but I can’t see it paying no bills,” are positively Dylanesque.

On the latter, strutting , almost Garage-y guitars collide with rubbery bass lines, darting piano notes and a stuttery back-beat. Urgent and alluring, the lyrics pay homage to an elusive named Mavis. A slice of Power Pop perfection, that will have every listener up on the feet, Watusiing and Frugging to the beat. Well, some listeners.. (Okay, this listener, but if you’re able to remain seated, you might need to rethink your priorities).

Co-written together, the record’s nonpareil number is the aforementioned “(Kind Of) In Love.” Plaintive vocals are front and center, as filigreed acoustic fretwork connects with snake-charmer electric riffs, slithery bass lines, cinematic keys, shaker percussion and a cantilevered beat. The melody shares some musical DNA with The Jam deep cut, “Carnation.” Confessional lyrics allow these guys to wear their hearts on their sleeves; “I don’t know if you’ve noticed, I don’t know what you’ve seen, but the way I think I might be feeling, it’s something more than in-between/And it’s somewhat insane, that it’s sort of this way, almost a laugh, that it’s slightly okay, it’s probably strange but it’s basically true, I’m kind of in love with you.”

Scott and Anton acquit themselves nicely on the album’s remaining covers. First up is a kaleidoscopic take on The Zombies classic, “Remember Me.” Moog-y, droog-y and suitably spooky, it fuses spectral guitars, carnival keys, Player-Piano notes and dissonant harmonies into a ramshackle Waltz. Meanwhile, they also offer up a rollicking and muscular rendition of Cat Stevens’ “I Think I See The Light.” (Apparently Scott was a huge fan of the cult favorite film, Harold And Maude). A piano-driven rocker, it features gritty guitar, feathery Korg MS-10 and soaring Roland Space Echo. Scott snarls and spits misanthropic lyrics like “I uesd to trust nobody, trusting even less their words, until I found somebody, there was no one I preferred, my heart was made of stone, my eyes saw only misty grey,” and then the clouds part; “Until you came into my life girl, I saw everyone that way, until I found the one that I needed at my side I think I would have been a sad man all my life.”

The 2006 version of this album wound down with a couple of bonus tracks, the shuddery and shambolic Beach Boys pastiche, “Don’t Bother Me While I’m Living Forever,” and the jittery angst of “I’ve Been Craving Lately.” Happily, the cool kids at Omnivore unearthed a treasure-trove of extras including six demos and five previously unreleased tracks. They range from an unvarnished version of Interbabe Concern’s “Just Gone,” to a frolicsome “Third Eye,” the bare bones “Little Daisy,” the salacious search and destroy of I Wanna Make You Come Just By Looking At Your Eye,” and the spartan “Rise Of The Chokehold Princess.”

While he was still on the planet, Scott’s music became a touchstone for contemporaries like Aimee Mann and Stephen Merritt (the mastermind behind Magnetic Fields, the 6ths, The Gothic Archies and Future Bible Heroes). These days, both Game Theory and The Loud Family continue to resonate for critically acclaimed artists like Ted Leo, The Posies, members of Wilco, Camper Van Beethoven, Orange Peels, Okkervil River and Spoon front-man, Britt Daniel. Thanks in part to Anton Barbeau’s Psych-Pop instincts, The Loud Family’s swan song, What If It Works? Delivers a deft and crunchy collection of instant classics and shoulda-been hits ripe for (re)discovery. Somewhere Scott is smiling.