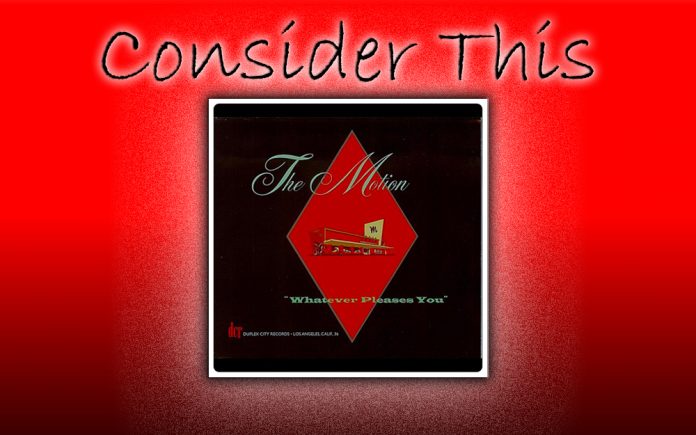 Before The Motion was a band, it was a friendship. Steven Wolfson and David Jenkins grew up down the street from each other in the mid ‘70s. A couple years later they met Paul Riopelle. All three L.A. natives had showbiz connections, Steven’s grandfather had been a screenwriter, David’s dad was a well-known character actor and his mom worked in production. Paul’s mom worked at the Troubadour and his dad, Jerry, was part of Phil Spector’s production team, as well as a talented musician and recording artist in his own right.

The trio cemented their friendship over shared obsessions like the Beatles and Star Wars, all three were aspiring drummers. Pretty soon both Paul and Steven were learning guitar, David started on bass and they each alternated behind the drum kit. Serious woodshedding took place in garages and backyards. Not long after, they were staging backyard concerts for friends and family, as well as recording demos, with the help of Paul’s dad.

The three-piece cycled through a series of names before landing on The Motion. Sending out their demos to music industry folks and local venues resulted in nabbing real professional gigs. Soon they were playing everywhere from health food restaurants to the infamous Troubadour. An older classmate of Steven’s, Eric Satzman, took over drum duties until he went off to college. But the puzzle pieces really came together when the guys met Ryeland Allison in 1982.

Ryeland’s dad, Keith was a musician and sometime actor who made his bones playing sessions for the Monkees and Paul Revere’s Raiders. He also released a well-regarded solo album, Keith Allison In Action. Ryeland bought his first drum kit from Monkee vocalist Davy Jones and received a few tips from Ringo Starr. When he joined, The Motion’s line-up felt complete.

Even though the guys were all still in high school, the next few years were a blur of shows. They navigated the L.A. club scene, managing to avoid the pitfalls of the “pay to play” policies that certain venues strictly enforced. They landed high-profile gigs, like performing on TV series pilot “Summer,” as well as playing some shows centered around the ’84 Olympics. It was around this time that they began recording a professional demo, under the sharp direction of Jerry Riopelle.

The Motion’s momentum slowed a bit, once the guys graduated high school. Some members went off to college, some started careers. For each of the guys, family tradition beckoned. Steven began a career as a screenwriter and Ryeland earned his keep as a studio musician. Paul joined his dad who had relocated to Arizona. There they started a company that combined music playback and live performance. Steven saw two scripts transformed into a couple of well-received indie films. Ryeland ended up working for Hans Zimmer and scoring films. Meanwhile, David worked in the film and television industry and found time to play in bands like Man On Fire and Ten Feet Tall. Soon he connected with Andrew Sandoval, a musician and Grammy award-winning Rock & Roll historian. That led to a stint playing in Dave Davies touring band. The ex-Kink originally jump-started his solo career in the early ‘80s, but it really took off after the dissolution of The Kinks.

Throughout the years, as schedules permitted, The Motion would reunite and play together. Recently, the stars aligned and the guys booked several local shows around town. One thing led to another (just like that Fixx song prophesized), and the guys were in the studio, finally recording their bona fide debut, Whatever Pleases You.

The album opens with a slice of Power Pop perfection entitled “Winding Down.” The song begins tentatively, as skitter electric guitar shadows Steven’s plaintive lead vocals. Rather quickly, band fully jumps into the fray adding tensile bass, a pummeling, kick-drum beat and subtle organ colors. At first glance, the lyrics seem like an artless schoolboy kiss-off; “I probably won’t mail this letter, wrote it on the bus, I’m out looking for something better, a brand new type of lust/You don’t have to act concerned, it’s not like we’re in love, just step aside you’ve had your turn, I’ve taken quite enough.” But it turns out this not-so-callow kid is being cuckolded, he presents his evidence and declares “I don’t need a wristwatch baby to know my time is up.” The buoyant arrangement and instrumentation belie the lyrics’ bitter, brutal youth. As guitars stack on the break, over meandering keys and a tambourine shake, the song and relationship truly wind down.

These guys wear their influences on their sleeves, distilling their shared inspirado into a heady and wholly original brew. The band gets back to where they once belong with “Breakfast On Tuesday.” Tight harmonies and flickering guitar riffs are supplanted by flinty keys, sinewy bass lines and a thumpy beat. Downcast lyrics chronicle a bummer week, from “Breakfast on Tuesday, gonna be Blues day” to “Brunch on a Sunday, not a fun day/How can I eat without you? Without your love I’m doomed.”

“The Way It Hurts” is a sad-sack ballad that splits the difference between Torch and Twang. Chunky electric guitar notes brittle bass lines and a slow, thwoking beat cloak this tender evocation of love. David and Paul’s tight harmonies wrap around Steve’s plaintive vocals and the results are positively Everlyesque. On the break, a warm, tenor saxophone solo puts the ache in heartbreak. The song’s incendiary final verse; “Love’s a ball of fire held in hand. tangled with desire, prove that I’m a man/Have I got the nerve? This is the way it always hurts,” is sung acapella, before a cascade of guitars usher the song to a close.

Both “Minimum Love” and “Somewhere In My Future (There’s A Broken Heart),” employ sly, economical arrangements that echo antecedents like Todd Rundgren, Thin Lizzy and Cheap Trick. On the former, muscular guitar riffs connect with tensile bass, urgent organ notes and some heavy cowbell action. Steven’s delivery is jittery as insists he’s working eight days a week, for minimum returns; “I been workin’ all day and night, and I been workin’ just to make it right/I been workin’ for your lovin’ arms, and I’ve been workin’ just a little to hard, oh I never worked so hard…” The spiraling, twin guitars on the break walks a fine line between AOR bluster and Bubblegum goodness.

The latter sports jingle-jangle acoustic arpeggios that lattice atop strafing electric riffs, folding into shimmery keys, hiccupping bass lines and a hopscotch beat. The elastic arrangement nearly succeeds in camouflaging gloomy lyrics that (to paraphrase Mr. Mojo Risin) kinda wallow in the mire; “The writing’s on the wall, this wall is 10 feet tall, you’ll never see me break down and cry/I feel invisible, this feeling’s typical, I wish I had someone else’s life.” A keening guitar solo is bookended by cheerful handclaps. Somewhere, someone is closing down a tinder account.

Meanwhile, had Badfinger, Little Feat and N.R.B.Q. ever collaborated, it might sound like “Let Him Go, Sarah.” Fuzzy guitars snake around Static-y bass lines, grainy keys and a snapback beat. The awkward Schleprock vibe that characterized “Somewhere In My Future” has vanished. In its place is a swaggering lothario who advises Sarah to ditch the “ideal asshole” she’s with; “Let him go Sarah, he’s not worth the energy, Sarah, lacks all common courtesy, Sarah, he’ll never be as good as me.” Equal parts crisp songcraft, bar band grit, and Muscle Shoals bluster, the song adds some new colors to The Motion’s sonic palette.

The best tracks here cluster in the center and toward the end of the album. “Spinning” weds ringing Byrdsy guitars, pinwheeling bass, lush keys to a sturdy backbeat. Sunshiny harmonies envelope beatific lyrics that celebrate the power of new love; “I’m spinning, I’m spinning, and I can’t I’m spinning, blame this on the love I found.” Who-ish power chords briefly blast on the break but are quickly usurped by melodic bass lines, and a final run around the winsome chorus.

“Down By Law” could sandwich nicely between the Plimsouls’ “Million Miles Away” and Johnny Cash’s “Folsom Prison Blues.” The song is anchored ricochet guitar riffs, boomerang bass and a locomotive rhythm. Honky-Tonk piano and sawing fiddle adds to the Outlaw verisimilitude. Steven curls his lip into a rougish sneer as he unspools a few vivid details; “Well, I shot a man down in New Orleans, for a Cajun woman with voodoo dreams/I ended up in a Memphis jail, I called Elvis’ daughter to post my bail.” Guitars slash and shudder on the break, building to a crescendo before powering down for the fading instrumental outro.

“Naked” is Soulful and snappy, blending shang-a-lang guitars, a walking bass line, pulsating keys and a propulsive backbeat. Paul tackles lead vocals with some sly assistance from everyone’s favorite sui generis chanteuse, Syd Straw. A spitfire guitar solo flares and just as the lyrics insist, this one is “a hard act to follow.”

Other interesting tracks the subterranean siren song of “Chinatown” and the crackling attack of “Deep Blue Sea.” The album closes with “Affair With A Stranger.” Another Power Pop pinata, it’s chockful of sugary guitar riffs, prickly bass lines, crisp harmonies and a walloping backbeat. Had it been released in 1981, it would have given Rick Springfield’s “Jessie’s Girl” some stiff competition on the singles chart.

The four-piece received superstar assists from Syd Straw as well as Elvis Costello Attraction/Imposter drummer Pete Thomas. Helping to round out their sound are Jeff Young, Jay Fienberg and David Kalish on keys, David Plenn on slide guitar, Taylor Plenn on tenor saxophone. Backing vocals were provided by Syd, Evie Shapiro and Chris Allen. Meanwhile, Syd, along with Sofia Wolfson and Julia Wolfson lent a hand (or two) adding some much needed hand claps.

The Motion have created an instant classic. Whatever Pleases You offers timeless, hook-filled melodies, sharp arrangements and trenchant lyrics. But beyond that, there is a sense of camaraderie, love and affection that simply shines through the songs. That’s the true beauty of this record.

To check out the latest news from The Motion, go to: