The Social Security Administration recently announced a 1.7% increase in payments to social security recipients for the next year. This increase is supposed to take into account the increased cost of living that has occurred over the last year. Since 2009, the total increase in social security payments due to higher costs of living totals 8.5%. This means that a retired worker who was receiving $2,500 per month in 2009 will receive $2,713 in 2015.
Has the true cost of living gone up by only 8.5% over the last five years?

The short answer is ‘no’. All you have to do is buy anything and you know better. The true cost of living using the definition that existed and was used in 1970 has gone up by at least 8.5% per year for the last five years. The thing is that the federal government has tinkered with the definitions of ‘cost of living’ and ‘inflation’ more than twenty times over the last forty years.

The federal government has every reason to keep these definitions inaccurately low. If the true and higher numbers were used, the deficit would be much higher. Eighty million Americans who receive government subsidies would receive far more. Interest rates would adjust upward to take into account the increased cost of things. In general, most Americans would clamor for wage hikes. By keeping rates low, Americans are given the impression that inflation is subdued and under control.

The Nixon Administration made the first significant change in how inflation was calculated when they removed food and fuel from the calculation. The Reagan Administration was next by changing how housing prices were calculated in the ratio. They were concerned that increases in real estate prices could overstate things so they switched to an “Owner Equivalent Rent” that essentially removed increases or decreases in home prices from inflation.
The first Bush Administration wanted the ‘new economy’ to take a more prevalent role. As such, they halved the importance of the creation of things (as this was being exported to China) and doubled the importance of the financing things in the calculation of inflation.

The Clinton Administration then made three changes. First was ‘Product Substitution.’ This works off the theory that if you can’t afford filet mignon, you will buy hamburger. As such, there is no need to track the increases in prices as people could not afford them and were just switching to cheaper things anyway. Second, they applied ‘Geometric Weighting’ to the calculations. This is where they replace fast rising prices with products with lower rising prices using the theory that people just won’t buy the items where prices are going up quickly anyhow. Lastly, they made a ‘Hedonic Adjustment’ that takes into account better quality as this keeps the inflation rate down. For example, the iPhone 6 is better than the iPhone 5 so that implied value that is created is used to keep inflation low. Until Clinton, this was never done for improvements like air conditioning, healthcare or air travel.

Not to be left out, the Obama Administration finished the gutting of the inflation rate. Their ‘pricing chain’ theory assumes that people can only afford so much. As such, rather than paying more for something, people just buy less. This adjustment helps to keep inflation lower as people only have so much money.

As a reminder, the points of the cost of living adjustment, inflation rate and consumer price index is that certain payments like those to social security beneficiaries need to adjust based on the actual cost of things. By leaving out food, fuel, housing as well as all of that other silliness simply undermines the integrity of the calculation…as well as the ability of a person living on fixed income to get by.

This approach has worked well as it has given the American people the false belief that we have price stability. In truth, costs are going up while standards of living are going down. 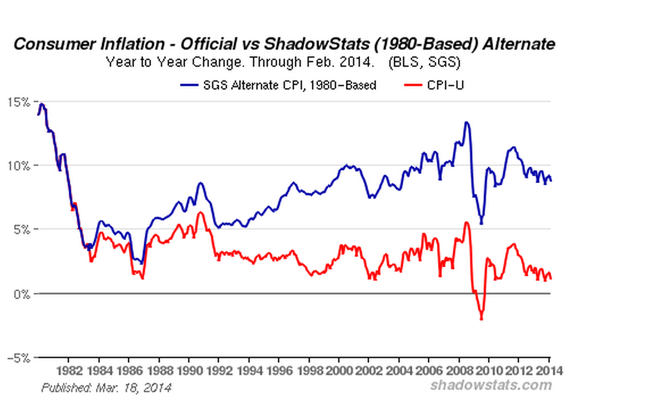