Fentanyl, a synthetic opiate has been used for decades for severe intractable pain in terminally ill patients. It is also used by anesthesiologists in surgery. Currently, opioid overdose is the number one cause of death in United States residents 18–50 years of age. The Centers for Disease Control reported that fentanyl and its analogs (F/FA) were the cause of death in >50% of United States deaths related to opioids in 2016 and were estimated to be >70% for 2017 and 2018 (Hedegaard et al., 2018; Jannetto et al., 2019).

Unfortunately, the F/FAs that are driving the current overdose rates are not from prescription sources or diverted pharmaceutical products, but are manufactured in other countries, sold over the internet, and delivered via private mail sources and conventional ports of entry (Ciccarone, 2017; Armenian et al., 2018). Policies to curtail this crisis must be tempered with common sense and not fear.

Deaths involving synthetic opioids other than methadone (primarily fentanyl) continued to rise with 56,516 overdose deaths reported in 2020. There are test strips available that can test if a street drug is contaminated with FT/FA. Those involving psychostimulants with abuse potential (primarily methamphetamine) also continued to increase to 23,837 (Source: CDC WONDER). (Fig1) 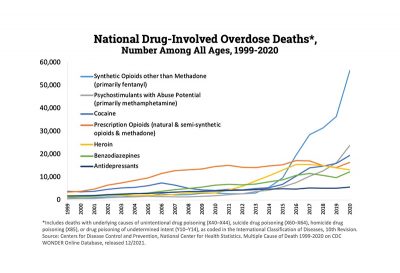 Drug overdose deaths involving heroin rose from 1,960 in 1999 to 15,469 in 2016. Since 2016, the number of deaths has trended down with 13,165 deaths reported in 2020. The bars are overlaid in fig.1 by lines showing the number of deaths involving heroin in combination with synthetic opioids other than methadone (primarily fentanyl) or without any other opioid from 1999 to 2020 (Source: CDC WONDER).

Drug overdose deaths involving prescription opioids show an interesting trend. While deaths rose from 1999 to 2017, from 2017 to 2019, the number of deaths declined to 14,139, followed by an increase to 16,416 in 2020. (Fig 2) There was also at that time a drop in pharmaceutical opiate prescription deaths. Many patients substituted cannabis for opiates, antianxiety, and insomnia medications. In 2020 the uptick in deaths was most probably due to the lockdowns from the Wuhan virus making users resort to street drugs for a high due to the pandemic. 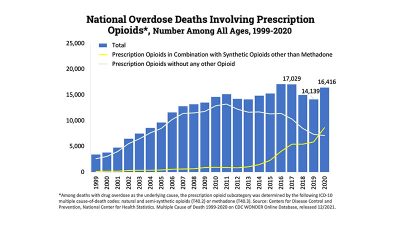 Naloxone is readily used for opiate overdoses, however, it will not reverse overdoses from other drugs, such as alcohol, benzodiazepines, cocaine, cannabinoids, or amphetamines.  Immediate definitive medical attention is needed for every suspected drug overdose situation. ER physicians and emergency personnel must distinguish muscle rigidity and laryngospasm from respiratory depression. “Respiratory depression can be reversed with naloxone. Muscle rigidity of the diaphragm and intercostal muscles can be eliminated by administration of the muscle paralytic succinylcholine” (Janssen Pharmaceutica, 2017).

Another synthetic in the US and Europe is so-called “synthetic marijuana” (a misleading term favored by news media) has been marketed under names such as “Spice” or “K2.” Synthetic marijuana is invoked to describe virtually any herbaceous material treated with a chemical concoction designed to mimic the effects of THC by supercharging the CB1 cannabinoid receptor in the brain. When these synthetic compounds are banned, manufacturers just tweak a molecule or two to stay ahead of the law.

Yes, cannabis is more potent today than in the sixties, but the issue is not the greater potency of these compounds, but their greater efficacy. Potency refers to the concentration of the drug required to activate a specific receptor. Efficacy refers to the maximal activation of the receptor in response to the drug. THC at 2 mg can activate the CB1 receptor but 2 mg may not be effective to relieve the pain.

It is human nature for the addictive person to find ways around the laws to acquire a more potent high. The opiate crisis is a complex problem requiring a holistic and common-sense solution. Opiate overdose deaths will continue to rise until the federal government legalizes cannabis and closes the Mexican-US border. One thing I know for sure is the California legislators will most likely insert themselves politically due to the coming election. I pray they do not make laws that keep legitimate patients from having access to these drugs.