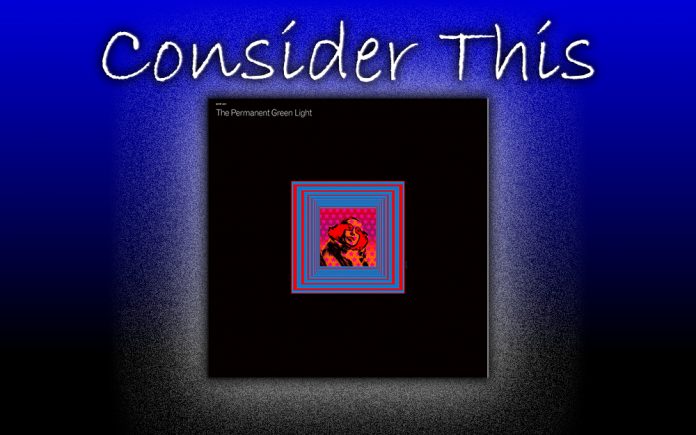 Michael Quercio, best known as the impish front-man for The Three O’ Clock, along with guitarist Matt Devine and drummer Chris Bruckner formed their protean three-piece nearly 30 years ago. They almost took up residence at Jabberjaw, a happenin’ Hollywood coffeehouse where bands like Weezer, that dog, Hole, Nirvana and Beck, felt right at home. The Permanent Green Light released a handful of singles and a full-length album before calling it quits.

Hallucinations was so well-received that the potent trio reformed, playing a few hometown gigs, and reconnected with legendary producer Earle Mankey (Sparks, The Quick, 20/20, The Three O’ Clock, Concrete Blonde). Studio time was booked and a new album was gestating when a crazy pandemic hit, (maybe you heard about it?).

The ambitious concept album, tentatively entitled Musique Profane and the Occultation Of Alfred Jarry, was put on hold, but with a couple of songs in the can the band decided to release a limited edition 7” single featuring two songs, “Enormous Highs” and “Silver Girl.”

The former opens with a fuzzy crunch, had T. Rex and The Steve Miller ever collaborated, it might sound something like this. Pungent riffs thunder over marauding bass lines and a pile-driving backbeat. Michael’s vocal cadence (funhouse) mirrors the ascendent urgency found on “Fly Like An Eagle.” The lyrics pay homage to a woman’s ability to remain relentlessly stoned. She seems to know her way around a joint; “On top of the world tonight, she rolls them so firm and tight, she has enormous highs.” Swirly keys flutter on the bridge as Matt unleashes a scorching solo guaranteed to singe eyebrows and melt faces.

Just as the song lumbers to a close, suddenly the whole enterprises pivots through the looking glass backwards, hurtling toward interstellar overdrive, Chris pounds out a triple-time tattoo atop crashing high-hat action. Michael’s bass lines prowl with a feral agility, zig-zagging around ambient voices that rachet up the paraquat paranoia. The final guitar solo careens out of the speakers, locking into a metallurgic maelstrom and suddenly shuddering to a stop.

The latter is equally puissant. Melodic, yet muscular guitars ride roughshod over angular bass fills and a walloping beat. Michael’s choirboy tenor wraps around lyrics that puzzle over a femme-fatale’s inexplicable suicidal ideation; “Silver girl says she’s got no more to live for, Now, how about that?” Less than empathetic, his reaction veers from glib; “She’s got a lovely fate, she’s got a fine time, she’s got my love to live for” (hey, problem solved!) to vaguely priapic; “Don’t want her, don’t need her, but she will waste what time will come/In her mood, depression rings out and she will spark the wand.” Still, a powerhouse groove is achieved on the break when Matt rips a sweeping solo that synthesizes every ‘70s Guitar God move without ever feeling secondhand or derivative. As the arrangement expands and contracts it all remains tethered to Chris’ juggernaut/jagannatha meter. A sitar-riffic coda, featuring real sitars allows the song to wind down and wind out.

Not all of this single’s enchantment is found between its 7” grooves. The trippy, technicolor cover was created by the well-known Psychedelic artist Robin Gnista. In the spirit of Record Store Day, this double-sided slice of Paisley Power Pop goodness is a limited run of 500 copies. To paraphrase the immortal Janis Joplin, “get ‘em while you can.”

Both songs offer shapes of things to come, exploring that ‘60s/’70s sweet spot and creating something wholly original. Maybe Musique Profane… will see the light of day before the end of 2021.