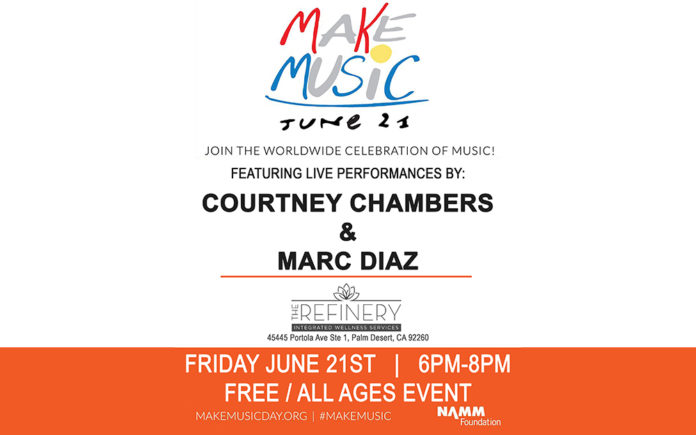 Make Music Day or Fête De La Musique, started out in France in 1982, when the Ministry of Culture dreamed up an idea for a new kind of musical holiday. They imagined a day where free, live music would be everywhere: street corners and parks, rooftops and gardens, store fronts and mountaintops. They invited everyone to come outside and play music on a single day. It was such a simple idea and resonated with everyone who loves music.

On Friday, June 21, 2019 from 6-8 p.m., The Refinery Integrated Wellness Services will host Make Music Day Coachella Valley 2019 featuring acoustic performances from singer/songwriter Courtney Chambers and Marc Diaz of moZaiq, the 2019 Winner of the Coachella Valley Music Award for ‘Best Reggae Artist’. The facility is located at 45-445 Portola Avenue, Palm Desert, California in Suites 1 & 4. The event is FREE, OPEN TO THE PUBLIC and FAMILY FRIENDLY!

The non-profit organization, Make Music Alliance, works with community groups, music schools, and governments in each country that wants to start a Make Music Day. They give people the tools and guidance to organize it themselves. In the U.S., the presenting sponsor is the NAMM Foundation.

Aaron Friedman (Executive Director) is the founder of Make Music New York, a nonprofit organization that produces a city-wide outdoor musical celebration in New York on June 21st. Launched in 2007, the celebration has grown to become the most expansive musical event in the city’s history.

CVW: How far do you feel Make Music Day has come in the U.S. and where would you like to see it go?

Friedman: “When I started Make Music New York in 2007, this musical holiday had been established in France for decades (where it’s called the Fête de la Musique). But it was virtually unknown in the United States. Over the years, the celebration has spread nationwide, and we now have 85 local chapters organizing nearly 5,000 participatory musical events around the country, all on June 21st. That’s quite a lot, but we still have a long way to go before we get to the scale of France, which had something like 17,000 events last year! In France, it’s almost impossible to walk around a major city on June 21st and not bump into people playing music. Our goal is to get to that scale in the U.S., too!”

CVW: The NAMM Foundation is your partner in this global event. What can you say about the organization and what can the layperson do to keep music alive?

Friedman: “The NAMM Foundation is an ideal partner for Make Music Day. Its mission is to keep music education and music-making strong in communities everywhere. No matter what kind of music you like, whether you’re old or young, amateur or professional, the act of making music has profound benefits to your health, your quality of life, and your community. The NAMM Foundation had the vision to see that Make Music Day helps tell that story and inspires all kinds of people to pick up an instrument and make music an integral part of their lives.”

CVW: One purpose of Make Music Day is to communicate that music is universal and can unify everyone. Can you elaborate?

Friedman: “Music is for everyone, and anyone can make music. It’s something that demonstrates our common humanity. When you play music with someone else, you become aware of their individuality and their cultural background, and you find ways to harmonize together. If people create musical connections with the ‘others’ in their community, it humanizes everyone involved and drives a larger impact in society. Plus, it’s fun.”

We also sat down with Courtney Chambers and Marc Diaz of moZaiq, who are performing for Make Music Day Coachella Valley.

CVW: What are your thoughts on Make Music Day and why do you feel it’s important to be involved?

Diaz: “I’m extremely honored to be asked to participate in this global event. I’m a huge proponent of music as a therapeutic tool through expression both for the musician and the listener. I feel extremely humbled and honored to be able to play music. Music is the one thing that transcends all life. It lifts people. It’s what feelings sound like. It eliminates racial, societal, cultural, political, geographical and religious lines. In the end, music heals like nothing else we know. That’s what I like about writing songs; music is the vehicle and my lyrics, and their messages are the passengers. If the music is good enough, I hope the message reaches its destination.”

Chambers: “I’m excited to be a part of Make Music Day. Music brings people together. I know that music is very healing, talent or not. When my dad was older, he was depressed and couldn’t do the things he wanted to do. Then I started singing, and it made him feel better. Once a week we would sing together, and my dad couldn’t really sing but it helped him lift his spirits. He expressed to me how it helped him.

CVW: What are each of you working on in your respective careers?

Chambers: “I’ll be performing with my full band at the Idyllwild Strong Benefit Festival the weekend of August 16-18, 2019 and for the second year, I’m returning to the Academy of Music Performance this summer as Band Coach. Looking ahead at the release of my new album, Revolver, which will be released in 2020, I will be rejoined by my longtime producer, Sean Hoffman (American Music Club, Bedroom Walls).”

Diaz: “Right now, moZaiq is moving forward and we can’t wait to let you see what we’ve got in store. We are stirring it up! We’ll be going into the studio at some point in the near future and we look forward to recording our full-length album. We are going hard.”