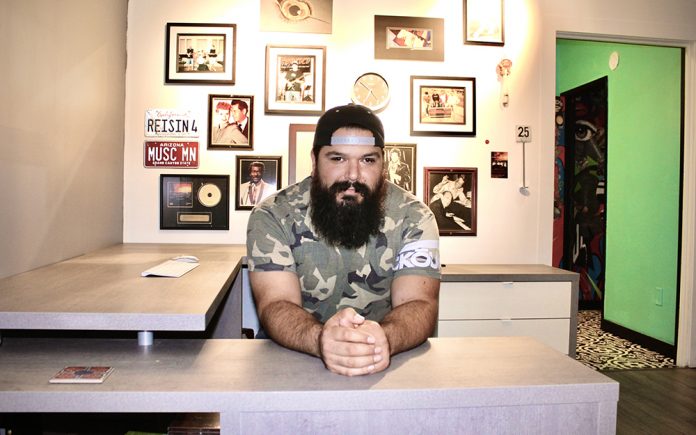 Local artist, musician, businessman and entrepreneur, Abe Reisin has spent much of his life pursuing music as well as success as a business owner. As it has been for most of us, the last few years have been a time of major life changes, trials and forks in the road. Having worked with him in the past on a musical project, I know that Abe is a talented dude and what he is capable of.  I also know that he is not one to make decisions half-heartedly. When he decides to make a change in his life, he dives in head-first with deep thought and gusto. That being said, I was intrigued to learn about Abe’s newest endeavor and the pathways that brought him to this point in his life’s journey.

CVW: What would you say was your inspirational starting point into becoming a musician?

Reisin: “My dad always played guitar. Some of my earliest memories were of him playing guitar in the living room. (Abe points over to a small, acoustic guitar hanging on the wall of the studio space)… He bought me that guitar when I was 5 years old and signed me up for lessons. I quit after a month. (Laughing)…I was 5 years old and I didn’t like it.”

Reisin continues: “When I was eleven, we were attending a really small, Spanish church in El Centro where I grew up. The pastor of that church would play guitar and I would sit in the front row and watch him. I would watch that pastor play guitar and that inspired me to get my dad’s guitar and try my best to copy what that pastor did when he played. I would go home after church and try to copy what I watched him do. Then, eventually I just went ahead and asked him for lessons. I could have asked my dad for lessons, but, for whatever weird reason, I didn’t. I asked the pastor and he went ahead and started giving me guitar lessons at age 11. It kind of took off from there when I discovered a passion that I never knew I possessed.”

CVW: When did you start doing music professionally?

Reisin: “I guess I would say that my first band was around 2003. It was called, “Grounded,” and at 18 I was the baby of the band. The other members were 38 and 40 and we were together for around 3 years. It was actually a Christian rock band and I was replacing a guitar player who had tragically passed away. I never knew the guy. I don’t even remember his name, but I remember they gave me recordings of him to listen to and when I was listening to him shred…I felt so small. I felt like he was so amazing and I would never be able to fill his shoes.”

Reisin continues: “We were together for a few years and I have a lot of great memories of our time together. Eventually we had some issues as a band and we ended up breaking up. It was a weird pain that I went through. It was almost like a divorce and I was only around 20 years old. It was all I did for three years and it hurt. I felt like l lost all of these songs that I had worked so hard to master….even though I didn’t write them, they became mine. I felt so close to them and couldn’t play them anymore. I knew I didn’t ever want that to happen again, so I started my own band, Above the Waters.”

CVW: So you wanted to be in charge of everything at that point?

Reisin: “Basically. At that point I didn’t have any idea whether or not I could vocally hold a note. Then, I started singing. I never knew I could write a song. Then I wrote 50 songs for the first album. Throughout the time with, ‘Above the Waters,’ I think I wrote around 70 songs. A lot of them were junk for sure. But, you gotta get through those to get to the good stuff. That went on until around 2010.”

CVW: You went solo for a while, right?

Reisin: “Yes, I did. There were a lot of various projects that brought a lot of ups and downs but by the time 2015 came around I was basically done. It was too much heartache and too many letdowns. The last show I did was in 2016!  The one we played with Alex Santana at Schmitdy’s Tavern which was great but, after that I put away my guitar for a long time. I was done with music.”

CVW: So, correct me if I’m wrong but, at that point you decided to go 100% adult and start a business, buy a house and during that time became a father, right?

Reisin: “Yes, all of that. I worked hard to gain that sense of stability that I thought I was missing out on so much. But, I wasn’t happy; turns out that you can work really hard for a product and feel zero satisfaction sometimes, especially if what you are working on or for doesn’t really mean anything to you in your heart.”

Reisin continues: “That’s why we’re here now. That’s why I dropped everything and sold much of my business and assets to create, “The Rock Gallery.” I wanted to make my life mean something instead of just constantly working. I don’t mind working at all, but I want to work towards something that means something to me and to others.”

“So many of my happiest memories were from when I was 12 or 13 years old…learning to play new chords, learning to play Nirvana, etc….Feeling so excited when I started a new band. Leaving a band was always hurtful but every time I was able to join a new musical project it was like a new life again. For years I have always wanted to one day…build a studio, produce songs and manage bands! From the age of 15, those were goals of mine! I feel like going on the road sidetracked me. I didn’t so much want to be in a band as I wanted to make a band, produce, manage and all of that. I hope to do a lot of those things and more through, The Rock Gallery.”

CVW: I know the Rock Gallery, which is situated very conveniently in the heart of Downtown Palm Springs is going to be not only a recording and rehearsal studio where musicians can rent time, space and expertise to use in a professional environment…but you are also in the process of obtaining your non-profit status as a school for teaching music to children and teens. 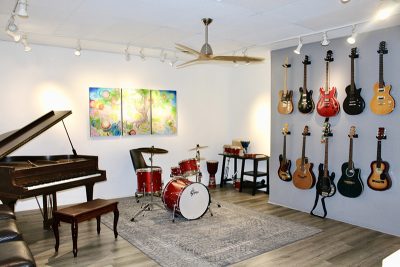 Reisin: “My life changed so much after my son was born. Before he was around, I honestly wasn’t much into kids and didn’t think very much about them at all. After the day he was born, that completely changed. Now everything I do, I think about him. I want to teach him guitar. I want him to learn about music. He’s just a little guy, but I bought him a harmonica and we are working on that.”

My son and my desire to teach him music sparked a flame in me with the idea of teaching music to other kids. At this point I want to focus on kids between the ages of 8 and 17. If they don’t own a guitar, I have a couple they could borrow. I also have multiple amps, a drumset, a piano, etc. I don’t want to live in a world where children who want music lessons can’t get them because they can’t afford them so that is why I am applying for non-profit status. Eventually I am looking to obtain dedicated piano, drum and vocal instructors. I love the idea of being able to put together bands with students as well. I want it to be a place where people can come and express themselves.

The Rock Gallery’s grand opening/open house will be on Dec 11th, 6-9 PM.