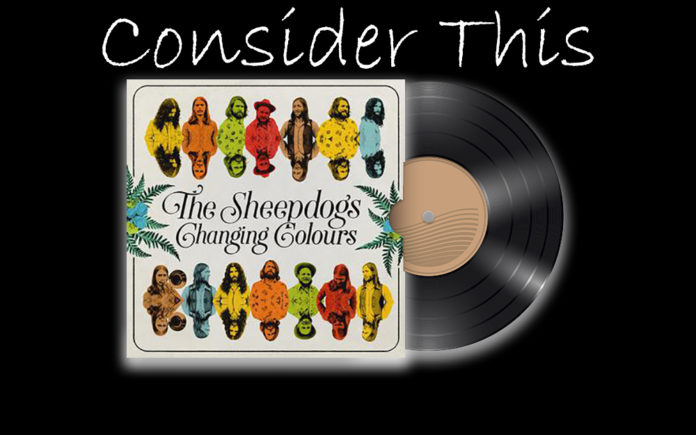 Drop the needle on any track off The Sheepdogs’ latest long-player and you will be instantly transported back to the era of 8-Tracks, shag carpet, shag haircuts and bell-bottoms. Ah, the ‘70s, with a flip of the radio dial, one was treated to the Southern Boogie style of bands like The Allman Brothers, Lynyrd Skynyrd, Outlaws, Marshall Tucker Band, Molly Hatchet, Black Oak Arkansas and the Dixie Dregs. The Sheepdogs are hell bent on reviving that sound. Ironically, the band is straight outta’ Saskatoon, Saskatchewan.

Founder and front-man Ewan Currie is something of a renaissance man. A music nerd, drama geek and jock, all rolled into one. His family moved from Australia to Canada just before puberty struck, and he quickly connected with Ryan Gullen. Although they each went to different schools, both played clarinet and were involved in a regional music program. By the time they attended high school together, they had become close friends. Each began playing guitar, even as Ewan played on the football team and performed in a number of theatrical productions.

The pair met Sam Corbett while attending college and the trio decided to form a band. Woodshedding in Sam’s parents’ basement, they concentrated on mastering a plethora of Classic Rock songs, along with newer tracks from the Black Keys and Kings Of Leon. They also began writing their own music and released an EP as The Breaks. In 2006, a chance meeting with guitarist Leot Hanson led to an invitation to join the band and the four-piece changed their name to The Sheepdogs.

Less than a year after Leot joined, the band self-released their debut, Trying To Grow. Following a year of non-stop touring, their second effort, Big Stand, arrived in 2008. Both albums were recorded locally at Cosmic Pad Studios, as was their 2010 release, Learn & Burn. All three hewed closely to the classic Southern Boogie paradigm, a swampy blend Jazz, Blues, Country and Bluegrass.

The Sheepdogs achieved critical and commercial success pretty quickly in Canada. In fact, Learn… won three Juno awards (the Canadian equivalent of a Grammy), for Best New Artist, Rock Album Of The Year and Best Single. By this time, they had played all over the world, most recently opening for John Fogerty in Australia. But the band had yet to break through in America. They had already made an expensive trip to Los Angeles to play for a gathering of industry weasels, but nothing came of it. Their luck began to change when an agent they’d met back in Toronto sent a demo to Rolling Stone’s “Choose The Cover” competition. Eventually, they competed against 15 bands and won, the first unsigned band to do so.

That exposure led to a performance on “Late Night With Jimmy Fallon,” appearances at festivals like Bonaroo and Osheaga in Montreal, as well as an introduction to Black Keys’ drummer Patrick Carney. Legendary label Atlantic Records signed The Sheepdogs and they headed down to Nashville and to make an album with Patrick Carney producing. The result was 2012’s The Sheepdogs, it shot to #1 in Canada, and the boys continued to gain traction in the states. Suddenly, their music was heard at sporting events like NASCAR, Toronto Maple Leafs’ games and the 2014 Winter Olympics, as well as a nationally televised Cadillac commercial.

By 2014, Leot had left the band, opting to open Capitol Music Club, a bar and concert venue in Saskatoon. Ex-Imaginary Cities guitarist, Rusty Matyas, took his place on the road. Not long after, they returned to the studio and recorded Future Nostalgia. Released in 2015, it followed the ballsy blueprint of its predecessor, leaning toward a muscularity favored by the Black Keys.

Rusty became a full-time member, as did Ewan’s brother Shamus, adding all manner of keys, trombone and percussion to the mix. Guitar virtuoso Jimmy Bowskill joined the touring line-up. Somewhere down the line Rusty left and Jimmy took his place. The newly minted five-piece headed into the studio, the result is their sixth long-player, Changing Colours.

The first three songs, set a good-timey vibe that permeates the whole record. “Nobody” is anchored by stripped-down rhythm Guitar, cascading lead riffs and a kickdrum beat. Ewan’s vocals are as sweet as honey and as smooth as molasses but this Good Time Charlie is trying to outrun the blues; “Across the desert on a mission tonight, we hit the city limits with the sun in our eyes, we got James Brown on the radio, I turn it up just as loud as it goes/I got the feeling that I can’t be beat, I got a pretty mamma in the passenger seat, she said I don’t know how you live so fast, well, I don’t slow down cause it might be the last.” Organ notes wash over the chorus as guitars intertwine, adding some bottleneck grit to the sweet soul-salvation.

Muscular guitar riffs lattice over fluttery organ runs and a stop-start rhythm on “I’ve Got A Hole Where My Heart Should Be.” The lyrics offer a sketchy portrait of a bounder with an Urge For Going, offering up the typical rationale for man-slut behavior; “Hard luck woman meets an overzealous guy, it’s alright, said if you dig me, baby won’t you give me a try? Come on, I got my late night fever and perpetual high, you wanna go, I need to keep on moving so I never run dry.” Synchronized guitar solos on the break recall the harmonic convergence the band Boston perfected on their self-titled debut.

As the song begins to fade, strafing power chords signal the opening notes of “Saturday Night.” Sinewy lead guitar layers over chiming rhythm licks, quixotic piano notes give the track a caffeinated twitch. Shimmery organ, rock-ribbed bass lines, a pounding beat and stacked harmonies achieve lift-off. Easy-going lyrics look for any excuse to cut loose, because, well, it’s Saturday night. It’s not all guitarmony on the break, as prowling riffs give the song a soupcon of Punky danger.

This album finds The Sheepdogs coloring outside the lines on several tracks. Both “The Big Nowhere” and “Cherries Jubilee” confirm these beardy Canadian blokes have got Soul. The former locks into a meandering Samba Groove that calls up ‘70s antecedents like, War, Santana, Malo and Curtis Mayfield. Simmering keys lap over a relaxed conga beat as guitars echo and sway. Socially conscious lyrics remind us “The crack in the world has split way too far, but you can’t observe from back where you are/Protect and to serve, the system’s a lie, you did what’s deserved, it’s the will to survive.” Spiky horns and sinuous organ, mellotron and omnichord give the song a supple grace.

The latter is propelled by a handclap rhythm, bubbling keys and prickly guitars. The melody seems to pay sideways homage to the Dusty Springfield classic “Son Of A Preacher Man,” adding some extra snap, crackle and pop. Spitfire licks give way to tightly concentric guitar riffs that are leavened by some down-home pedal steel. The lyrics are limited to two cryptic verses that feel like a haiku extolling life on the road.

If ‘70s stalwarts like Chicago and Bread ever collaborated, it might sound like “I Ain’t Cool.” The song opens with a brassy fanfare before scaling back to just feathery keys, rubbery bass and rippling guitar. Confessing some deep-seated dorkiness (a Canadian form of humble brag?), the lyrics insist all that will change with the right woman. Soaring horn charts crest over playful organ notes on the break, giving the song a sharp shot of exuberance.

Finally, “I’m Just Waiting For My Time” shapeshifts from a Ye Olde English Folk ballad to dense Prog Rock. It opens tentatively with strummy acoustic guitar and vestured vocals. As the arrangement gathers steam, viola and fiddle are added along with quavery mandolin, twinkly keys, a wash of guitars and a dropped beat. Subsequently, the instrumentation powers down, everything feels stealthy and subterranean, the interplay between piano and guitar echoing the sleek Jazz-Rock pioneered by Steely Dan, as it fades to a close.

Other interesting tracks include the nearly instrumental twin guitar attack of “Kiss The Brass Ring,” the technicolor chiaroscuro of “Cool Down,” the down-home Country Comfort of “Let It Roll” and the crunchy machismo of “You’ve Got To Be A Man.” The final cut on the album is a six-song suite ambitious enough to sandwich between the Who’s “A Quick One, While He’s Away” and the final section of the Beatles’ “Abbey Road.”

It opens with the rustic sing-a-long of “Born A Restless Man.” Guitars are nearly supplanted by frisky banjos, mandolins and Ringing harmonies. Spare lyrics tell the tale of a homesteading couple withstanding the elements before segueing into “The Bailieboro Turnaround.” This intricate instrumental easily showcases the band’s nonpareil style. Honky Tonk piano connects with wily guitars, high lonesome pedal steel see-saw fiddle and a thumpy beat. This song wouldn’t seem out of place on a Flying Burritos record, as it rolls into “Up In Canada,” a sharp, yet sincere ode to their place of origin.

Changing Colours crosses musical borders and boundaries without breaking a sweat. While the instrumentation and arrangements are dense and substantial, the music never feels cluttered or precious. In fact, the vibe is loose-limbed and playful. the sunshiny ‘70s are alive and well here. The Sheepdogs have delivered the perfect record to chase away the summertime blahs.