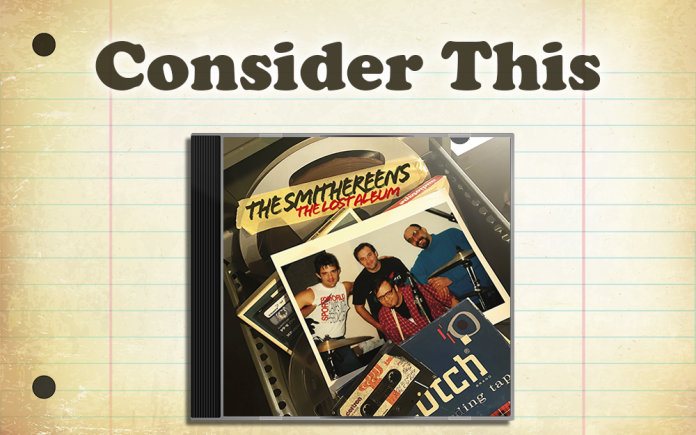 If you were a Rock & Roll fan in the mid ‘80s, the pickings were slim. Punk had mostly remained underground, New Wave existed on the margins, Hair Metal was in its ascendence and the charts were littered with toothless Pop hits from Lionel Richie, Miami Sound Machine, Heart and Eddie Murphy (!). For every “Sledgehammer” from Peter Gabriel, “Manic Monday” from The Bangles, or “Kiss” from Prince, it felt like there were a million vapid songs from the likes of Nu Shooz, Starship, Boston and Sly Fox clogging the airwaves via Top 40 radio and MTV. That’s why the emergence of The Smithereens felt like such a breath of fresh air.

Jersey Boys Jim Babjak (guitars) Dennis Diken (drums, percussion) and Mike Mesaros (bass, vocals) had been pals all through school, graduating from Cateret High School in 1975. A few years later, they connected with Scotch Plains native Pat DiNizio (lead vocals, guitar) when he placed an ad in The Aquarian Weekly, looking to start a band with like-minded musicians who drew inspiration from Buddy Holly, Nick Lowe, Elvis Costello and The Clash.

The four-piece made their bones playing countless bars and clubs on the East Coast and Self-released their first EP, Girls About Town via their own label, D-Tone Records. Three years they were back in the studio recording a second Extended Play, Beauty And Sadness, which began receiving airplay on College radio.

By 1985, they sent a demo to Enigma Records, an indie label that focused on Punk, Alternative, Heavy Metal and Techno. The gambit paid off and they recorded their first long-player, with production from Don Dixon (R.E.M., Dumptruck, Tommy Keene). Especially For You arrived in 1986. A watershed album, it distilled all their influences into a heady elixir that managed the neat trick of sounding fresh, yet familiar. A couple of singles, “Blood And Roses” and “Behind The Wall Of Sleep,” garnered airplay on MTV and more adventurous radio stations and began climbing the charts. The album reached #51 on the Billboard Hot 100.

After touring extensively, the band returned to the studio with Don Dixon to create their second full-length effort, Green Thoughts. They had also taken the leap from tiny Enigma Records to industry giant, Capitol Records, (original home of the Fab Four). Recorded and mixed in an astonishing 16 days, it deftly sidestepping the dreaded sophomore slump, by doubling down on the winning formula established on Especially. The record spun off three hit singles and hit #60 on the charts.

More excellent albums followed: 11 arrived in 1989, Blow Up in 1991 and A Date With The Smithereens in 1994. The band took a five-year hiatus and closed out the 20th century with God Save The Smithereens. For the next decade or so, they concentrated on honoring their influences, recording albums dedicated to The Beatles and The Who along with live sets and even a Christmas album.

In 2015, Pat suffered a couple of serious falls that resulted in some nerve damage. He continued to experience health issues and, sadly, passed away in 2017. A year after his death, The Smithereens chose to soldier on, touring with simpatico guest vocalists like Singer-Songwriter Marshall Crenshaw and Gin Blossoms frontman, Robin Wilson. Recently, the band dusted off some tapes that were originally recorded while they were between record deals in the early ‘90s. The result is aptly entitled The Lost Album. The record crackles to life with “Out Of This World.” Slashing power chords scratch and scuffle, colliding with growling bass lines, a tambourine shake and a bludgeoning beat. The lyrics address a local femme fatale, itemizing both her vices and her virtues; “It seems there’s always someone waiting there for you, you think you’re moving but you’re stuck in reverse, you know that no one’s ever gonna ignore you, you keep saying things just couldn’t get worse/She’s got two chips on her shoulder, she’s never happy until she’s in a fight, last time I was with her I told her, I just want to get loaded tonight.” The verbal disdain is leavened by sugary guitar riffs that weave between the verses.

Although The Smithereens sound usually remained within the Fab Four/Buddy Holly confines of the Power Pop paradigm, they skillfully add new textures and colors to their sonic palette on three tracks. Take “Pretty Little Lies,” which opens with this philosophical nugget; “Life is not a long and quiet river, sometimes things don’t work out like you planned, there is always bad news to deliver, there are things we just don’t understand.” Courtly guitars wrap around thrumming bass, tinkling, glockenspiel-y percussion and a thunking beat. Pat’s sing-song delivery and the genteel melody nearly camouflage the bitterness and betrayal contained in verses that catalogue the detritus of a failed relationship; “One used toothbrush, pencils and a notepad, things you left here made me think of you, now I see them and it makes me so sad, got to go, there’s better things to do.”

“A World Apart” is a canny cross-pollination of Country and Rock fueled by see-sawing guitars, descending bass lines and a kick drum beat. Of course, thinkin’ and drinkin’ are the main ingredients of many a classic Country weeper, and the first verse sets the scene; “I been drinkin’ every night since you’ve been gone, and I still run to you each time I hear the ringin’ of the phone, they say you always hurt the one you really love, and I fit the part, now I can’t stand to live another day a world apart.” Guitar notes chime and ring on the break, echoing the crisp economy of Beatle George Harrison and Buck Owens’ Buckaroo, Don Rich.

Much like Tom Petty’s “Into The Great Wide Open,” “Stop Bringing Me Down” mines those moments when small-town expectations collide with big city disappointment. Sludge-y guitars tangle with primordial bass lines and a cavernous, big beat. A chance encounter at the corner bar stirs resentment on both sides; “See that guy at the bar, moved to L.A. and learned how to play guitar, he’s a big rock star.” But envy is supplanted by a cold dose of reality; “Had a band, had management, had a record deal but it came and went, it’s too late/Met a girl from Beverly Hills, I did all her drugs and she paid all my bills, it was great.” Monster guitar riffs ooze menace as they shadow each verbal thrust and parry.

The action slows for a couple of cuts, “Love Runs Wild” and “Don’t Look Down.” The former is cocooned in shivery acoustic licks, quicksilver bass and an even-keeled beat. Pat’s tentative croon is matched by hushed harmonies. Lyrics parse the vagaries of romance; “Love may come to those who wait, if you try enough, tears will fall and hearts will break, I guess that makes it tough.” A skittery, sitar-iffic guitar solo washes over the break, magnifying starry-eyed tsuris.

On the latter, jingle-jangle guitars partner with boomerang bass and a rat-a-tat beat. Despite the doom and gloom, lyrics manage to slyly name-check an old Fortunes hit single; “Here comes that rainy day feeling again, it follows me around like a friend.” Honeyed harmonies envelope self-help mantras like “Why are the rain clouds inside my head, try walkin’ in the sunshine instead,” Vroom-y guitars on the break nearly succeeds in elevating the Eeyore vibe before the song stutters to a halt.

This album is front-to-back perfect, but three songs really stand out. First up is the swaggering “Monkey Man” which is anchored by fuzz-crusted guitars, sinewy bass lines and a piledriving beat. Somewhat cryptic lyrics walk the straight and narrow; “I try to roll with the punches, I try to ease up the fall, but when the monkey man calls me I ain’t worth nothin’ at all.” Until the specter of addiction creates a destructive distraction. Jim rips a scorching, Stonesy solo that belies impotent confessions like “I want to lead a good life, I want to live my life free, but when the monkey’s around, I’m my worst enemy.” If The Beatles and The Monkees had ever collaborated, it might sound something like “Face The World With Pride.” Stacked, syncopated harmonies crest atop ringing, stinging guitars, rubbery bass lines and a hiccupping beat. Lyrics offer up some not-so altruistic advice to a beautiful girl; “It’s such a heartless game, and such a wicked shame, that you’re believin’ all the same old lies/And you just can’t pretend that things are different when his passion’s not the same as your desire…Face the world with pride.” The rollicking arrangement makes room for a Rockabilly-inflected guitar solo that simply crackles with authority.

Finally, tongues are firmly in-cheek for the faintly Right-said-Fredded “I’m Sexy.” Slithery, sidewinder guitars collide with scuzzified bass lines, flowery Hammond B3 and a chunky backbeat. Instead of suffering from being too sexy for his shirt, so sexy it hurts, our hero experiences the sting of rejection and takes his tormentor to task ; “Listen to me please and I will give you some advice, I’ll say it very carefully, I won’t repeat it twice, the way you treated me was mean and never justified, someday you’ll be old and then you’ll have to pay the price because I’m sexy…” Prickly guitar chords cluster on the break splintering and spiraling counter and clockwise, leading into an irresistible shout-it-out chorus. As the song winds down, jaggy guitar riffs spontaneously combust on the outro.

Other interesting tracks include the lovelorn “Dear Abby” and “Everyday World” which echoes ‘60s touchstones like The Byrds, The Kinks and The Zombies. The record closes with “All Through The Night,” a feathery lullaby fueled by acoustic chime, angular bass, ethereal keys, distorto electric riff-age and clanky tambourine. Lyrics attempt to banish the monster under the bed; “Don’t you know things will be alright, I will be there with you all through the night, little darling, don’t you be afraid of the night, don’t you cry, it’s okay to turn out the light, little baby, nothing’s going to harm you tonight, close your eyes, daddy’s home, now everything’s right.” It’s a tender and heartfelt end to a great record.

Recorded during a tenuous time in the band’s history, just as they severed ties with Capitol Records, but before they’d secured a deal with RCA, the songs they wrote and recorded are sanguine and self-assured. The Lost Album, is sorta presented as an odds and sods collection, but these songs still display their keen sense of songcraft. Their music never sounds old-fashioned, dated or obsolete. There’s a beauty and sadness to The Smithereens’ sound that remains timeless.