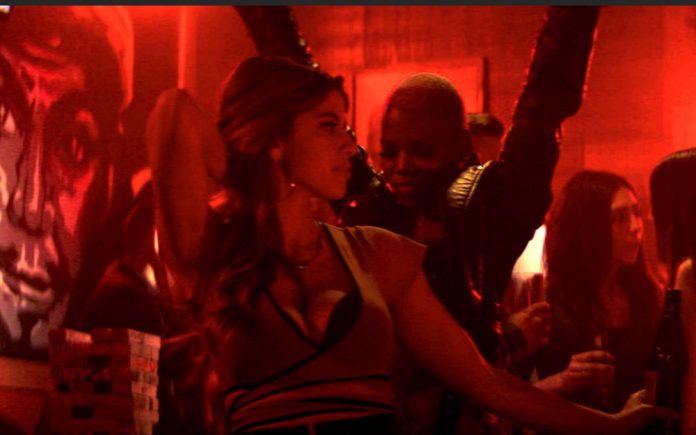 When you think of some of your favorite movies ever produced you can’t help but think of the music attributed to those movies; Am I right? How many times have you heard a song and it instantaneously takes you back to the movie it was featured in?

A soundtrack is that nostalgic recorded music accompanying, featured in and synchronized to the images of a motion picture. The Coachella Valley’s preeminent movie director Christian Sesma realizes the need to give the soundtrack as much attention as the movie itself. Sesma has transported his beloved CV on his back and on a journey through movies like Vigilante Diaries and The Night Crew. Never one to shy away from utilizing local talent, Sesma is well-known for employing as much of the desert’s resources into his films as possible. For his newest film, the crime and action thriller Paydirt starring Luke Goss and Val Kilmer and out on digital and Video On Demand Friday, August 7, 2020, the soundtrack includes CV artists Giselle Woo, Slipping Into Darkness, DJ Day, Adrian Crush, DarealKurlzz, Sonny Bruno and Grand Finale.

Coachella Valley Weekly spoke with Sesma and a few of the soundtrack’s featured artists in anticipation of the film’s release.

CVW: How did you determine which artists to involve in Paydirt?

Sesma: “First and foremost, for me, as writer, director and producer of this, I wanted it to be 100% local. I’ve worked with Giselle Woo in the past, she did the title track for me before and same thing with Slipping Into Darkness and DJ Day. Those three have been putting music in my movies for the last ten years. I really wanted to make sure they were heavily featured again.”

CVW: How much do you feel a soundtrack plays a role in the success of a movie?

Sesma: It’s huge! This is what it is to make movies; it’s sound and picture put together. That absolutely sets the tone and the vibe of the movie itself. It was also cool bringing in some really old school local artists. Anybody from out here knows who these people are. This is going to be all over the world, much less all over the country, such as this morning on ABC’s Good Morning America, millions of people got their eyes on it. With Grand Finale, that ‘West Coast Hip Hop’ song from Easy D and Young Master A was an anthem out here in the late 80’s. It’s a low-key desert thing, it’s almost like a local ‘Easter Egg’. They were the only local Rap stars in the late 80’s. People don’t know that I used to be an MC and that I came from the music world even before I got into movies.”

CVW: In what way or manner do you decide where an original song will fit versus using the film score?

Sesma: “It’s a feel, it’s like painting. Movies are made in the editing and post-production process. When we’re shooting, all we’re doing is gathering the pieces that we’re going to use, that’s not making the movie, that’s making the pieces to make the movie. In editing, we call it tech support, we start putting music in there and start setting things in to see how it fits. I’ve always been known to have an eclectic soundtrack in my movies, from Hip-Hop to Rock to Folk to Classical, I’ll be all over the place.”

CVW: You’re very close with a lot of local musicians like Giselle Woo, Nigel Dettelbach and DJ Day. Tell us about your relationships with them.

Sesma: “We’re all good friends. We’ve been friends for a long time. With DJ Day, he is gigantic. I’ve known Damien since 9th grade. It’s awesome to be able to grow in my career and then showcase other artists that have grown in their careers and all of us just celebrating the success of each other.”

CVW: We have a growing pool of young filmmakers in the Coachella Valley through organizations like the Palm Springs High School Arts Institute and College of the Desert’s Film Program. How important is it to you to be involved?

Sesma: “I’ve been a mentor at PSHS Arts Institute for eight years mentoring young students trying to help them understand what it means to be in the movie industry and providing them a working mentor, it’s not just in theory or a video professor showing them how to do it, but someone who is actively working in the industry. In shooting locally, we hire a bunch of young talented people who want to understand what it is to work in the industry.”

CVW: Paydirt features the Coachella Valley like no other film produced. How proud are you of our community and your team?

Sesma: “Paydirt is going to be awesome for everybody across the country and across the world to see 100% local talent. The Coachella Valley is fully infused in this movie. This is 100% shot here and 100% soundtrack from CV artists. I’m born and raised here. A few actors are from here. It’s amazing to bring big stars to my backyard.”

CVW: Composer Nima Fakhrara (The Signal, The Pyramid, The Girl in the Photographs, Detroit: Become Human) scored the original music for Paydirt.

Sesma: “Nima is awesome! We’ve worked together in the past, but this is the first one where he and I got to let loose on. He’s from Los Angeles. Nima’s amazing! We’re working on our next project together as we speak and getting ideas for the next movie. It’s all exciting!”

CVW: What are the prospects a Paydirt Soundtrack could be released?

Sesma: “I don’t know yet. I hope so. We’re going to see how that goes. It’s really up to the artists themselves. We’ll see how we can help coordinate that.”

CVW: What was your experience in providing original recorded music for PayDirt?

Woo: “It was an unforgettable experience that I had only ever dreamed of!”

SID: “Christian heard our unreleased album and picked out two songs for the film. It was all love, we are happy to be a part of it.”

Crush: “This was all possible thanks to Giselle Woo. She forwarded a couple of my songs to Christian and he contacted me shortly after.”

Darealkurlzz: “The experience was great… me and the whole team are very excited to be a part of what Christian has going on.”

CVW: How does it feel to be affiliated with a major motion picture that includes Val Kilmer?

Woo: “I feel truly honored. It is an immense privilege to be featured in a film that stars Val Kilmer!”

SID: “It is a complete honor because we all love movies like Batman Forever and The Doors.”

Crush: “At this moment, putting aside COVID-19 as we are all going through a life change because of it, for the past year I’ve been spending a lot of time at the hospital due to my son Kingston being born premature at 1 pound 13 ounces; his condition is critical. He’s on a ventilator 24/7 which my wife and myself have had to go through extensive training to be able to care for our child. I simply feel honored and grateful. Anything I could do to make Christian’s life a bit easier, even if it was simply giving him the ‘go ahead’ to use my song, hey man, rock it! I’m happy he felt my song was the missing piece to the puzzle.”

Darealkurlzz: “To be a part of a major motion picture has only showed me more possibilities for my music.”

CVW: What can you share about Christian Sesma that we may not already know?

Woo: “Christian is amazing to work with. He has been a supporter of me and my music for many years and the way he ‘puts on’ for his hometown is admirable. There are so many cameos of locals in this film along with local band’s music featured in this movie and I can’t wait to see it!”

SID: “Christian is friends with Max Durazo of Cafecito, who is our singer’s older brother who introduced us to Christian years back. Since then we have developed a cool friendship. One of his first movies was shot in Tijuana, MX.”

Darealkurlzz: “He definitely has a vision for his movies. Big ‘ups’ to Christian for representing the Coachella Valley and letting a local artist get his music on more platforms.”

CVW: What kinds of projects are each of you working on currently?

Woo: “We are in the final stages of our first Giselle Woo and The Night Owls album! We are releasing a single August 7, 2020, on Bandcamp and are extremely excited!”

SID: “Slipping Into Darkness is releasing our new album on vinyl and all streaming platforms September 15, 2020! During quarantine we have recorded demos for producers to get started on the next album. We are shooting multiple music videos as well.”

Crush: “When my son was born July 24, 2019, I made the decision to temporarily retire from music to focus all my energy on my son who dearly needs me. However, I do have a song I recently released on YouTube on my son’s 1st birthday entitled ‘Kingston Strong – Miracle’. I added footage of Kingston’s journey to accompany the song.”

Darealkurlzz: “I’ve been working on my project called ‘Henny On The Rocks’ and will be releasing it this year.”

CVW: What are some of your favorite movie soundtracks?

Woo: “Some of my favorite soundtracks are Y Tu Mamá También, Austin Powers: The Spy Who Shagged Me and O Brother, Where Art Thou?”

SID: “Some of our favorite soundtrack/scores are from Something About Mary, Pulp Fiction, Little Nicky, Joe Dirt, Dumb and Dumber, Detroit Rock City, all the Star Wars movies and the original animated Jungle Book!”

Crush: “I’m a huge Michael Jackson fan. He released a filmed entitled Moonwalker back in 1988. That by far is the best soundtrack. I also enjoy the Edward Scissorhands, the original Willy Wonka & the Chocolate Factory and Back to the Future soundtracks just to name a few.”

Darealkurlzz: “Definitely The Fast and the Furious and Straight Outta Compton.”

Find more on each artist below:

Giselle Woo and The Night Owls

Find Slipping Into Darkness on Bandcamp and Soundcloud

Produced by Berto Munoz aka DJBO “In The Mix”