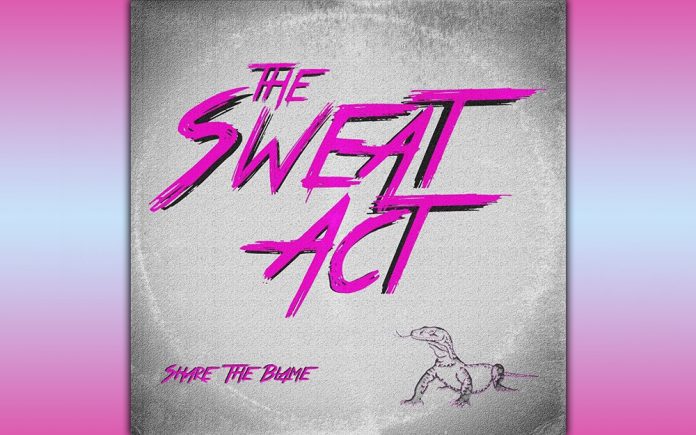 Just three dudes from Southern California making music? I don’t think so. Since 2014, The Sweat Act has been that sought after band who music fans waited for and hoped for in the Coachella Valley. Whetting appetites only once in a blue moon with their ever-elusive leader Chris Long, who is spotted less frequently than Sasquatch, the band is back again with Long on vocals and guitar, Dan Wheat on bass and background vocals and Troy Whitford on drums. Encompassing elements of Punk, Rock, Indie and the sorts, the band released Share the Blame (Regurgitation Records) in early 2020 to enough positive strokes that they sold out of physical copies in one month. You can still download the album on cdbaby.com and stream it on Spotify.

This is the Coachella Valley Weekly review of Share the Blame:

A hellacious uptempo opening song where Long’s vocals are smooth and resonate effortlessly, Whitford’s drums are driving and he seemingly hits on every piece of drum hardware. Wheat’s bass playing is exactly Punk and digitally manipulating. That anthemic “whoa, whoa” is just what the crowd needs to get pumped. “Can we start again? Do you remember when we met for the first time?” The band has a place in mind.

An ethereal guitar intro from Long that leads to the soul in Long’s vocalization. He is reminiscent of a Punk Michael Bublé, seriously! The dude can croon as well as scream at the top of his lungs. The breakdown just before the 3:00 mark is a welcome to provide dynamics and prove that The Sweat Act are more than what they seem. “I didn’t pick up on the habit, we’ll see who’s laughing later on, I’ll try to recognize the pattern, and I’ll end up like everyone.” I won’t begin to conclude that I know what the hell they are talking about. What I do know is that there is a message.

A Buddy Holly-esque intro. In this song, Whitford and Wheat are “in the pocket” as they say, ahead of the beat just rightfully so. Wheat hits the strings just a bit harder on this one and it makes all the difference in where he lands. I can listen to the drums and bass all day. Long has the right balance of vocals and peppered guitar magic.

A swaying ode to the too cool “Homecoming Queen”. Big stroking instrumentation to symbolize a big sarcastic middle finger to those who believe they are superior in some way. Maybe all the pretty people do come from California, but we have The Sweat Act too! So fuck you!

The most Punk song so far. It’s more resonant and driving. Here’s more, what may seem nonsensical lyrics, but as with most Punk songs, there is meaning in the most obscure of words. “When I go driving, I get drunk…when I get lost, I’m gone forever.”

Before the song begins I’m trying to figure out this acronym. After not-so-extensive research, I found the Securities and Exchange Commission of Pakistan. A fun short song about evolution…I think.

Thank you for the funk. A little Parliament with the elements of Earth Wind and Fire. This is where Wheat excels and can “go off”. You can expect his notorious showmanship and leaps and almost hitting his head on venue ceilings during this song. “Something strange has taken a hold of you…science fiction creates something so real.” Change is good I guess. Dare I say this tune is radio friendly to these three magnetic beings? They would likely curse me for suggesting such a thing.

The closer begins innocently enough as if you’re floating through a swaying field of white pistils. Then the crescendo of instruments. The pistil is a female cannabis sex organ and are important to marijuana growers. They tell the grower a lot about the cannabis lifecycle. Maybe The Sweat Act is like the white pistil; as time goes on, the pistil becomes more mature and red. This is the biggest sounding, most unafraid song on the album and rightfully puts this batch of songs to bed.