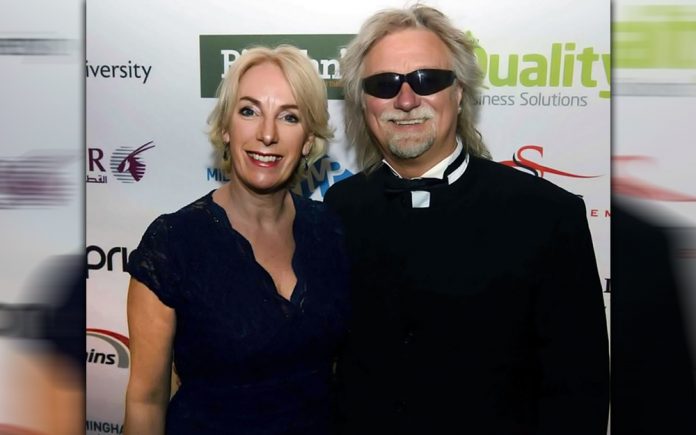 The name Barry Tomes is now synonymous with the Coachella Valley music scene. Having originally sparked an overseas connection with 2019 Coachella Valley Music Award winner for “Best Youth Band” Pescaterritory, Tomes has broadened the invite and has featured the music of several other CV artists such as Courtney Chambers, Rick Shelley and Empty Seat on his US10 Radio Show in Birmingham, England.

UK public relations guru and Gotham Records owner Tomes and UK television and radio presenter Monica Price will be returning to the United States this week to continue their musical voyage of spreading all music around the world. The first stop for the pair is Los Angeles, California, where Tomes has attended the BPI Sync Missions, specifically looking at how to get music into film and television. Tomes has delivered many seminars across the world speaking about the music industry and how to make money from your music.

They will be arriving in Palm Desert, California on Friday 2/21 and will be hitting the ground running. Normally both would be attending one of the biggest music awards in the world, the Brit Awards, but the U.S.A. came calling this year!

Price is a respected and well-known presenter and producer who works with Sky UK, British Broadcasting Company (BBC) and Talkradio to name a few. She has presented at many music festivals and hosts musicians across the world on her television show Late Night With Monica Price. Price is always looking for new artists to film and is keen to meet and get to know musicians in their respective regions.

Together Tomes and Price have their own production company, Tomes Price Productions and have filmed television documentaries in the UK, U.S., France and Ireland. Their speciality is telling real-life stories from musical artists and producing hard-hitting documentaries. Their most recent short film, Let Me In, was nominated for a Royal Television Society Award. The film is about families with children who have autism from three countries and the effect it has had on their lives. This particular project took them across the UK and to New Jersey, USA and Jamaica.

Tomes has spent many years coming to America and now with his US10 Radio Show is looking for new artists and music from the Coachella Valley to showcase in the UK. The show has gone from strength to strength and features solely U.S. artists from any genre, new or established. His experience spans nearly 49 years and has taken him across the world with many of his celebrity clients. His expertise is to seek out artists with talent and present them to the major television channels, radio and media worldwide including UK, USA, France and Australia.

Coachella Valley Weekly spoke with both Tomes and Price as they prepped for their trip.

CVW: Barry, when was your first visit to the Coachella Valley?

Tomes: “I first worked in Palm Springs in 1984. I had a UK artist perform at a gay event. There was no stage when we arrived during the day and it was their first gig. We built a stage that afternoon using quick drying black board paint to cover the plywood.”

CVW: Barry first connected with Pescaterritory in mid-2019 as they prepared to record new music. We owe a huge thank you to the Pescaterritory family for bringing attention to our area.

Price: “It’s a shame we weren’t there for PESCAFEST but they are arranging a gig for us on Sunday 2/23 at Big Rock Pub in Indio which is great. We have a meeting with the parents to discuss their tour in the UK this year. Barry has secured a festival slot for them this summer.”

CVW: What else are you and Barry hoping to accomplish with your visits to Los Angeles and the Coachella Valley?

Price: “Barry and I have a meeting in Los Angeles at Capitol Studios on 2/20 then we will head to the desert on a fact finding mission and to get to know the area and people. I definitely welcome meetings with key players, artists, venue owners and future business opportunities there, and of course get to see some bands live! I am really keen to get an overview of the music scene there because I still think a television documentary of the two cities, especially with Barry’s history of the Birmingham music scene, would be a great asset. We are leaving the desert on Monday as I have meetings in Las Vegas on Tuesday.”

CVW: Barry, you’ve worked with several artists from our area already. Please share about some of the artists and what you have enjoyed about them and their sound.

Tomes: “Pescaterritory is brilliant! A potential new Led Zeppelin! Also mega-important is they respond in a timely fashion to requests very professional. I first saw them at Pappy and Harriet’s. Empty Seat would fit perfectly at one of our local venues who have lots of U.S. bands on. It’s called Joe Joe Jim’s. It’s 100 years old this year. It’s now run by the great grandson of the original owner. You know you could sit with Empty Seat and talk music all night. Rick Shelley was also featured in the show. I loved his acoustic guitar playing, it’s great traveling music. And then there’s Courtney Chambers, another local artist who really impressed me. I could hear Fleetwood Mac in her sound. Finally, I love the jingles these guys sent me to help promote the radio show.”

CVW: What else will you and Monica be partaking in while you’re here?

Tomes: “We are seeing Sheryl Crow perform at Fantasy Springs Resort Casino. But mainly I want to catch as many new artists as possible. I am totally into giving new artists a break. The music industry has given me such a great life. I love to give back.”

Coachella Valley Weekly welcomes Barry Tomes and Monica Price to the desert for what we hope is an ongoing and mutually beneficial relationship. Please join us at Big Rock Pub at 79-940 Westward Ho Drive in Indio, California on Sunday, February 23, 2020 at 6 p.m. to show them our hospitality and to cheer on our very own Pescaterritory!

Any artist who is unable to meet Tomes or Price while they are in the U.S. can email an mp3 of a song of any genre to be added to the US10 Radio Show.

For any artist wishing to contact Price, you can email her at: monica@monica-price.co.uk