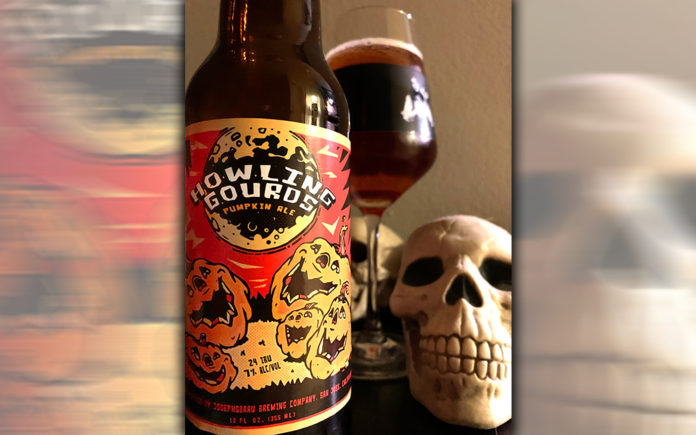 If you’re the kind of person who likes pumpkin pie spiced beers, you’re going to want to heed the warning that’s within this article. But also, if you think creamed cheese powder, whole fruit pies, fried chicken, and sriracha sauce have no place in beer, but cloves and allspice do, your taste buds have some serious developmental issues. As in, your taste buds probably had a really hard time passing the third grade, and your homeroom teacher had personal issues with you for eating all the paste because she had to pay for those supplies with her own money. And that’s totally okay because we here at  Brewtality don’t discriminate, and in fact, paste eating and window licking are two of my favorite pastimes. Look, I don’t hate all pumpkin beers, there’s a couple of them out there that don’t taste like you’re drinking agricultural runoff water, but holy dog shit, Trader Joe’s Howling Gourds Pumpkin Ale is absolutely the worst beer I’ve rage-drank in a long time. It’s offensively bad, and I’m seriously too upset to write right now…except this article is already past deadline so I’m going to have to write right now.

Josephbrau is a line of Trader Joe’s house beer, contract brewed by Gordon Biersch in Jan Jose, California. Contract brewing is when a store or brand decides to release their own line of beers but lack an actual brewery, so they sublet out the work to a real brewery to make on their behalf. Trader Joes has several house brands all made by different breweries, and the contract they’ve given Gordon Biersch is a pretty sizable one. You’ll find the Josephbrau label on all of TJ’s European-style beers as well as their seasonal releases and Howling Gourds Pumpkin Ale is released at the start of every fall to commemorate the season of witches and turkeys. Sold in 6-packs of 12-ounce bottles for $6.99, this year’s Howling Gourds features revamped label artwork (a fun and colorful group of pumpkins literally howling at the moon) with the beer’s stats featured front and center. Coming in at 7% ABV and 24 IBU, this beer’s selling point is low bitterness and high alcohol for a very reasonable price. None of that is what’s wrong with this product, but I didn’t know that until after I purchased a bottle and brought it home.

If you want to read pretentious, literary assessments of the appearance or nose of this beer, you can log into beeradvocate or ratebeer for that, I’m here to focus on one facet and one facet alone. The horrific taste. Simply put, someone messed up bigly at Gordon Biersc- er, I man, Josephbrau, and added a gazillion times more clove to this recipe than it called for. Or at least that’s what I hope, because if someone engineered this glass of gramma’s perfume flavored beer on purpose, they need to stay far away from a job that has them creating anything. I mean it; I don’t trust that guy making ashtrays or birdhouses if he thought adding ALL the clove to this recipe was a bright idea. One sip of this product, and that is all you taste! The medicine and perfume, antiseptic flavors of clove, all jammed in your pie hole like your mouth is some baked ham. So much clove that it actually made my mouth numb. I have a jar of pumpkin pie spice in my spice cabinet- hold on, let me go get it. Okay; the ingredients are cinnamon, ginger, nutmeg allspice. That’s it, and you want to know why? BECAUSE CLOVE IS AWFUL. It has no place in pumpkin spice. Ever! The flavor is distracting even in small amounts, and when overused, it easily overpowers the flavors of less potent spices like ginger and nutmeg, as perfectly exemplified by this beer. As off-putting as the flavor of 2019 Howling Gourds is, I drank the entire glass in a naïve attempt to find more subtle undertones of flavor beneath the pornographic amount of cloves in this recipe. As it warmed, I did pick up notes of ginger, cinnamon and allspice, all in a base beer that wasn’t particularly bad. Some earthy, vegetal flavors were detected, giving me the impression that there might be actual pumpkin or squash in this beer. If the overpoweringly heavy taste of clove weren’t present, this would be a pleasant and drinkable product. As it stands, I can’t see how anyone can enjoy this travesty of brewing. I can only imagine that this flavor profile was not intentional, but 3000 gallons of it was made, and no one wanted to be responsible for pouring it all down the drain to have to start again. Production costs and company deadlines keep a lot of breweries from throwing away product that they know is bad before they even release it to the public. These are just guesses, and in no way am I saying what actually happened.

Stay as far away from this beer as you can, do not be lured in by its budget pricing and higher ABV. This beer is complete trash, 5/5 dumpster fires for sure. You have been warned!