Music is very much a part of the Coachella Valley. We are fortunate to have all genres of music – from rock to jazz to classical and everything in between. The Valley is also home to very talented musical artists. On April 14 and 15 five of those very talented vocalists will be singing the songs of the late Jack Lawrence. It will be Darcy Daniels, Keisha D, Charles Herrera, Phillip Moore and Bill Lohnes as Jack Lawrence who will bring the works to life.

They All Sang My Songs, highlights just some of the works of Jack Lawrence. The performance is produced by Burt Peachy and Mr. Lawrence’s adopted son Richard Lawrence. The shows will be performed at the Pearl McManus Theater at The Palm Springs Women’s Club, 314 South Cahuilla Road, and Palm Springs.

Jack Lawrence’s career had several twists. He graduated college in 1932 and was on track to be a podiatrist. He served I the military. But music took control.  He was inducted into the Songwriter’s Hall of Fame in 1976.

While in active military service during World War II Jack wrote the official song of the Maritime Service and Merchant Marine, Heave Ho! My Lads, Heave Ho!  He went on to write other works including Yes, My Darling Daughter, which was long time Palm Springs resident Dinah Shore’s first record.  Another song helped launch the solo career Palm Springs resident Frank Sinatra.  The song “All or Nothing at All” was Sinatra’s first solo hit. In a 1944 interview, Sinatra noted that he sang that song for his audition with for Tommy Dorsey and that was his first big record.

But Lawrence’s impact on popular music lore was not yet finished. Released in February 1947 he wrote the song Linda it for the then-five-year-old Linda Eastman, the first wife of Beatle Paul McCartney.  Lawrence also wrote the lyrics for classics such as “Tenderly” and “Hold My Hand.”  That song was featured in the Debbie Reynolds/Dick Powell romantic comedy Susan Slept Here.  It was nominated for the 1954 Academy Award for Best Song along with “Count Your Blessings” from White Christmas; “The Man That Got Away” from A Star Is Born; and the winning song, “Three Coins in the Fountain” from Threes Coins in the Fountain.

In the ’80s, Lawrence was both a Broadway producer and owner of the Jack Lawrence and the Audrey Wood theaters. He was co-producer of the long-running off-Broadway Other People’s Money. He also co-produced the Broadway shows Lena Horne: The Lady and Her Music and Come Back to the 5 & Dime Jimmy Dean, Jimmy Dean.

These performances are an opportunity to hear music that has become a part of the American fabric. We hum these tunes and now we have a chance to learn more about the man who created these works.

Tickets are $20 and performance time is 7 pm. For more information on They All Sang My Songs-A Musical Tribute To American Songbook Composer Jack Lawrence visit theysangallmysongs.brownpapertickets.com. 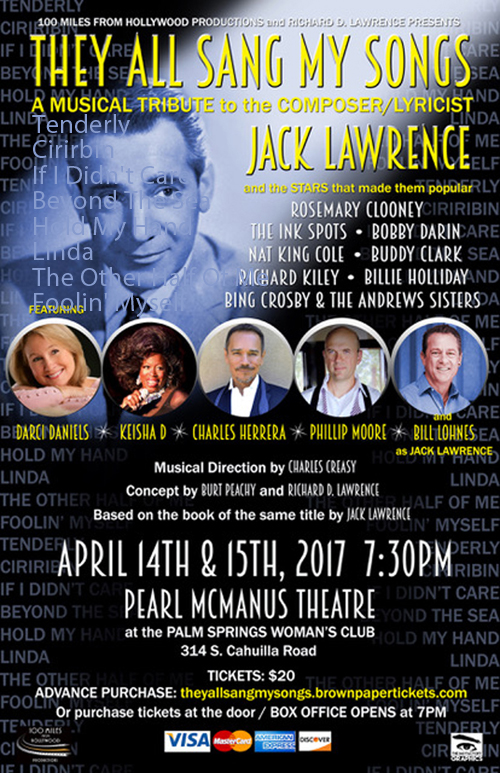