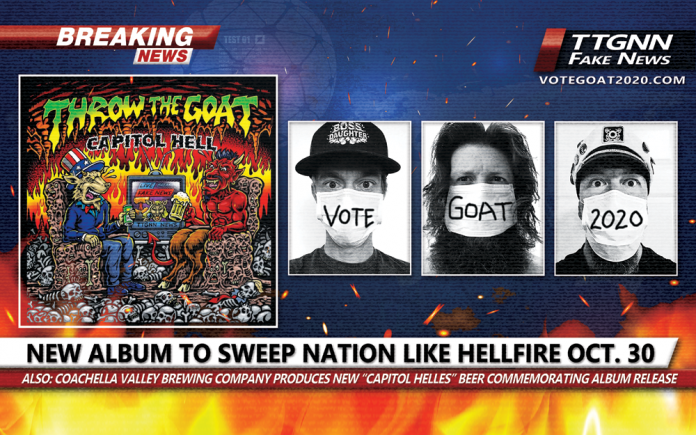 Last August (2019), I sat down with Throw the Goat just ahead of the Idyllwild Strong Benefit Music Festival. At the time, we were enjoying life as we knew it and were ready to help out those in need, recovering from a devastating fire on the mountain. While we pontificated about life and the joy of gathering at a local taproom, sipping on the sweet nectar of hops, drummer Troy Whitford hinted at what the band was planning for 2020. “Are we going to tell him about Vote Goat 2020?” The anticipation was too great to keep secret. Throw the Goat would embark on a new album and a tour- Vote Goat 2020! Six months later there was a strange virus floating across the globe and headed for the United States of America.

Flash forward- October 2020. Chaos reigns across the badlands, shelter in place orders are keeping the humans inside, riots have overtaken the streets, racial tensions are high, the Nation faces a contentious election, confusion clings to every molecule of sense, COVID-19 rules the consciousness, mouths have been masked and live music has been silenced. Is this a plot of a sci-fi? Well, not exactly but: As the Government shuts down America, One Band must risk everything and cut an album of epic sonic measure or the world as we know it will end. That band is Throw the Goat! And they have succeeded!

Their latest album, Capitol Hell, hits heavy with poignant lyrics and impending importance. The musical onslaught slaps the listener in the face with a sweet anthem, “Too High to Stay Home,” a clever plea with a bit of history. Frontman/ Screamer, Brian “Puke” Parnell says of the song’s inspiration: “Back in 1964, President Johnson ran a campaign ad that ended up being banned from TV. Known as the ‘Daisy’ video, it begins with a little girl picking petals off a flower while counting. When the pedals run out, the video zooms in on the girl as a countdown initiates and ends with an atomic bomb blast. In comes Lyndon Johnson’s voice, telling us that ‘we must either love each other or we must die.’ It ends with a voiceover urging the viewer to ‘vote for President Johnson on November 3rd’ because the stakes were ‘too high’ for people to ‘stay home.’ The intro for the album basically lifts the entire audio from this ad, with a couple modifications. Conveniently, election day fell on the same date in 1964 that it does in 2020, so we didn’t need to alter the date at all. It’s almost surprising how many people have never seen this ad or remember it.”

The album title and first track underscore the importance of the times we are living in once again. The “atomic bomb” we now face can be interpreted in many ways.

Originally, the band was planning on launching a “fake news” channel (TTGNN) at the DNC in Milwaukee, WI anticipating a contested candidacy for President. Troy said he was looking forward to putting a microphone in people’s faces and doing interviews on the streets to capture the real thoughts of the public on who they wanted to see as their Presidential nominee. The world changed, Bernie bowed out and Biden ran away with the nomination. So, they regrouped and put thoughts to chord and feelings to words they could chant out loud. The Punk Rock fuel hammers hard with a pulsing Rock and Roll retrospect in the vein of a “Garage Days” or ‘Goat House Days Re-revisited’ sort of way. The album conjures up a pensiveness that may cause a few folks to punch themselves in the face to snap back into a reality lacking a necessary mosh pit of perspective. Humanity and the quest for what will make or break or sense of humanity hums in your head long after the drums echo and the bass chords fade. Don’t worry there are some sappy break-up lyrics mixed into the thunderous blasts of purpose.

The fellas, Brian, Troy and Derek, embraced the challenges of COVID-19 closures and shutdowns to get to work on an album that tracks the moment we are in and has meaning for not only the band but for fans of America and all that is good. Without question, the situation of a pandemic, created unique opportunities like a potential Australian tour once the world opens up again as well as the freedom to focus on music and growing together as a band. Recording this album started with an exchange of emails with lyrics and then the tracks took shape from there. Troy says the process was unusual but worked in a new way of collaboration. Derek says recording a record while writing them and not being able to test live at a show gave the songs a fresh feel and was a lot of fun. Puke says the album “Capitol Hell” is a play on ‘Capitol Hill’ and like the album art reflects “the hellscape we are in.” Artist Jimbo Phillips, who has created album art for the likes of NOFX, Social Distortion, Pennywise, Blink-182, Primus, and Metallica- to name a few, took Parnell’s idea of Uncle Sam as a goat and the Devil, being the devil, sitting in thrones made of the corpses of dead politicians (seems appropriate), drinking beer and laughing and created an art piece that embodies the mood and tone of the times while holding true to the Punk Rock roots of the band.

Not being able to launch the album, Capitol Hell at a live show, while a little disappointing, provides a new way to release the record. The pandemic has resulted in a doubling of followers on their social media channels, and a growing fan base internationally. Throw the Goat is eager to share this creation and will have a release day on 10/30/2020. They plan to be streaming from a private link on their website. “Anticipate a TTG variety show with us as the hosts. It’s not really a concert like you’d expect. It’s going to be a lot more personal and exclusive than just an online performance,” says Puke. The cost of admission will be the purchase of Capitol Hell so that’s a pretty solid deal! 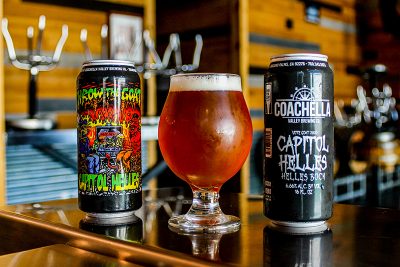 Also, Coachella Valley Brewing Co. and TTG teamed up and created a special new concoction for fans to enjoy. “We reached out to CVB a few months back to see if they’d be interested in doing a one-off beer collaboration with us. We wanted a Bock style as it means “goat” in German. They suggested a Helles Bock, and the serendipitous name was right there in front of us, so we called it Capitol Helles! They used a special new yeast and fermented under pressure (which is not the typical method) and everyone was blown away at how it turned out. They told us that it’s probably going to win awards!” It is currently on tap at CVB and will be available soon locally in other places.

For more information on the release and the band go to www.throwthegoat.net and do yourself a favor and invest in this album. Throw the Goat encourages everyone to VOTE!

Rumor has it a side project for coffee house rock is in the works.