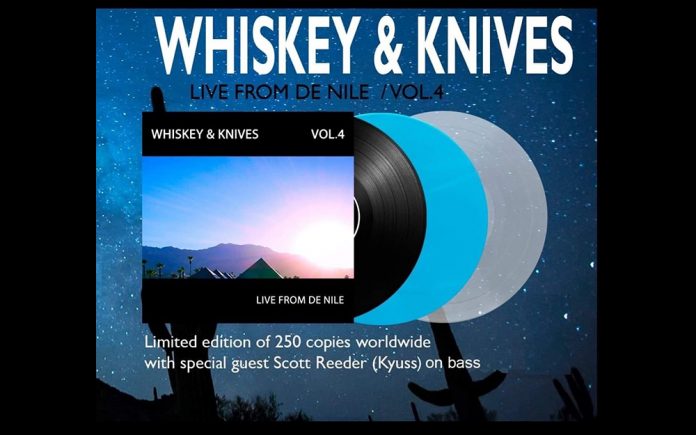 Vol 4 Live From De Nile is a five-round knock-out, drag-out fight that ends with a deadly right cross of heavy and hard Desert Punk Psychedelic Rock!

The album was released on October 2, 2020, and is available in limited press 12” vinyl through www.h42records.com. There were only 250 copies made available worldwide on black, clear and turquoise vinyl. Of course you can also find their music on all the standard pulpits like Spotify and Apple Music.

The cover of the album is both novel and esoteric. It was photographed by Colin Carnahan with the concept fashioned by the band. It appears to be the San Jacinto Mountain in the background with the pyramids of the Nile River preceding them. If you don’t know, most of the iconic pyramids in Egypt can be found on the western side of the river within the dry desert and were built close to the river so that the blocks could be delivered much easier. Whisky & Knives drummer Alfredo Hernández (Across the River, QOTSA, Kyuss) is the quintessential musician, renaissance man and, in his own right, a building block from which the pyramid of Desert Rock was built.

Having recently performed a pre-recorded live set for the Concert for Autism, the band continues to take shots and jab their way through the pandemic with live performances and their new release, also dubbed ‘The Whiskey & Knives’ Hidden Valley Reeder Ranch Dressing Sessions’.

With Jason Baseley on vocals, Jon Arnold on lead guitar and bass, Hernández on drums and special guest: Scott Reeder (Fireball Ministry, Across the River, Kyuss, Unida) on bass, Whiskey & Knives recorded the album at Reeder’s studio The Sanctuary in Banning, California and it was mastered by John Golden at Golden Mastering in Ventura, California. As alum of Kyuss, Hernández and Reeder have not recorded together in over 15 years! 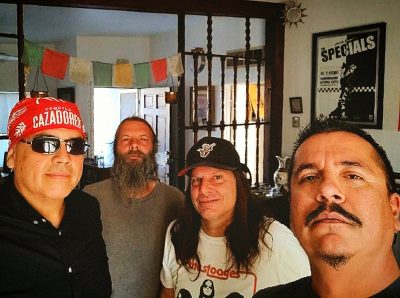 Whiskey and Knives was formed in 2007 as a warning to bloodthirsty Grizzly bears. A former member came up with the name during a camping trip where the question was posed, “What if a bear tries to attack us? We have nothing to protect ourselves except for this bottle of whiskey and some knives.” There have been no reports of bear attacks since then so it seems bears everywhere have taken heed.

Recently welcoming big-time bassist Armando Flores to the fold, much like previous illustrious bass players Mike Smith and Travis Rockwell, Flores fits right in as he has been a part of standout bands like Se7en4, Lung Cookie and B-Movie Superstars.

Flores is pretty stoked at the opportunity. He shared, “I’m super-stoked to be playing with Whiskey and Knives and ‘Desert OGs’ Jon Arnold, Alfredo Hernández and Jason Baseley! They have been bringing Desert Rock and Punk Rock vibes to the desert scene for ages! It’s been years since I’ve played in a hardcore act and these guys bring it every time!”

Having seen video of the band performing with Nick Oliveri in Sky Valley, CA not long ago and with the buzz of Vol 4, it makes me long for their first big post-pandemic gig.

Whatcha Get – A propulsive start to the album, the entire band is lit here. Hernández’ innate metronome is impeccable, Arnold’s guitar playing is fabulous, the bass is pounding and Baseley’s vocals are edgy.

Head Nurse Betty – Another great full-tilt song with a Punk vibe and fast-paced, hard-edged melody. Not sure if Nurse Betty is figurative or a real person, but if she is real, we need to party with her!

Sancha Mirage – A side chick from the city of Rancho Mirage? Nah, seems to me to be a song about the difficulty of rising and shining out of the funk that’s laced with breakfast cereals. To me, one thing this song is, is a link to the many other desert rock bands that have been brought to existence from many of the “long-established” desert rockers. I have it bad for that Arnold solo and rhythm guitar.

Brother Nature – That opening bass line is narcotic. If the album cover were any of these songs, this is it. Half the tempo of Side A, the song’s lyrics are simple, “You’re trippin’ – you’re trippin’ over, Your mind is slippin’ – slippin’ under”.

Strange Devotion – My favorite song from the album; the most breakneck tempo hardcore temp song of the bunch. They slayed this song in the Concert for Autism set. Make sure and check it out online.

Baseley’s spectrum of refined, hoarse and raspy vocals on these songs are gladly received. Arnold’s lucid guitar playing is not self-indulgent by any means. He is a well-oiled machine on the album and it goes to his personality of a somewhat hermetic dude who has a lot to articulate. Although Flores’ is not on the record, I can only imagine where he will take the already pungent bass lines laid down by Reeder and Arnold respectively. Finally Hernández’ drumming remains energetic, aggressive and immersed with accented strokes. The man just keeps etching his place in Rock history. With no Vol I-III, my inkling is the band is going backward in moving forward, whatever the hell that means!